Circolo Artistico Politecnico: the History of the Association

The history of the Circolo Artistico Politecnico of Naples dates back to the December 1888 when at Emanuele Dalbono's home all the high standing figures of the Neapolitan intellectualism met each other, in order to give new life to the Partenopean art and culture that, in a time of brand-new social changes (as well as the historical-political ones), it needed a renovation.

It was then that, since that time on, the first Artists'Neapolitan Society, a real cultural movement took place, presided over by the Prince Giuseppe Caravita of Sicignano. Soon earlier, the cultural Neapolitan activity grew so much that there has been needing a new location for all the Society's meetings (which then became a Circolo) that, until then, had been taking place into several buildings of the city, and so the brand new location was identified with the Seventeenth-century Palace, situated in S.Ferdinando Suare (the current Trieste and Trento Square).

In it all the members moved many artistic, photographical, literary and documental collections, as well as all the historical funitures until 1822: it, in fact, is composed by some diffferent thematic rooms, in which are gathered all the different proofs of this intense cultural activity which saw, above all, the birth of the journal L'Artistico, of the Neapolitan Drama Arts School and of the Chess Neapolitan Academy. During the years many presidents held the reins, and the Circolo, from Association has become a Foundation, a 'living' museum where it is possible to visit it listening to its history and that of each work.

The Circolo Artistico Politecnico is divided into four section: the Museum (composed, in turn, by several rooms); the Fototeca; the Library; and the Historical Archive.

The Museum of Circolo Artistico Politecnico 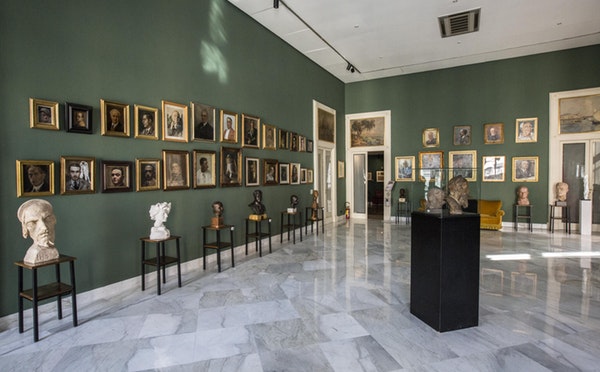 The Circolo Artistico Politecnico's Museum, dedicated to its first president Giuseppe Caravita of Sirignano (the famous Sirignano Room was, infact, named after him), was founded in 1988, for the celebration of the centennial from the birth of the Association.

It is constituited by a collection which has been growing through centuries thanks to all its members and which is still proof of what is the great Nineteenth - century Neapolitan heritage. The room, built in 1912 in liberty style, was created by the architect Giovan Battista Comencini, to whom is dedicated the major wide room.

The Museum  also hosts The Pharmacy, a small previous room that still houses all the members' caricatures and several thematic paintings, expressions of the social spirit of its members; the Matilde Serao Room (dedicated to the writer) and the Ferdinando Russo Room, designated as a library.

The Fototeca of Circolo Artistico Politecnico 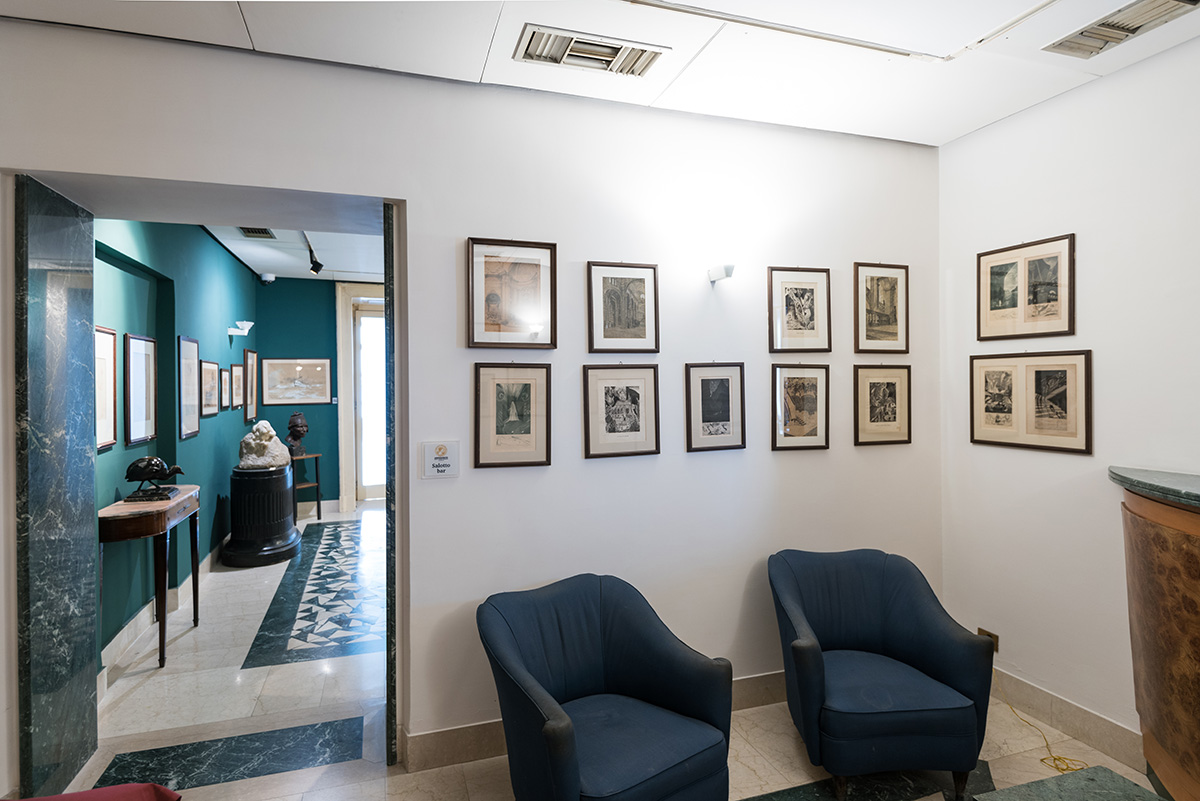 The Fototeca section is located inside a historical room of such an astonishing beauty: in it there are collected about 3500 pictures, of which only 200 are exposed and they all represent all the greatest artists and characters who were members of the Association since 1888 until today.

Every picture is characterized by an exclusive dedication of the subject painted. Among the most important characters of the Partenopean overview (and not only), we can find: Vittorio Emanuele II, Sibilla Aleramo, E.A.Mario, Giacomo Puccini, Salvatore di Giacomo, King Umberto II di Savoia.

The Library of Circolo Artistico Politecnico

The Library room is dedicate to Ferdinando Russo, a poet, journalist and author of some of the most famous classical Neapolitan songs and hosts at its inside over 3500 volumes of different sorts, which hold thoughts and writings dating back to 1678 (for example: the very first edition of the Treccani Enciclopedy).

Between them there are some which ara about artistic themes and are all printed in precious editions. Today the Library represents a relaxing place, where it is possible to research for brannd new historical investigations. The Historical Archive is the last section and represents one of the most important proofs of such an intense cultural activity. In it it is possible to get in touch with some extremely important documents, such as the first musical draft of the Giuseppe Verdi's Traviata, dated back 1856. The Association, in 2011, thanks to its incontrovertible value, received, in fact, the notification as "Archive historically interesting and particularly important"  by the MiBACT. (Ministery of Cultural Heritage)

How to reach the Circolo Artistico Politecnico by public transport

It is possible to reach the property by public transport.

The Circolo Artistico Politecnico is located at the second floor of Zapata Palace, in Trieste and Trento Square 48, few metres away from Plebiscito Square and you can reach it just taking, at the Central Station, the Line 1 of the Metro - direction: Toledo Once you get there, in a just few minutes you will be arrived at destination.

Alternatively, by bus from Piazza Garibaldi you can take the R2 line, this bus also goes to Corso Umberto and stops in front of the Teatro di San Carlo.

It is also possible to visit the Circolo Artistico Politecnico from Tuesday to Saturday from 10.00 a.m. to 1.00 p.m. and, in the afternoon, from 2.00 p.m. to 5.00 p.m. For visitors who want to book an individual or a collective visit without the guide the contribution will be of 5 euros; for those who want the guide, instead, will be of 7 euros.