5 most impressive churches in the old town of Naples: their extraordinary stories

The churches of Naples

Naples is a city rich in churches with more than 400 “houses of God”, and if we’d add all the religious monuments that number grows more than the double. Naples municipality counts the biggest number of churches in all Italy. No wonder this city is called the city of 500 domes, describing that big quantity of religious monuments.

This article is about the most particular churches in the old town of Naples that every tourist should visit and their incredible stories. Of course, in Naples, you can visit many other very beautiful churches, but these ones, that I chose, are particular not only in their beauty but much more in their story. Capella di Sansevero – Saint Severo chapel is a beautifully decorated private chapel, built on once standing temple. The owner of this chapel, Raimondo Sansevero, was a noble Neapolitan living in a revolutionary period, in the 18th century. He was a scientist that was interested in architecture, mathematics, astronomy. The Neapolitan fantasy tells that he was an alchemist who practiced unnatural, mystic, demonic experiments. In fact, in the basement of the chapel, there are two skeletons: female and male body examples with perfect vascular system “imitations”, advanced in that period. The legend says that Raimondo di Sansevero in some way managed to crystallize these blood vessels using two real human bodies.

There is another mystery in this chapel. One of the most beautiful art examples in Naples “Christo Velato” (Veiled Christ) made by Giuseppe Sanmartino. The sculpture is a wonderful, detailed artwork of Christ body covered in veil after the crucifixion. The sculpture is made out of one single marble piece and the scene seems so realistic, that for a very long time was thought that maybe it was a real veil crystalized to the sculpture. By the way, Veiled Christ is at the first position in all kinds of list of “Top things to see in Naples”. It’s opened every day except on Tuesdays.

Hope you’ll find these tips useful and the churches amazing. Come to visit the religious-cultural side of Naples

A church dedicated to Art and silk: The Church of Saints Filippo and Giacomo 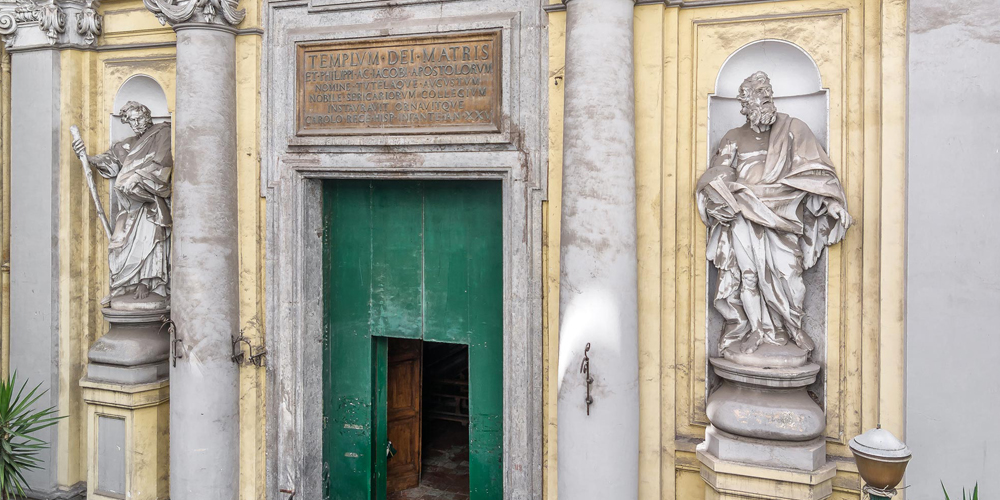 Chiesa dei Santi Filippo e Giacomo is a church keeping the memory of silk art in Naples and you can learn more while on a guided tour inside the church. Naples used to be a very important city for silk production in 1580-1630. The Neapolitan silk was appreciated and considered one of the best ones in that period. Santa Maria delle Vergini and San Silvestro, two churches that later connected and became the church of SS. Filippo and Giacomo protectors of the silk makers, was the complex where the silk was prepared by little, from 5 to 14 years old girls. Also, this church is decorated with SS. Filippo and Giacomo sculptures made by Giuseppe Sanmartino, the author who made the sculpture of Veiled Christ of Sansevero Chapel.

Skulls and bones in a church? Santa Maria delle Anime of Purgatory in Arco 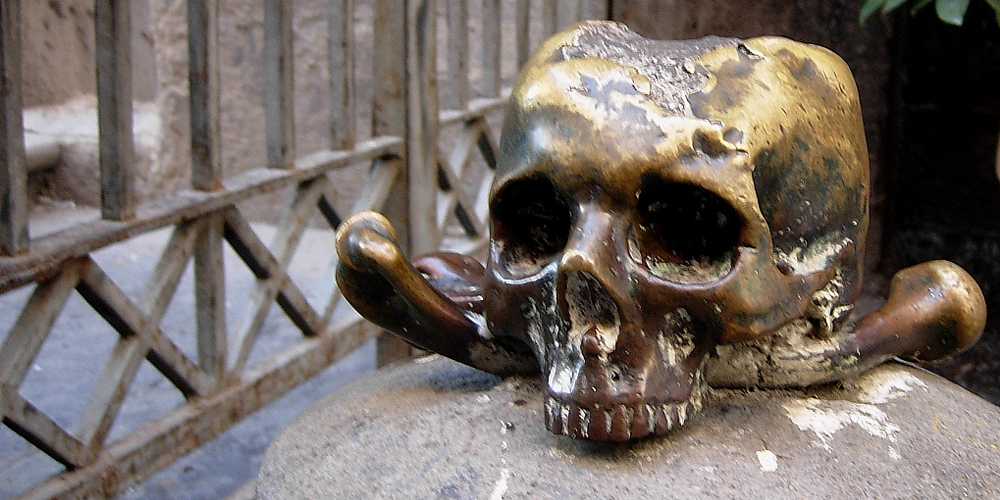 Church of Santa Maria delle Anime del Purgatorio ad Arco is a Baroque style church build thanks to the initiative of the Neapolitan nobles of that era. This sacred place was dedicated to the poor Neapolitan people that had no home or family that could take care of their funeral.

It was not only a church, but also a burial place of those poor people. Inside the church, underground, there is another church-museum Museo dell'Opera Pia Purgatorio ad Arco full of 16-19 century liturgical objects. From this underground church is possible to reach other underground spaces – tombs, where these poor Neapolitan people were buried.

Santa Maria delle Anime del Purgatorio ad Arco or simply Purgatorio ad Arco is a very unique church not only because of its story and not only because of its artistic treasures, but mostly because of the decorative motives on the facade - skulls and bones, on the portal, side niches and also surrounding the facade just in the street. It’s not a rare thing to see a passing by Neapolitan that is touching one of these skulls that surrounds the complex in the road. It’s thought that the touch of a skull may bring you luck.

The monastery of Santa Chiara: a monumental area

In the same square, almost in front of Gesù Nuovo church stands the monastery of Santa Chiara, a very big contrast to a previously mentioned sanctuary. One of them sparkle richness of the colored marble and the other one is a simple, very spiritual place. Founded in 1310, this monastery was shared by two different convents. The church belonged to “Frati Minori” monks, while “Clarisse” sisters where gathering at the sides of the altar to sing in the choir. These two groups were completely divided and the only way to communicate between them was through the confession.

Santa Chiara monastery didn’t always have the same aspect. In the 18th century it was renovated in Baroque style, but after the WW2, highly damaged, was rebuilt as a typical 14th-century church.

Santa Chiara monastery is a famous touristic point for the tombstones of the greatest nobles that lived in Naples and for the wonderful rococo style inside-garden.

In the heart of the historical center of Naples: the Church of the Gesù Nuovo

In Piazza del Gesù (Jesus square) there are two very particular churches. First of them is the church of Gesù Nuovo, built in 1470. In the facade keeping a stone masonry of a previously standing palace that belonged to Saverino, a noble family from Salerno. This family was against the king, always in rebellious attitude and always trying to provoke the royal family; just imagine how arrogant of Saverino was to build this palace just in front of Maschio Angioino castle, conceitedly looking at it from a higher position. So, the king took his revenge expelling all the family out of Naples and after that, he gave this building as a present to the Jesuits, who transferred it into a church.

Now, this richly decorated in marble church is attracting many tourists to admire this unique piece of art. Notice how many confessionals; some of them have even the “working hours” written on a piece of paper. So, if you feel like you have to confess your sins and you prefer one priest more than another you can come whenever your priest is working in the confessional.