5 works of art absolutely not to be missed in Naples

The artistic heritage present in Naples has few equals in the world. The quantity, but more importantly, the quality of cultural sites in the city manages to hold an incredible number of masterpieces. Most of all, the variety is astonishing, as it ranges from sculptures to paintings, from classical to contemporary art.
For the occasion, we tried to select 5 masterpieces in particular. They ranged from unique sculptures to paintings of profound and priceless beauty. The difficulty was enormous, given the vast choice, but somehow we made it. We have to clear, there aren't any ranking, it would be impossible to think about it!

5. The Vesuvius of Andy Warhol

The first masterpiece we talk about it's the youngest of five. It's the Vesuvius of Andy Warhol, one of the work art the most iconic of the father of american pop art. Warhol presented the Vesuvius at Capodimonte Museum in 1985, where it is nowadays. The presentation was along with 17 other canvases dedicated to the same theme and made with contrasting color combinations and tones, between joy and drama.
In the work, Andy Warhol depicts Mount Vesuvius at the moment of its eruption, representing the grandeur and omnipotence of the volcano in full pop art style. Each of the canvases presented differs in the phases of the catastrophic event, but the themes are always the same: the legacy of art history and the omnipotence of death. Warhol's aim was to create a unique work that recalls the full vitality of the city, combined, however, with the impending danger of destruction. In short, life set against the end, against death.
Naples stirred Warhol's imperishable and unique emotions, and the Vesuvius series is certain proof of this.

4. Virgin and Child with Two Angels of Botticelli

With the second masterpiece we remain at the National Museum of Capodimonte. In fact, we are now talking about the Madonna and Child with Two Angels, a painting dated 1468-69 by Sandro Botticelli. Initially the work was attributed to Lippi, another Renaissance artist. Only later did some studies attribute it to the multifaceted Florentine painter. The dating was not certain at first either, but later characterization of the details and faces led to the 1470s period.
Botticelli created the painting in tempera on panel technique measuring 100 x 71 cm. Here we find depicted the Madonna with the Child on her lap along with the two Angels helping her. In the background we find a wall surrounding them, still further behind is a fragment of a rocky landscape, defining spaces by scaled planes. The colors are all very light, almost tending toward bronze. The face of the Virgin is clearly in the style of Botticelli. In fact, it is very similar to that found in the Madonna of the Eucharist, that is, with an oval head and a slightly pointed chin.

The first of the two sculptures we will present in this list of masterpieces is the imperious Hercules Farnese by Glycone of Athens. We are talking about a 317-cm-high marble statue dating from the third century B.C. currently housed in the National Archaeological Museum in Naples. The statue is a copy of the bronze original created by Lysippus in the 4th century BC. It is part of the Farnese collection and was found in Rome at the Baths of Caracalla in 1546 missing some pieces. Guglielmo Della Porta, a pupil of Michelangelo, restored the sculpture with the missing parts, and even when the originals were found, they opted to leave the restoration in place.

Visit the MANN with the Naples Pass❯

The statue leaves one stunned at first impact, given its imperial grandeur at times imposing. The Hercules represents man's triumphant victory over the gods and the trials they subjected him to. Hercules, son of Zeus, had the chance to achieve immortality. He was the savior of all mankind, although in each case he had flaws such as lust and greed, which are common to man. In fact, Lysippus' goal was to represent him in his humanity, thus depicting weariness and fatigue, as he was intent on resting on a club.

2. The Flagellation of Christ

Caravaggio was one of the best representatives of Western art of all time, capable of influencing the discipline from the 16th century to the present day. Emphasizing his close relationship with Naples seems more than necessary to give further luster to the Neapolitan city. Here he stayed twice for a total of two years. Part of his early Neapolitan period is the Flagellation of Christ, a painting made between 1607 and 1608 currently housed in the Museo Nazionale di Capodimonte. It is one of the symbolic works of the painter's mature production.
The iconographic representation of the painting is the classic one: there is Christ tied to the column with the three torturers around him. However, a novelty with respect to traditional canons should be highlighted. In fact, Jesus is already wearing the crown of thorns, whereas tradition has it only after the scourging. Light in Caravaggio's art has always meant salvation. Here it is focused on the figure of Christ, as if opposing with concrete force the torturers clothed in shadow and darkness. Given the contrasts of light and shadow, the work represented an important novelty in art, a new way of painting and representation of reality. 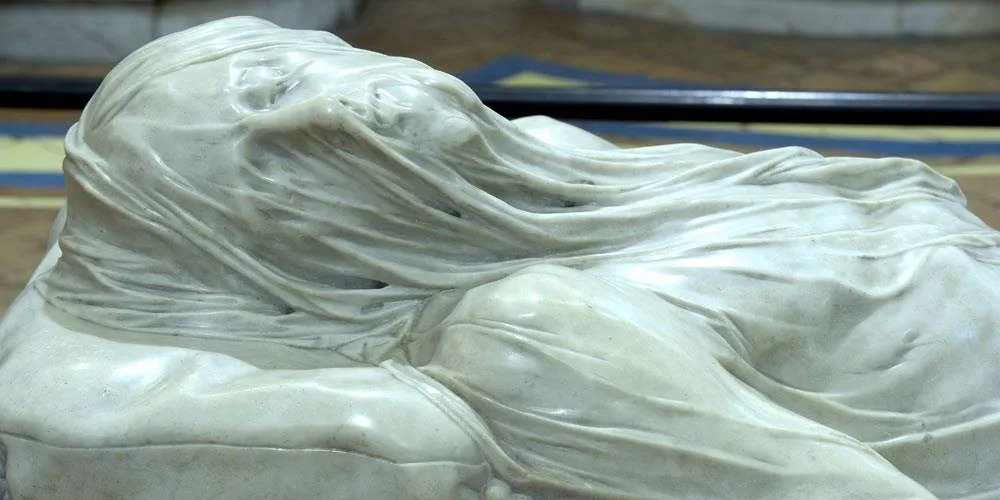 We close with perhaps the most incredible work of the five for its composition and its unique style. We are talking about the Veiled Christ, a 1753 marble sculpture by Giuseppe Sanmartino. The work is currently preserved in the Sansevero Chapel. The commissioner of the work was Raimondo di Sangro, who commissioned Antonio Corradini. The latter, however, after completing a first draft, died, so they then turned to Sanmartino. The commission was to represent Jesus Christ covered by a transparent shroud made from the same block as the statue. However, the Neapolitan sculptor went much further, giving it a unique, almost real magic and features.
Indeed, Sanmartino gave late Baroque traits to the work, managing to give almost natural features to the sculpture, fleshing out the lifeless body. The folds of the veil, so sharp and deep, define a deep, human suffering. The feeling is that their covering almost further denudes the body, making it more exposed to pain. The purpose of the whole work is to represent the fate and redemption of all humanity.
Surrounding the incredible constitution of the veil are numerous interesting legends. Among them, there is the one according to which the basis of the process of making the veil is Raimondo Di Sangro himself, who commissioned the work. He was a great alchemist, and thanks to his knowledge, he would lay a real veil on the statue, then leave it marbled through a chemical process. In fact, there is no doubt that the work was made entirely of marble. This is borne out by Sanmartino's own letters and documents. Among them, there would also be one of his payment receipts signed by the Prince and kept in the Historical Archives of the Bank of Naples dated 1752.
Seguici sulla nostra
pagina Facebook