Banco di Napoli: the Exhibition about the oldest Bank of the World

Banco di Napoli: the history of the bank in an exhibition

From the 26th of November 2020 to the 28th of February 2021, it's possible to visit (during the weekdays live otherwise online), in Museo di Napoli - Collezione Bonelli at the House of "Casa dello Scugnizzo" Foundation, an exhibition that tells about the history of the Bank of Naples, the oldest Bank in Italy. It's a collection of documents and things that recount the history of the Bank since 1463.

The Exhibition was strongly supported by Gaetano Bonelli, a journalist and creator of a Museum about the city of Naples, in which in the course of more than six years, he had collected extraordinary finds of the Bank of Naples. To date, it's the most important collection about the Neapolitan Bank.

The history of the origins of the Bank of Naples

Banco di Napoli (Bank of Naples) was one of the most important and oldest banks in the world. Its origins date back to the so-called public banks which were born in Naples between the 16th and the 17th century. In the beginning, it was a mount of piety, an institution pawnbroker run as a charity. The bank was founded in 1539 under the name of Banco della Pietà (Bank of Piety) and it was a bank that used to give interest-free loans. According to some scholars, its origin may be dated back to 1463, when Casa Santa dell'Annunziata was founded in Naples. This would make the Bank of Naples the oldest bank in continuous operation till 2018, world-wide.

After the Unification of Italy, the Bank takes the name of Banco di Napoli. During the years, also its headquarters changed: it moved from St. Biagio dei Librai to Via Toledo.

Casa dello Scugnizzo Foundation takes care of needy children and their families for over 60 years. Indeed, it's a socio-educational reality rooted in the Neapolitan popular districts, in which for decades it has been active, not only to prevent social discomfort, deviation and exclusion but to promote the participation to the citizenship rights and the overall community development too.

Its President Antonio Lanzaro felt honoured to have met Gaetano Bonelli, who has always been present for the Foundation as well at to organise this prestigious museum collection. He thinks that the Bank of Naples Exhibition contains pieces of incredible value, both from historical as political-economic point of view. 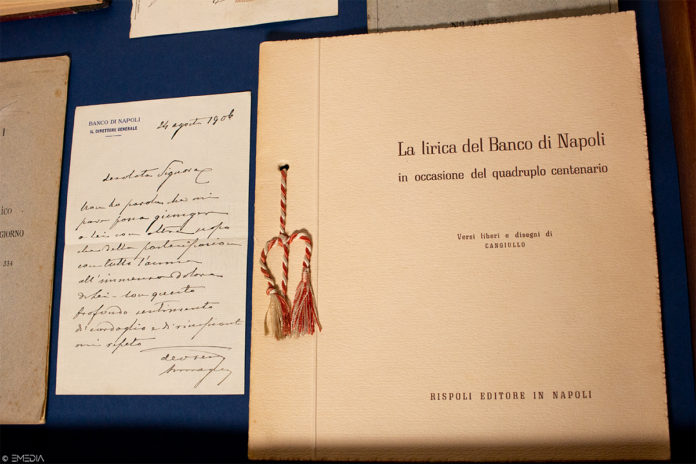 The exhibition wants to be a trace of identity and memory, by first looking back at the past and then forward to the future. The material displayed, of great historical interest, was collected by Gaetano Bonelli with great care and selected with the help of Giovanni Ardimento, a historian and numismatist, contact person of the economic area in Museum of Naples, which boasts a collection of twenty thematic areas.

Many things have been recovered from antiquarian bookshops, markets, auction, trading with collectors, donations. They offer the possibility to know a cross-section from the early 18th century to the second half of the last century. They are very unique, unknown or rare reports, by which we can know what was and represented the Bank of Naples.

One of the rarest testimonials is a pamphlet of Francesco Cangiullo about the Opera in the Bank of Naples, which was printed in 1939 in limited-edition on premium paper for 125 copies, as many as they were the employees in the Bank of Naples. The displayed copy is the only one currently existing of that edition because, after the fall of fascism, the writer regretted writing that piece which contained echoes of anti-Semitism and references of praise to Mussolini. For this reason, he retired all the copies of this book that not appear in his bibliography neither.

Other pieces of rare value represented by some bank papers signed by historical characters of Naples, such as General Pietro Colletta, Gaetano Filangieri Jr., Francesco Saverio Mercadante. But also photos of the old house quarters, medals, the birth certificate of the Bank of Naples, old coins and banknotes from the early 1900s.

Info: how to participate in the Banco di Napoli exhibition