Both loved and hated by his peers, doomed to almost two centuries of oblivion and rediscovered only around the middle of XX century, Caravaggio is now considered one of the most important painters all over the world, among the founders of baroque and forerunner of modern painting.

He lived in Naples twice, during a troubled period of his life when a death sentence for murder loomed on him. Today the city hosts three of his most important artworks.

Let’s go to know them together.

The Seven Works of Mercy This canvas dates back to 1606, when Caravaggio stood in Naples for the first time, thanks to the Colonna family’s kindness. It’s a huge oil painting that overturns classical iconography. The seven acts of mercy were usually represented in seven different scenes, Caravaggio instead portrays them all at the same time, in the lower part of the canvas, while the upper part is dedicated to the Virgin, inserted by the buyer’s will. The Mother of Mercy was a beloved figure that usually occupied, alone, the middle of the paintings. Here instead she’s off center, accompanied by angels and by Baby Jesus.

The action is complex, agitated, there isn’t a true focus for the narration and the whole scene is defined by a strong chiaroscuro which emphasizes the divine light as a representation of Grace and, indeed, of Mercy. It’s noteworthy that all the characters are portrayed as common people. That’s because Caravaggio didn’t believe in the formal charity of upper classes, but only in the spontaneous generosity of people towards other people.

This painting became fundamental for Neapolitan baroque: form Caravaggio the artists working in the following decades learnt the visual and emotional intensity, the strong naturalism and the extreme expressiveness.

The Seven Works of Mercy can be admired at Pio Monte della Misericordia, in Via Toledo n° 243.

The Flagellation of Christ 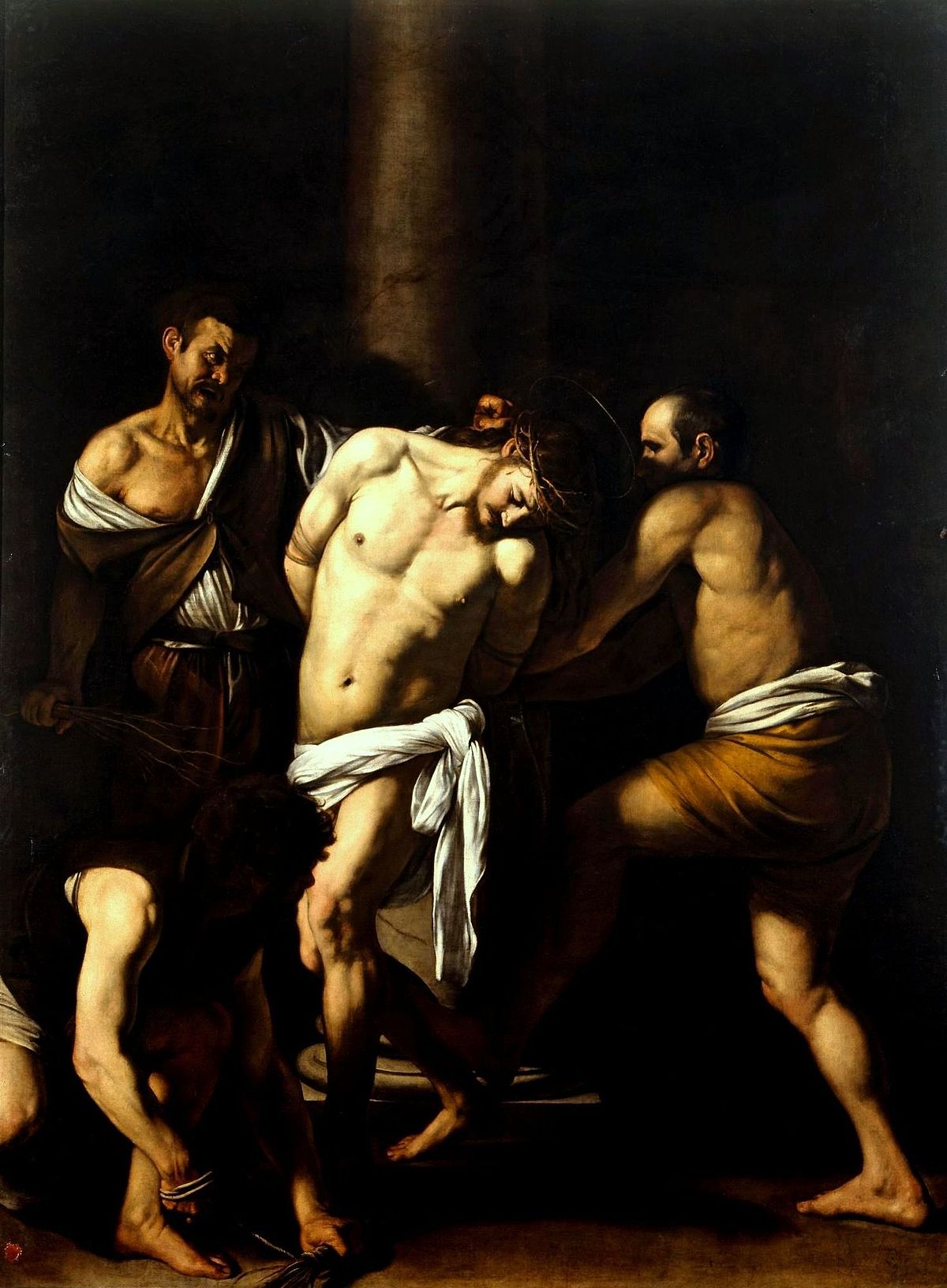 Probably this painting too dates back to the first trip of Caravaggio in Naples; it’s another oil on canvas of monumental proportions, originally destined to the Church of San Domenico Maggiore. Mostly it’s based on a canvas on the same subject by Sebastiano del Piombo.

Actually the iconography here is the classic one, with Christ at the Column and his three torturers around him. What is new is that Jesus already wears the spine crown which instead, according to the tradition, was put on him only after the flagellation.

The light, which for Cravaggio always means salvation, shines fully on Chirst, as if it came from the solid, chiseled mass of his own body. His persecutors arise from a deep, dark shadow, but they are at least partially lit by it. It’s a symbol of christian mercy and of the strength of absolution.

The painting is housed in Capodimonte Museum, in via Miano n°2, easily reached from the Historical Center thanx to the Capodimonte Shuttle, leaving every hour from Trieste e Trento square.

The Martyrdom of Saint Ursula 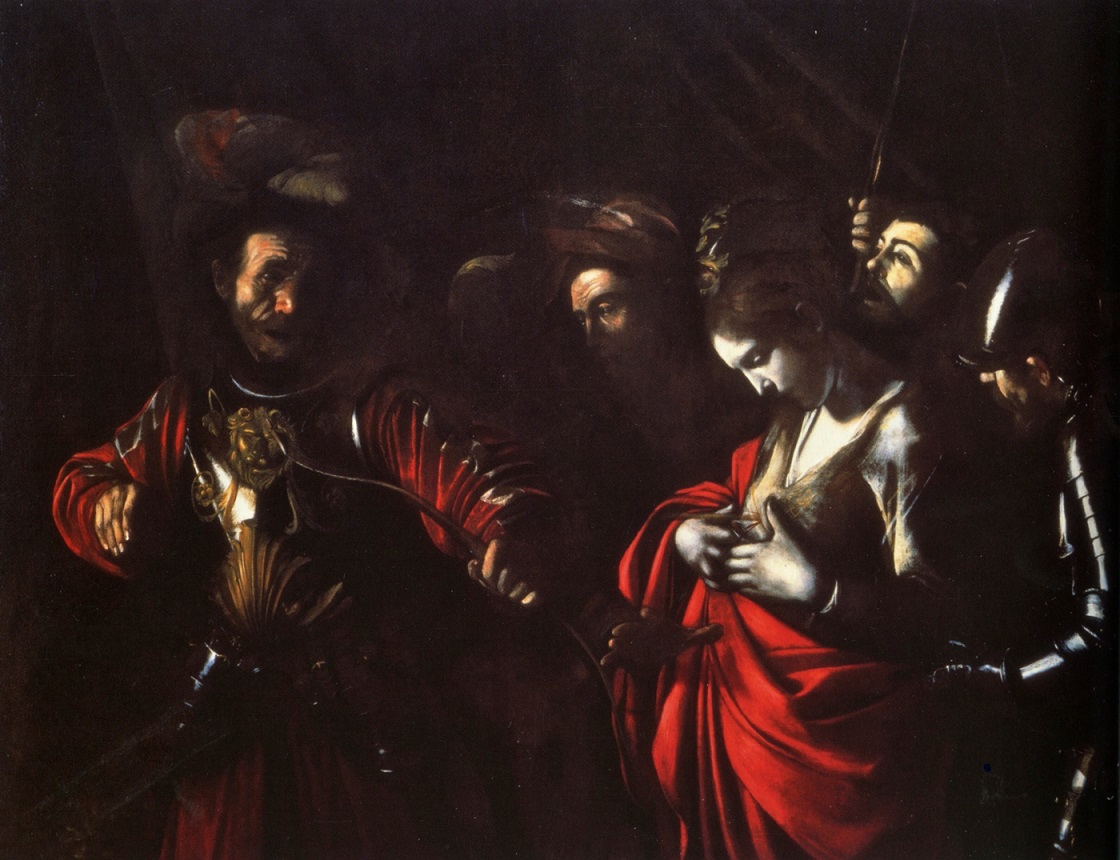 Caravaggio stood in Naples a second time, starting in 1609. Of his second Neapolitan period the only work remained to the city is the Martyrdom of Saint Ursula, his last painting. It was made for the Genoese banker Marcantonio Doria, whose family believed to be blessed from Saint Ursula.

In this case too Caravaggio entirely alters the classic iconography, to the point that for his peers the subject wasn’t immediateley recognizable.

Here we have Attila the despot while he pierces the virgin Ursula, guilty of refusing his courting. The livid color of her skin forsees her death, but she looks resigned, almost detached, as if she were already above wordly dramas. Next to the woman, besides the ruler of the Huns who seems horrified by his own act, there are three men, his subjects; one of them has Caravaggio’s looks. His shocked face is a statement of the artist’s emotional involvement before the tragedy that’s taking place.

As in the previous ones, in this painting too the chromatic contrast is strong, but here it looks like the artist gave more room to the dark tones which add more drama to the scene. According to some critics this choice also proves that Caravaggio himself was going through difficult times.

Since he was sentenced to death, the artist was in the process of obtaing clemency. Hence he left Naples in such a hurry that on the day of his departure the canvas had not even dried yet.

Anyway Caravaggio didn’t make it on time to get the Pope’s mercy. He died while traveling, in circumstances that as of today are still not entirely clear.

See the 3 Caravaggio paintings in Naples with Naples Pass

Coming to the city you will want to admire all 3 paintings by Caravaggio in Naples, that's sure.
Many tourists who think of visiting so many museums and art galleries during their stay decide to do so by purchasing Naples Pass.
The Naples pass is a card for museums in Naples that will allow you to access special discounts and concessions in the main museums and art galleries of Naples, including the 3 that host the works of Caravaggio, thanks to the partnership with Campania Artecard, as well as in many activities and attractions. The Naples Pass can be purchased in advance and activated once you arrive in Naples, which is why many tourists buy it during the planning of their trip to Naples.

Find out how to buy Naples Pass❯