Mysterious paintings in 3 churches of Naples

Naples is the casket of fascinating hidden treasures. If you want to uncover the veil of mystery lying on the face of this enigmatic city, then follow the straight lines that we are going to give you and let yourself be surprised by these three mysterious paintings placed in streets and places of Naples rich in history, art and beauty:

1. St. George and the Dragon

Go to Via Duomo, a street traced by the footprint of the art, and explore the ancient Church of San Giorgio Maggiore, named after the warrior martyr. This saint is one of the most impressive Christian figures, which links to the imaginative myth of the Dragon; an emblem of the infinite struggle between good and evil.

The basilica was built by the will of Bishop Saverio of Naples between the end of IV and the beginning of the V century AD.

Behind the main altar wrapped in a semicircle of white columns, you can admire two masterpieces of Neapolitan painting of the sixteenth century. The two majestic canvases which are harmoniously arranged facing each other were painted by Alessio D’Elia. The canvas on the left side represents the “life of San Severo” while the one on the right side depicts the battle of "St. George and the Dragon."

It is just behind the second one that lurks the surprising painting depicting the same subject. A sturdy chassis with hinges on which D'Elia's canvas is situated, moves through a rope like a massive book that opens and reveals the magnificent painting behind.

The hidden fresco which is still intact today, has been brought to light by a recent restoration. Its colours are still brilliant. Aniello Falcone realized it around 1645 and its artistic value astonishes. The work has an intense emotional charge and a striking impact. It brings the spectator back to the fairy-tale atmospheres of the medieval myth. Anyway, why was it hidden for all this time?

The protagonist of the scene is the white horse that is driven by the hardened warrior San Giorgio, who pierces the monstrous creature with a sharp lance pointing straight at its mouth. The dragon seems like an extraordinary beast of pure fantasy fighting the warrior. Below its feet, we can see its meal: young innocents reduced to carcasses. In the background, a woman flees in fear. Killing the dragon, San Giorgio saves the king's young daughter, who was about to be sacrificed to the immoderate creature and he frees the Libyan population of Selem from his lashes.

2. The Devil of Mergellina 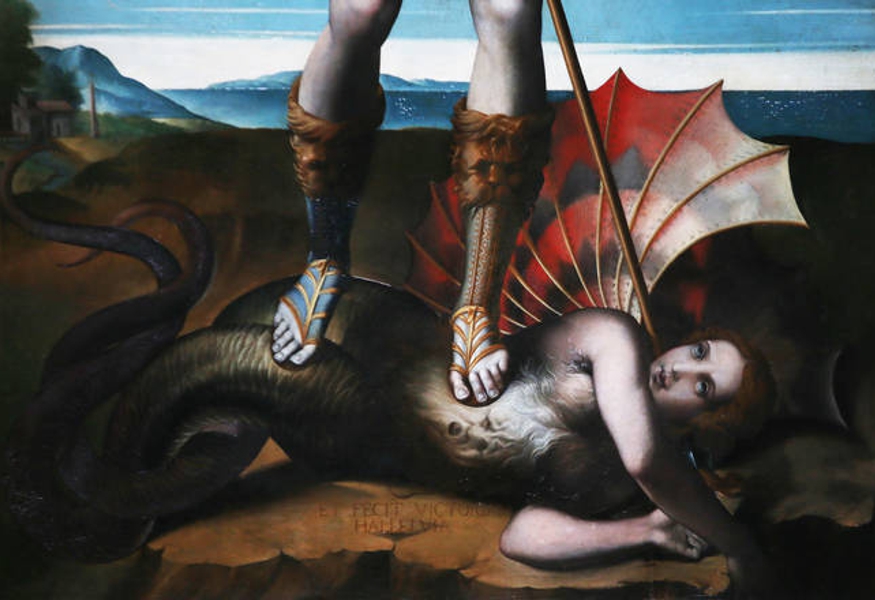 Still talking about mysterious paintings, placed in the celestial scenery of Mergellina, the Church of Santa Maria del Parto houses a panel depicting a diabolical subject. It is about San Michael that drives away the devil, a painting also known as "The Devil of Mergellina", painted by Leonardo Grazia from Pistoia in 1542.

Still talking about mysterious paintings, placed in the celestial scenery of Mergellina, the Church of Santa Maria del Parto houses a panel depicting a diabolical subject. It is about San Michael that drives away the devil, a painting also known as "The Devil of Mergellina", painted by Leonardo Grazia from Pistoia in 1542.

The panel depicts the warrior figure of the Archangel Michele, who drives the devil out of the sky. The devil has the face of a beautiful blond-haired woman. Anyway, it seems that the painting conceals a more mysterious and extravagant story, halfway between sorcery and seduction.

The devil-woman depicted in the painting represents Vittoria D'Avalos, a beautiful Neapolitan noblewoman who fell in love with the fascinating Diomede Carafa, the Bishop of Ariano Irpino. She used a powerful love spell to try to enchant the churchman and get him to love her.

The elixir consisted of some sweet pancakes and the whitewash that the beautiful Victoria offered Diomede. The man tasted those delights but suddenly an insane passion began to devour him. He could not get Victoria's image out of his head. This compromised his vow of chastity, his honour, and his ecclesiastical career. Victory was his devil; his temptation in the shape of a woman.

Diomedes thought he would use a good exorcist to break Victoria's spell. He summoned a monk expert in necromancy, magic and exorcism, who was authorized by the Cardinal of Naples. The monk advised Diomedes to find a valid painter and commission him a special painting whose colours had to be mixed with a special balm, useful for the ritual.

After this, the woman renounced the love for the cardinal. The cardinal, in order to celebrate his victory, made engrave the following inscription on the work:

3. The panel with the Crucifix speaking to St. Thomas Finally, with regard to mysterious paintings, in the lively historic centre and within the prestigious home of the Dominican Friars, it is worth to admire the panel titled "The Crucifix".

It is considered miraculous because it was identified as the painting that spoke to St. Thomas Aquinas during his last stay in Naples in 1273.

This is a rare example of 13th century paintings in Campania, which the religious tradition has preserved to date. The work is dramatic and intense. A picturesque and gentle humanity comes from the anonymous artist's brushstrokes that made the work.

According to the legend, the miraculous Crucifix said to St. Thomas Aquinas the following words: "Thomas, you have written well of me. What reward do you want?” The saint replied: "Nothing but you, Lord."

The original painting is right in a cell of the convent where the saint lived and taught. In addition, his copy is preserved in the church precisely in the “Cappellone del Crocifisso” (Crucifix Chapel).