Naples and its fountains: an exciting tour through eight of them

How many fountains are you able to count in Naples? If you stop and think about it, you’ll see that Naples is a city full of fountains, that is almost impossible to count them all. That’s why we’ve listed those that we think may capture your attention. 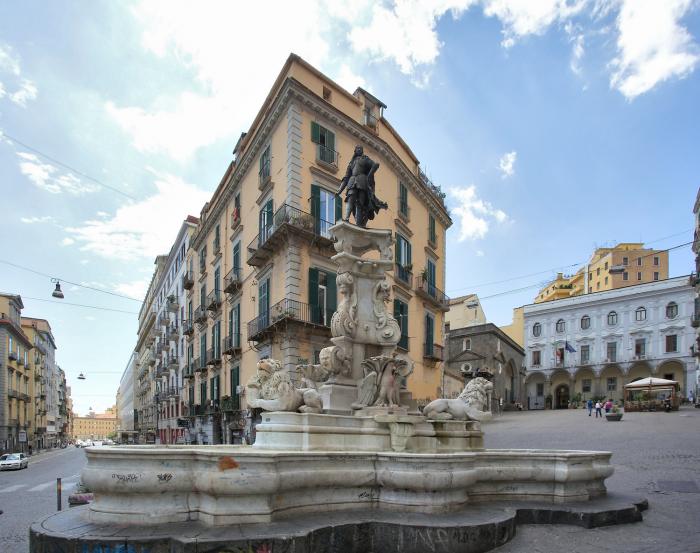 Monteoliveto’s Fountain is located in Monteoliveto Square, a few metres away from Dante Square, and was first built by Bartolomeo Mori and Pietro Sanbarberio on commission of Charles II of Hapsburg. The fountain presents the statue of Charles II on the top and three lions on a base, where their paws are supported with the stems of the city and with three eagles that present on the external base three little shelly-shaped bowls, supported by a coil as well. The Mermaid’s Fountain is one of the most beautiful fountains in Naples and is located in Sannazaro Square. It was built in the mid-19th century and consists of a circular bowl dug out under the little gardens, on which are located four sea-animals with a mermaid on the top that holds a lyre in the hands. 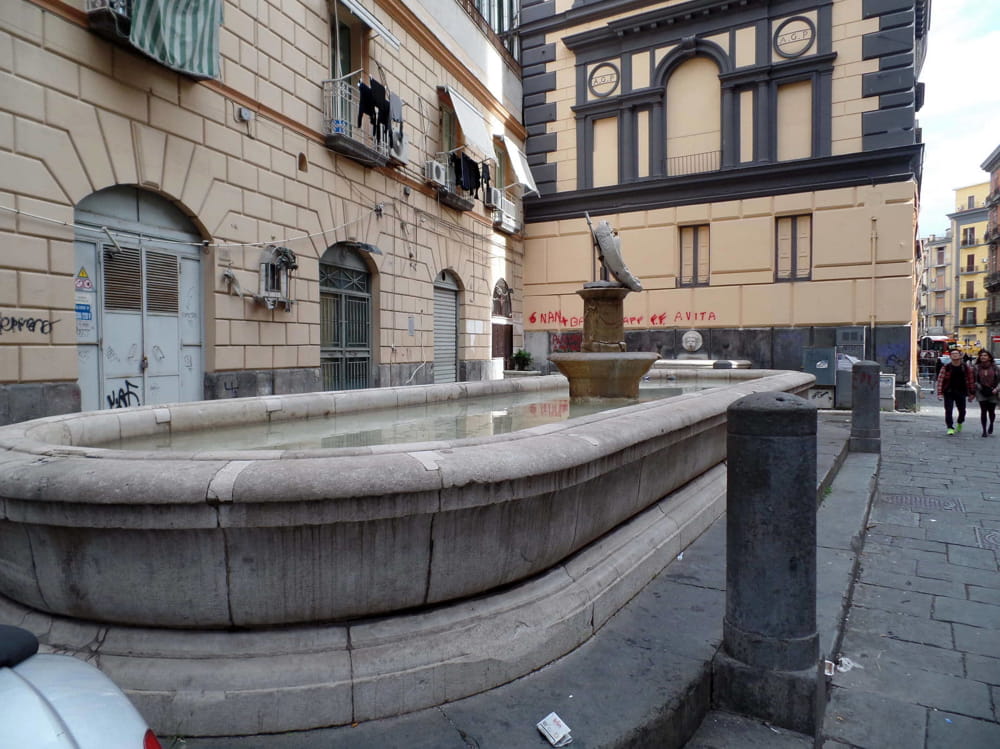 Along Umberto I Avenue, in Egiziaca Street near Forcella, it is possible to find a fountain with a peculiar name: the Scapigliata’s Fountain. It was first built between 1539 and 1541 and commissioned by Don Pedro of Toledo. The name comes from its water jet that used to pour out and shatter against a cliff-shaped stone, set at the center of it. Later, in the second half of the 19th century, the stone itself was destroyed and substituted by a column overcame by a stem in front of the hospital. 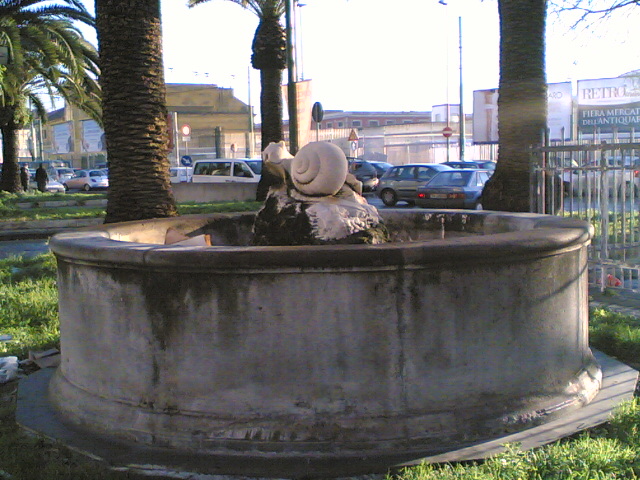 On the road that takes to Alcide De Gasperi Street, into New Marina‘s area, raises a little fountain, built in 1554 and extended in 1770. Its peculiarity ( that also gave the origins to its name) is a little snail on a cliff from which the water poures out into the bowl. In ancient times, it was adorned with flowers to celebrate the First of May’s holidays. The big arc that extends upon Big Archive Square is part of this particular fountain, first ordered by the viceroy Inigo Veléz de Guevara de Onate. It was built by Cosimo Fanzago around 1649 and 1653, and then traslated into the current Sellaria Square, in 1903. The monument consists of a poligonal bowl made of white marble and set among two vertical architectural elements, while the two little bowls on the inside got the water from the mouth of some big masks. The lateral arches are composed bu two headstones: the first one, with the inscription ordered by Onate; the second one, set later in 1906 after its relocation in 1903. Peculiarity of this fountain is the fact that on both sides of these arches, are located four little bowls that used to gather the water from some little masks.The fountain, as we said before, rises on the western side  of Sellaria Square, where- in ancient times- was located the People’s Costituency. 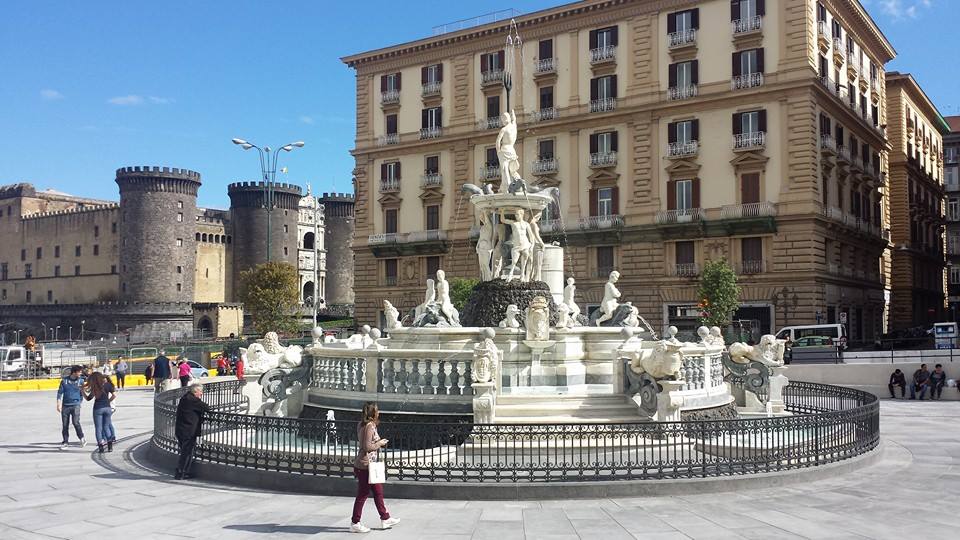 In Municipio Square today it is possible to see one of the most important fountains of Naples: the Neptune’s Fountain. This was firstly located in Bovio Square but, after some thorough restoration works,  it has been traslated  in front of San Giacomo Palace within all its magnificence. It is a kind of fountain different from the others: the circular shape lets the water pouring out through four lions set on a balustrade, from which emerge four stairs diametrically opposites. These lions have got at their feet respectively the shield of the city and of the Duke of Medina, as result of the original idea by Cosimo Fanzago. In the central part of the fountain we can find two sea monsters that pour the water into a bowl decorated with the stem of the Spanish reign, represented by a lion, a castle, a pole and an oblique cross. On the borders, four dolphins ridden by a  crested newt and at the centre the Neptune statue with the trident, supported by two satyres and two nimpheas.

On the seafront of Naples, in the road between Partenope Street and Nazario Sauro Street, rises the Giant’s Fountain, also known as the Immaculatella’s Fountain. These two denominations are due to its collocations. The first one has been in Largo Palazzo (the current Plebiscito Square), where raised the ancient statue of the Giant; the second one has then been in the current point in 1906, after many attempts to transfer it once again.  Its construction goes back  to the beginning of the 17th century and its realization was first attribuited to Pietro Bernini and Michelangelo Naccherino. The fountain consists of three arches on which are located the big stems which symbolize the city, its viceroy and the king of that historical period. In the central arc the bowl is decorated with two sea-animals which firstly substituted the mermaids. On the lateral arches two fluvial statues hold in the hands some sea-monsters from which the pouring water use to fall in the bowl below, and, on the extremities, two caryatides which support two cornucopias. 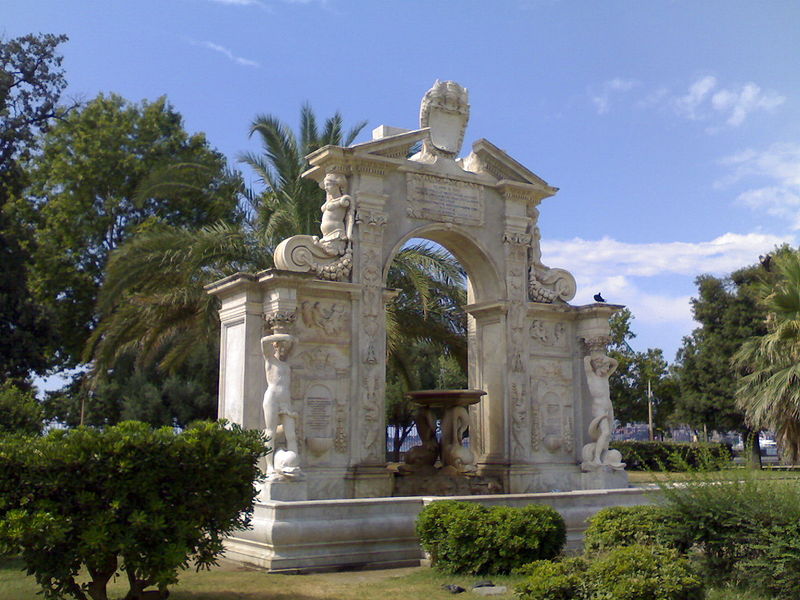 As for the previous ones, also for the Santa Lucia’s Fountain there have been different collocations. The first one took place in 1620, when  the cardinal viceroy Gaspar de Borja y Velasco decided to move it forward to the sea in the middle of a beam, also called “of the sulfurous water”, from which it was possible to draw water from it. The second collocation took place in 1606 and was mentioned into an inscription that was later put away. Then, in 1844, by will of Ferdinand II of Bourbon, in occasion of his son’s birth, Alfonso, count of Caserta, it was restored by the architect Carlo Bonucci, who placed two inscriptions laterally:the first on the right and the second on the left. The fountains today still holds the original characteristics: the central part with two dolphins and on the sides two capitals from which the water pours out. On the top, the broken stemsupports two little arches on the sides and a central bowl gathers the entire fountain and the water that still today pours out.