Naples during the Christmas festivities: you could meet the zampognari!

Walking through the streets of Naples during the Christmas holidays, with a little luck, we could meet the “zampognari” and be captured by their music.
Lo “zampognaro”, who play the “zampogna”, performs the traditional Christmas songs and novenas: simple music of ancient origins, always considered auspicious.
The zampognari are very important figures for the Christmas and folkloristic tradition of Campania and many other areas of central and southern Italy, such as Molise, Abruzzo, Lazio, Basilicata, Calabria, Puglia and Sicily. The “zampogna” is a wind musical instrument made of skin of animal skin (goat or sheep) in which wood sound reeds are grafted. The bag swells and the musician can catch his breath every time: the sound never stops.
The zampogna is similar to the bagpipe but it should not be confused with it: the differences concern the number of melodic reeds and the geographic origin. The zampogna is characteristic of Southern Italy and has at least two melodic reeds: one for the melody and the other for the accompanying notes. The bagpipe belongs to the culture of Northern Europe and has only one melodic reed.
Generally, the zampognari perform in pairs: one plays the zampogna and the other the plays the “ciaramella” (a wind instrument similar to the oboe but made of reeds).

The “zampogna” is considerated a variant of the flaute of Pan: the Greek god half man and half goat. The zampogna spreads through the Central and South Italy since ancient times: the “utriculus” (the instrument before it) was frequently played in the ancient Rome, at the court of the Emperor Nerone.
In the second half of the 1700s, the zampogna spread through Naples and became the musical instruments that accompanied the prayers of the lawyer-prelate Alfonso Maria de' Liguori. The prelate formed choirs formed by “lazzari” (young Neapolitans of the lower class): they sang through the alleys of the city and he taught them the Christian doctrine.
Alfonso Maria de 'Liguori is the author of the song "Quanno nascette Ninno", even before the composition of the famous Italian Christmas song "Tu scendi dalle stelle", still played by all zampognari.

The pastoral and the rural world 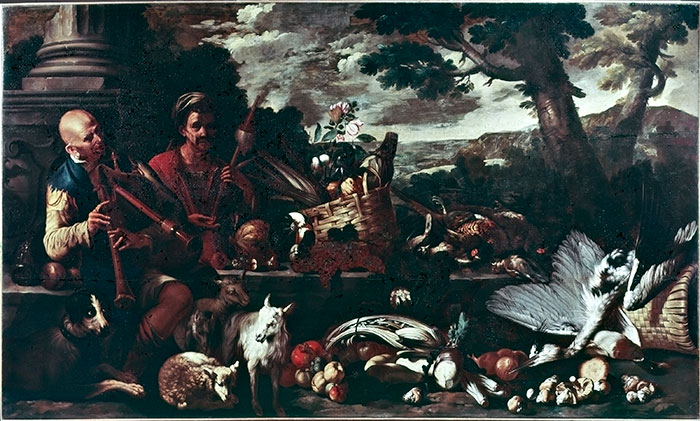 The zampognaro is also a figure belonging to the rural world and shepherds: often the shepherd played the zampogna during the transhumance; in the Christmas period, they moved to the city and played through the streets and also in the house. They wore traditional shepherd's clothes like: mutton jacket, cape, velvet hat and “zaricchie” (typical sandals).
Currently, in rural areas of many regions of the Central and South Italy, the zampognari play throughout the year during holidays, processions and events such as birth and wedding.

The zampognari in the Neapolitan nativity scene 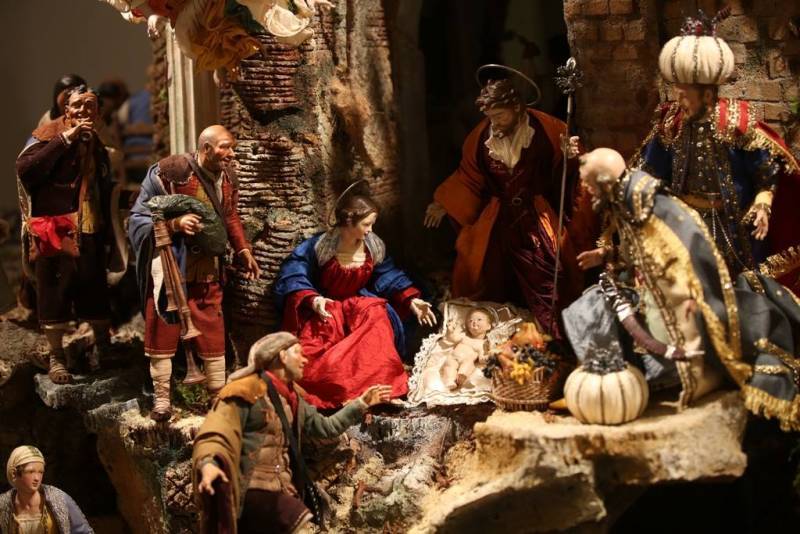 Among the regular characters in the Neapolitan nativity scene, there's always a couple of zampognari: this proof that the zampognaro is a fundamental figure of the Christmas Neapolitan tradition. They are positioned in front of the cave, to celebrate the birth of the Baby Jesus.

Although the zampognari are much less than in the past, they still today are wandering around the city of Naples, through the alleys of the historical centre and not only, drawing the attention of the citizens and tourists with a sweet melody, characterized by a veil of nostalgia too.