Nativity Scene: have you ever thought of making one?

Among all the Christmas traditions, the Nativity Scene is the one the Neapolitans are more fond of because it represents more than anything else the culture, the art and the tradition of the people of Naples. It is a family ritual that for several centuries combined religion and superstition, sacred and profane. In fact, the Nativity Scene has become a true form of art between the 17th and 18th centuries, but it has existed long before. The first documented evidence dates back to 1025.

To build a Nativity Scene is really easy. Just simple materials are needed, like cardboard, wood or cork, plus a wooden board to put everything on. These elements in Naples are extremely easy to find, especially during the Christmas period. In San Gregorio Armeno, the street where many of the most important crib artisan shops are gathered, you can find everything you need without spending a fortune. In addition to renowned craftsmen there are also shops where you can buy at a reasonable price.

Let's see now what are the basic elements to make a real Neapolitan Nativity Scene.

The core and heart of the whole representation is undoubtedly the hut where to place the nativity scene. Inside, on a carpet of moss, the Madonna and St. Joseph are placed with the ox and the donkey. In the middle there is a manger that must remain strictly empty until midnight on December 24th, when finally you can put Baby Jesus in it. Do not forget the comet star that goes on top of the hut, even better if flanked by two little angels. On 6 January, then, on the day of the Epiphany, you have to add the Three Kings. Generally two of them are represented standing and one kneeling. Do you want to go big? In the days before Epiphany you can put them far from the hut to simulate their journey, while they ride a horse, a dromedary and an elephant that symbolize Europe, Asia and Africa. If you don't have enough room at home, don't worry, you could even stop here, you already have your Nativity Scene. Those who want to unleash their fantasy have plenty of choice. Using your creativity is absolutely not forbidden, but there are many characters and settings that are typical of the Neapolitan tradition and that should not be missing. The first on the list is certainly Benino or Benito, a sleeping shepherd. Legend has it that the Nativity Scene is the result of his dreams, that's why nobody dares to wake him up and he is one of the most important characters. Cicci Bacco is a vintner who is often depicted sitting on a barrel driving a wagon. This is what remains of the ancient cult of the god Bacchus. The two friends, Zi 'Vicienzo and zi' Pascale, respectively represent Carnival and Death. According to the stories told in Naples, the skull of the latter would still be kept in the Fontanelle cemetery and you can ask him for advice on which numbers to play the lottery. The fisherman is another symbolic character, in fact in the early centuries of Christianity, when every depiction of the face of Jesus was forbidden, the fish became one of the symbols of Christ most recognizable for the people. Then there is also Stefania, a young woman to whom the angels forbade visiting baby Jesus because she was not married and had no children. She then took a stone, wrapped it in a cloth and pretended that it was her little son, thus deceiving the angels. When a miracle happened in the presence of the Madonna, the stone became a child that her mother called Stefano. That's why December 26 is celebrated as the day of Saint Stephen. These are some of the most famous characters of the Nativity Scene, but many others can be included. Generally they are common people, poor, like the gypsy or the harlot and then there are the twelve merchants. Each one of them represents a month of the year, based on the product they sell. 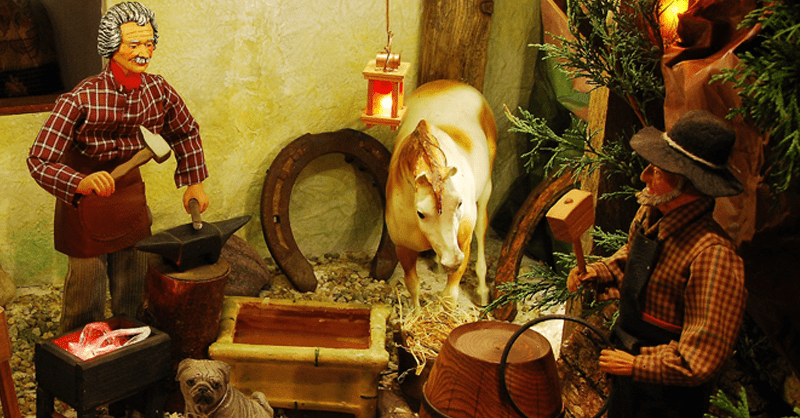 As for the settings, the most typical are the tavern that represents the dangers of the journey that St. Joseph and Holy Mary had to face. The well is instead an element of conjunction between the earthly world and the afterlife. According to ancient superstitions on Christmas Eve it was not permitted to draw water from the well because it was contaminated by evil spirits. The river with the bridge, is also a symbol of passage and connection between life and death. Here and there you can put sheeps, the nativity represents in fact the world of humble people, merchants and shepherds, and sheeps are the representation of simple souls led by Jesus. The final touch is a sheet of blue paper studded with stars to place against the wall. It's the background to the whole scene, representing a starry night. However, it should be kept in mind that the Nativity Scene is certainly made of ancient traditions, but also of heart and imagination. It is an opportunity to experience the atmosphere of Christmas with your family, so have fun building your own together with your loved ones.