For the lovers of contemporary art who are going to visit Naples there is a whole “underground” world to discover. The artistic project of the underground station in Naples represents one of the most interesting Italian experiments on the permanent insertion of contemporary artwork in a urban context. The first to be filled with colors, mosaics, installations, sculptures and photographs were the stations of Line 1: Museum – Dante – Salvator Rosa – Materdei – Cilea/Quattro Giornate – Vanvitelli – Rione Alto. Recently were builded Università, Toledo, Garibaldi and Municipio. The project also extended to Line 6 with the following stations: Lala – Mergellina – Augusto – Mostra. But…what is so special about the art underground stations of Naples?

Well, not all cities have such an important open-air museum at the price of a simple underground ticket. Not everywhere you can see real artistic masterpieces between staircases and docks. For the most distracted, so much art can simply represent a color note between forced paths, races and expectations. For the most minded, an opportunity for reflection and observation. Art loses its sacredness and can be found everywhere, not just in museums. This beautiful open-concept concept makes the Naples underground one of the most fascinating in the world and accompanies the spectator in his daily journey. In addition, in some areas of the city, the works of local and international artists have been the starting point for a significant upgrading of the surrounding area. Let’s go to the discovery of new art stations: Garibaldi, Municipio, Toledo and Università. 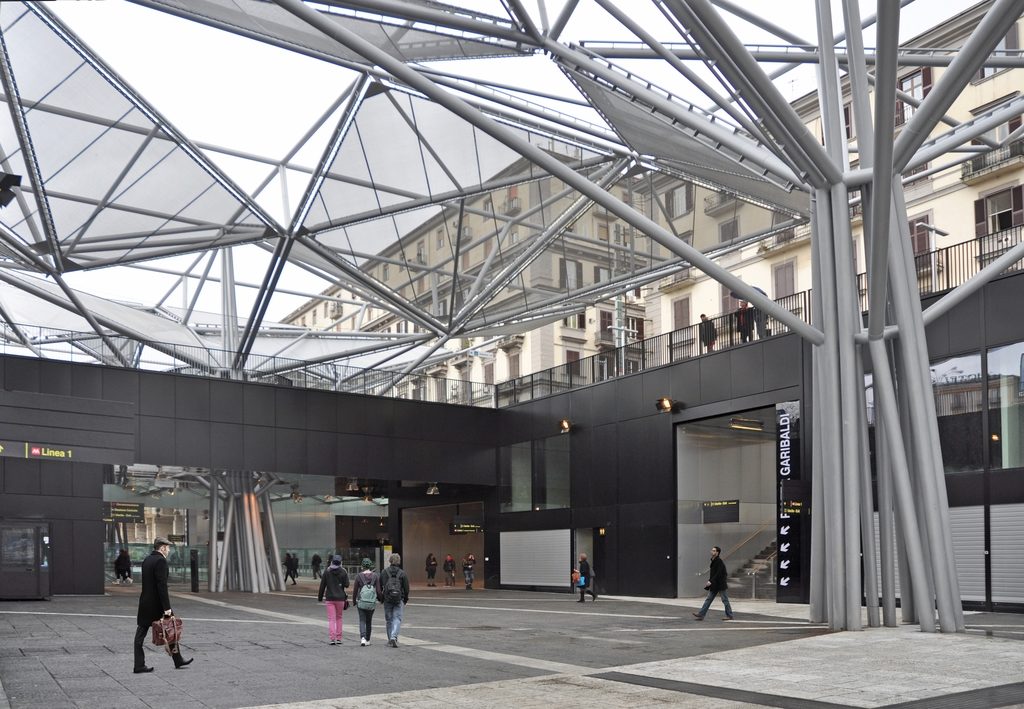 In Garibaldi station has been made an important redevelopment project, becoming a good business card for tourists arriving in the city by train. The exterior of the railway complex was occupied by a square covered by a metal and glass structure characterized by some shops and stairs leading to the docks. Once you have completed the long and “futuristic” path between the suspended escalators you will come across a mirrored wall with photographs of passengers, full-length, waiting or moving. These are the two installations by the italian artist Michelangelo Pistoletto, entitled Stazione.

The purpose is to make the “true” passengers interact with those “fake” embedded within the work. 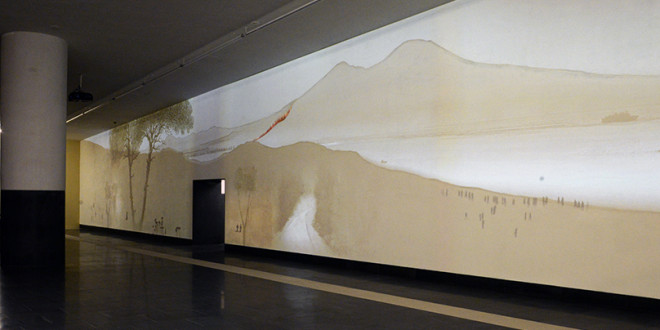 As Garibaldi station, the area surrounding Municipio station has been greatly upgraded. Not far from the underground entrance, in fact, there is a fountain dating back XVI century dedicated to god Neptune. The importance of the Municipio station is the position, indeed it is near the proximity of the city’s most important port (Molo Beverello), a place rich in archaeological evidence. During the work, remains of the old port of Neapolis and the have been found. Two portuguese architects have been involved in the project of this station: Àlvaro Siza and Eduardo Souto de Moura, who used lava stone, white plaster and the purity of the lines that characterize the interior of this station. The station is characterized also by the work Passaggi of the contemporary artist Michal Rovner, a video installation showing pictures of the city of Naples, but also Jerusalem and Paris interrupted by human figures in the distance. 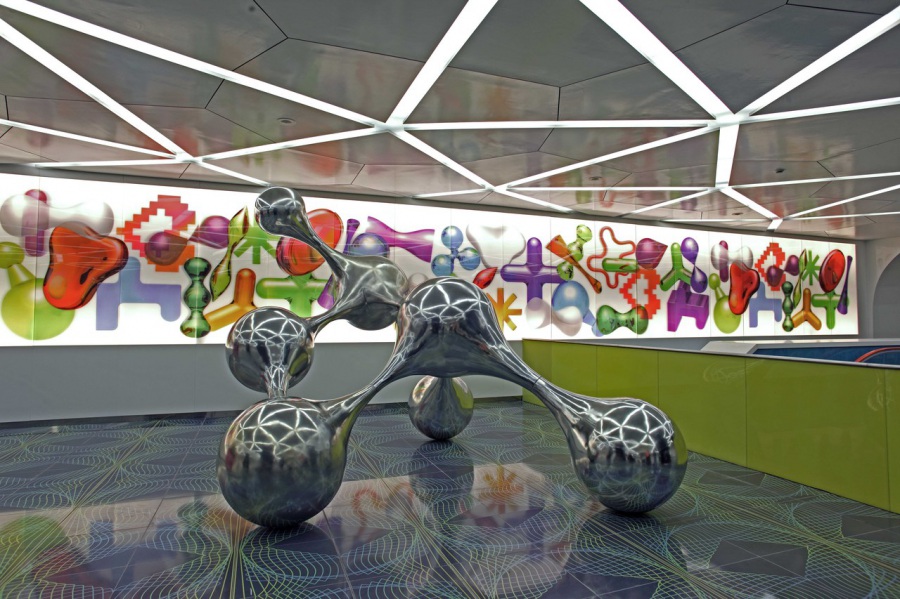 The University Station is only six years old. Designed by architects Karim Rashid and Alessandro Mendini in 2011, is one of the most colourful. The walls leading to the docks show strong fuchsia and lime colours, and in the middle of the light box entrance there is a hall square, steel sculptures and black pillars remind means the communication between humans and synapses between brain neurons. Works like Synapsis, Ikon, Conversation profiles want to emphasize the importance of communication in the past as in the present time. This particular aspect is underlined by the images of Dante Alighieri and Beatrice Portinari, the greatest exponent of Italian poetry and his muse. The Toledo station  has been considered the most beautiful station in Europe by CNN and the Daily Telegraph daily newspaper. It was completed  recently (2012), and was designed by the spanish architect Oscar Tusquets Blanca. The most impressive work of this station is Crater de luz, by Robert Wilson, which connects the inside with the outside and remembers the sea in its many facets, as well as the wavy walls surrounding it. The brightness and colors that fill the space with different shades of blue fascinate thousands of passengers every year. The same artist is a digital installation that replicates the sea waves for a surface of 24 meters and covers the walls of the corridor leading to the dock, By the sea .. you and me is the title of the work. Inside the station everything remembers the recent history of Naples. On the first floor you can admire the remains of  the Aragonese walls that cradled the area in medieval times, but in the atrium you can find two events related to the Parthenon people depicted in two beautiful and colorful mosaics: a procession guided by St. Gennaro the patron saint of the city And a scene that recalls the works for the construction of the subway (“Central Railway for the City of Naples”, 1906; “Reclamation of the Lower Naples Districts in Relation to Metropolitan Railroad”, 1884).

The Naples Pass: a card for Naples metro and public transport

During your trip you will need to use public transport and you will definitely visit the main attractions of Naples. A smart way for tourists to do both is to buy the Naples Pass.
The Naples Pass is a card for metro and public transport in Naples, but also museums: thanks to its partnership with Campania Artecard, Naples Pass can offer you a season ticket for Naples public transport along with discounts and reductions in the main museums and attractions of Naples, but also in many restaurants, pizzerias and partner activities.
The Naples Pass can be purchased before departure and activated once you arrive in Naples. Many tourists, in fact, buy it during the planning of their trip to Naples.
Seguici sulla nostra
pagina Facebook