Piazza del Plebiscito: history and beauty of a historic square in Naples

Piazza del Plebiscito: one of the symbolic spots of Naples

Piazza del Plebiscito is the most important square of the city, full of history and art. It is closed to the historic city centre and the Lungomare Caracciolo. It sets at the end of Via Toledo and is large 25thousand square meters. It is the largest square in Naples and one of the largest in Italy.

Where now there is Piazza del Plebiscito, in 1543, there was a vast open space wanted by Don Pedro de Toledo to build a viceregal palace. Only with the construction of the Royal Palace, the project for the square started and was designed by Domenico Fontana.

For many years, because of the open space of the royal palace, the name of the square was Largo di Palazzo. It took the current name in 1860, in honour of the plebiscite had for the union of the Kingdom of the Two Sicilies with the Savoy's Piedmont and the rest of Italy.

On the Royal Palace's wall, some statues tell the story of the square and city. Different artists made them; they represent all kings of Naples: from Ruggiero II, known as the Norman, to Vittorio Emanuele II.

For the new Serino's aqueduct opening in 1885, they built a fountain in the square. After its removal, it returned to the piazza in 1985 for celebrating a century of the aqueduct. And, after this event, the fountain disappeared again.

In 1963, the square became a big public car parking, because of the strong increase of cars in the city during the economic boom's years. It goes on till 1994 when during the G7, the city's government decided to close the square to the traffic and make it completely car-free.

What visit and see in Piazza del Plebiscito

In Piazza del Plebiscito, there are significant statues and palazzi.

At the end of the square, there is the Basilica di San Francesco di Paola. It is a minor basilica of Naples, considered one of the most important examples of Italian Neoclassical architecture. It was built in the 19th century by order Ferdinand I of the Two Sicilies, after Joachim Murat's banishment by the city. Its colonnade takes inspiration from San Pietro in Rome, while the Basilica's shape is similar to the Pantheon. On its back, there is Pizzofalcone's hill, where, according to the tradition, was born the first population of the ancient Parthenope.

In front of the Basilica, isolated from each other, there are the two equestrian statues of Charles III of Bourbon (the first one of Boubon's dynasty) and his son Ferdinand I. They ordered the sculptures to celebrate the return of the Bourbon's dynasty after Napoleon's power. Antonio Canova fully made Charles III's statue, but he couldn't finish that one of Ferdinand I because he died. So, it said that Canova built the horse, while his student Antonio Calì made the king.

In front of the Basilica di San Francesco di Paola, there is the Royal Palace. It is one of the most important art's spots of the city. It was one of the four Bourbon houses during the Kingdom of the Two Sicilies. A part of the Royal Palace houses the National Library of Naples.

In Piazza del Plebisicito, there is also Palazzo Della Prefettura, also known as Palazzo Della Foresteria. It is the house of the namesake institutional body that rules the province. The palazzo was build in the 19th century on the ruins of an ex Dominican monastery.

In front of Pallazzo Della Prefettura, there is Palazzo Salerno. Today, it is the house of the military offices of Comando Forza Difesa Interregionale Sud. The palazzo was built at the end of the 18th century and was before general Acton's house and then the house of Bourbon Cabinet ministers. The name comes from one child of Ferdinand IV, who was the prince of Salerno.

Not so far from Piazza del Plebiscito, there are other important monuments of Naples, like the next San Carlo Theatre, Galleria Umberto I and the Maschio Angioino castle. Moreover, the square is visible on the top of the San Martino hill in Vomero, where San Martino's Certosa and Castel Sant'Elmo rise.

There is a funny story about the statues of the Kings of Naples that stay on the wall of Royal Place. Charles of Hapsburg asks who wees right there, Charles III answers that he doesn't know, while Joachim Murat admits being guilty; that's why Victor Emmanuel II keeps the peace threatening to avoid him.

About Piazza del Plebiscito, it is famous the game of the crossing it blindfolded or with closed eyes. Starting from the Royal Palace's entry, which is just in the centre between the two equestrian statues, you have to walk for about 170 meters in a straight line passing through the middle, but practically no one achieves the feat. In origin, the square-shaped was irregular and still today, there is a slight slope that impedes who crosses the square to go straight.

According to the legend, Queen Margherita used to grant salvation to only the prisoners who had passed this hard test, but no one was ever able because of the curse launched by the same queen. This curse, still today, doesn't permit to do it.

How to get to Piazza del Plebiscito

Piazza del Plebiscito is in the heart of the historic city centre of Naples. It is at the end of Via Toledo, one of the most famous shopping streets, and after Piazza Trieste e Trento and Lungomare.

Reaching the square is very simple, but it is recommendable to do it by public transports. 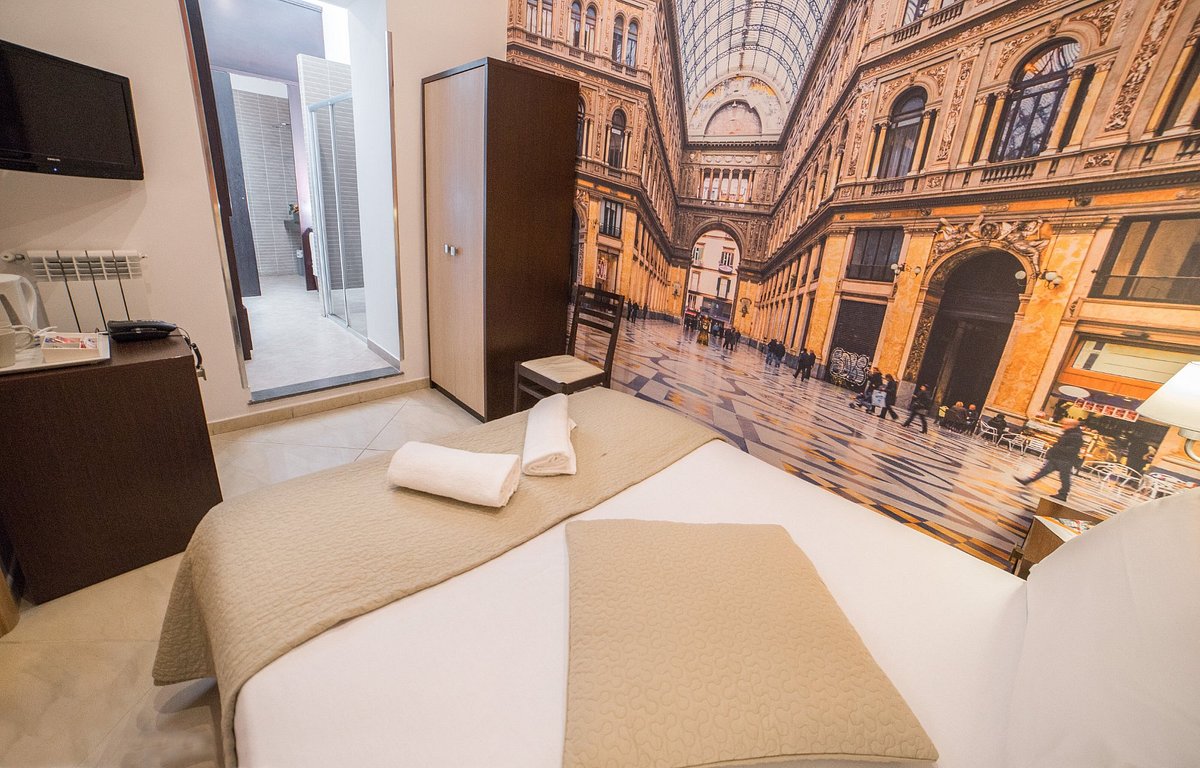 Not far by Piazza del Plebiscito, in a good location for visiting the city, there is the Guest House Chiaia 32 Naples. It is a residence located in a renovated palace in the heart of Naples.  Its rooms are comfortable, well furnished with all comforts.

It is situated directly on the famous Via Chiaia, one of the most 'ancient and famous in Naples, pedestrian area and reference point for shopping Neapolitan. It is close to the most famous tourist spots in Naples.

Its rooms are completely furnished and, if you want, there is also the formula studio with kitchen.