As is well known, the Capital of Culture 2022 is the smallest (and perhaps the most characteristic) of the islands of the Gulf of Naples: the beautiful Procida, where preparations are underway for this full of initiatives year, with the hope that soon the restrictions related to the pandemic will become only a distant memory. So let's go and discover the first celebrations and ideas paying homage to Procida.

Opening ceremony to celebrate Procida as capital of culture January 22 is the key date for the start of all activities related to the implementation of the Capital of Culture 2022 project, even though right the opening ceremony in attendance has been postponed to spring, hoping for a better situation related to covid contagions. The mayor of Procida, Dino Ambrosino, said "Our goal is to organize an opening ceremony involving the whole community, especially young people, teens and children. We will be able to work calmly only after the confirmation that the variant currently most widespread is less dangerous."

Cultural projects and 150 events in Procida, capital of culture 2022 Procida is officially the Italian Capital of Culture 2022, and this has long been a known fact: the proclamation ceremony was in fact held one year ago in the presence of Minister Dario Franceschini, but because of the difficult situation due to the covid, for the important award ceremony web-streaming was preferred. The recognition has arrived because the project presented by the island has routed all the others, with its 44 cultural projects and 150 events around 330 days. 1 million euros is the budget allocated to Procida by the Ministry of Culture. The aim is to redevelop, restructure, include, according to what was the slogan chosen for this year: "Culture does not isolate". At the center of the redevelopment project is Palazzo d'Avalos, the sixteenth-century building used as a prison until the 1980s.

Monuments in pink to celebrate Procida On the night of January 22nd many monuments in Campania were illuminated with a beautiful pink light, as a tribute to the Italian Capital of Culture 2022. This particular "look" was achieved thanks to several collaborations including the Campania Region, the Campania dei Festival Foundation, the City of Procida and, of course, the municipalities where the various cultural sites are located. Among the monuments of this romantic initiative we certainly mention the Royal Palace, Piazza Plebiscito and Castel Sant'Elmo in the Neapolitan capital, the Arch of Trajan in Benevento, the Royal Palace of Caserta, the Temples of Paestum. Obviously pink has been chosen as the thematic color assigned to the island.

A stamp for Procida 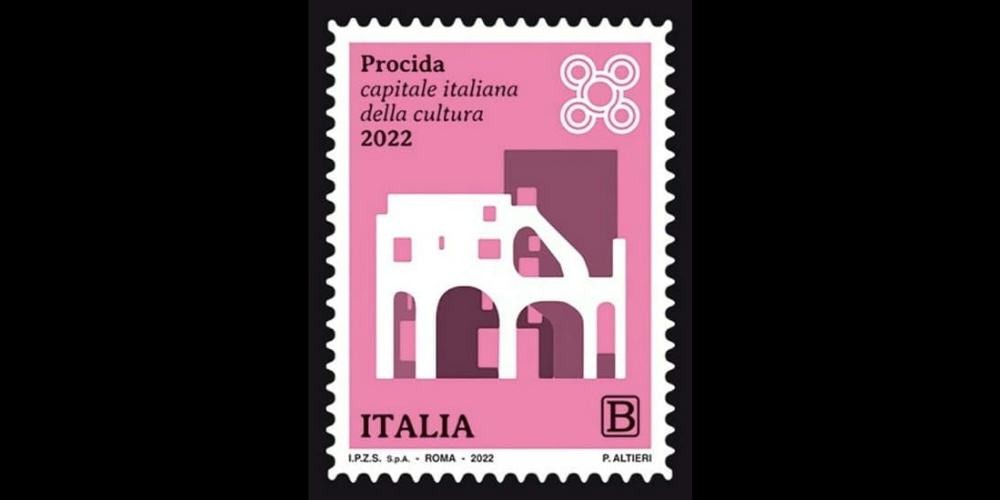 The first stamp issued this year is dedicated to Procida, so the color chosen is still pink and it bears the signature of the designer Paolo Altieri. The sense of the image is the postcard profile made up of the recognizable silhouette of the island with its pastel shaded fishermen's houses, and that so typical and attractive image of the small port that tourists use to see at the moment of disembarkation. The date on which it was issued is January 22 again, the so-called philatelic new year.

A guide to current events in Procida The newspaper Repubblica decided to celebrate the marvelous island with the volume “Procida '22, Italian Capital of Culture", in homage with the newspaper on January 27. The volume, enriched by the photographs of Riccardo Siano, has 240 pages and inside of it you can find a sort of guide to the events taking place, with more stories by important writers. A valuable and fascinating guide, therefore, both for connoisseurs and fans of the island, and for those willing to deepen the history and cultural aspects of this little pearl of the Mediterranean. The presentation of the volume was held at the MANN, the National Archaeological Museum of Naples, in the presence of the director Paolo Giulierini and the new Naples mayor Gaetano Manfredi. Given the great success of the manual, the newspaper announced that, for its subscribers, a digital version of the guide is also available. 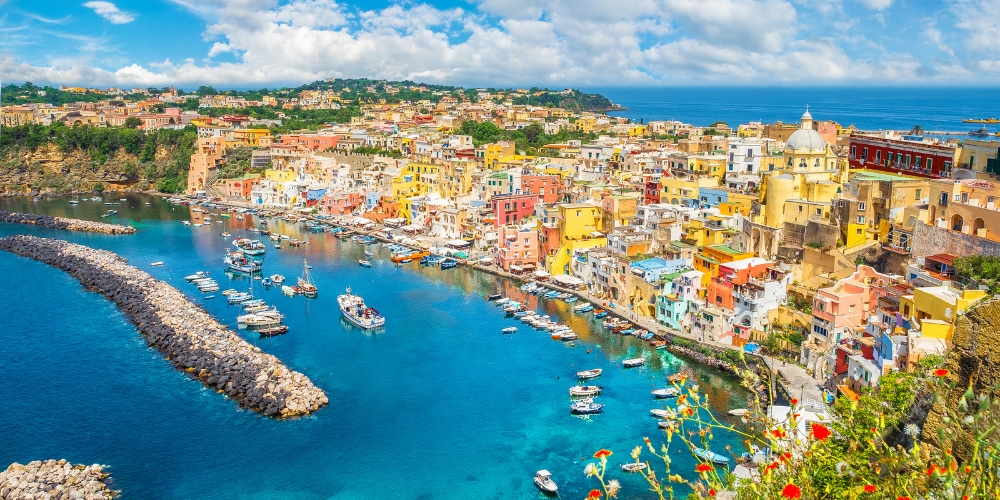 Finally has been the official inauguration for Procida Capital of Culture 2022: Saturday, April 9, in fact, with great celebration, the start of the initiatives that will last throughout the year was given. The ceremony was held in the presence of Sergio Mattarella, our President of the Republic. The inauguration was divided into several "stages": at 2pm everything started at Calata Porta di Massa with musical accompaniment by pianist Roberta Benvegnù. The celebrations then went on through the island with 5 shows, whose main topic was "the Myths of the Sea", with the work of more than 200 performers. The institutional part of the ceremony was instead held in the former convent of Santa Margherita Nuova in Terra Murata and saw the participation, in addition to the aforementioned Mattarella, of the mayor of Procida Dino Ambrosino, the director of Procida 2022 Agostino Riitano, Dario Franceschini and Vincenzo De Luca. The super cultural program just begun includes 44 projects and 150 events, to be realized in about 300 days and with the participation of 350 artists. Great initiatives then, for which there is really a lot of expectation.