Sacred and profane: visit to the Basilica of Pietrasanta

Millennia of Neapolitan history in the city center

In Via Tribunali, in the historic center, there is the church complex of St. Maria Maggiore of Pietrasanta. One of the most interesting spot of Naples because of its history and art. It was the first church of the city dedicated to the Virgin Mary.

In Pietrasanta Church there is a stratification, not only architectonic, but cultural too. It tells history, legends and traditions of the past and the present of Naples.

The building was built in the 6th century as a paleochristian basilica on the ruins of the temple for Diana. The current church was erected between 1653 and 1678 on the design of Cosimo Fanzano that rebuilt it in Barocco style.

In 1803 the complex was used as firehouse. The bombing of the Second World War severely affected the religious building and its restoration was completed in 1976. The church remained closed for decades; today it has been reopened and it's visitable, but functions as an auditorium.

It was called "della Pietrasanta" because inside there was a stone that when you kissed, it gave you the indulgence. According to tradition, Pope Evarisco was buried there.

The cult of Diana: the Janara in Neapolitan legends 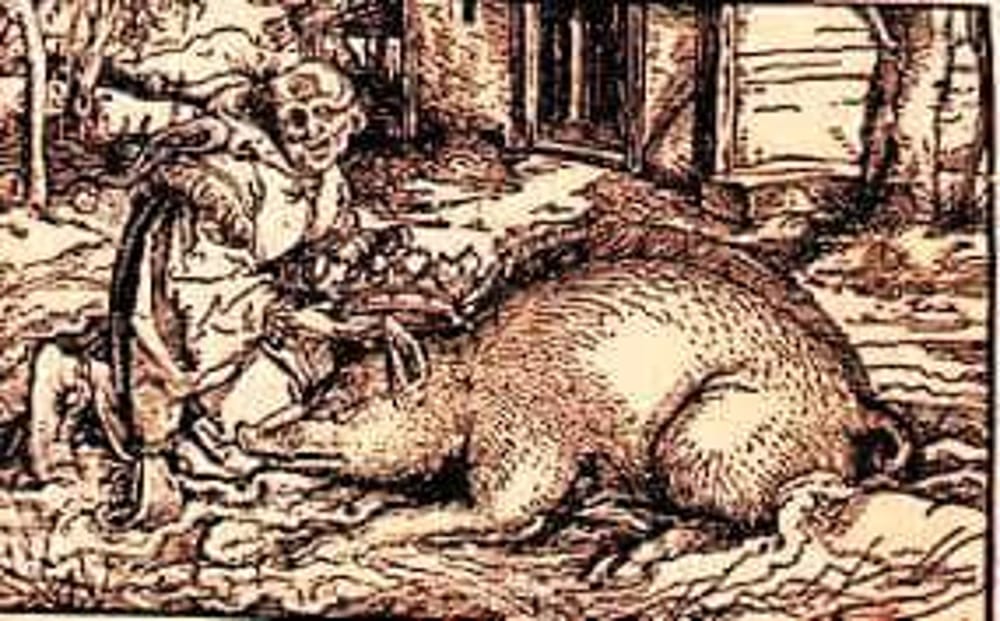 Where now there is the church, once the goddess Diana was venerated. The access to the Temple was exclusively for women, who invoked the goddess to not experience painful births. The goddess was the protectress of women, wild animals, hunting and the keeper of verginity. The men weren't big supporters of her Cult because many women, to avoid unhappy marriages, preferred to commit themselves to the Goddess and offer her their chastity. Her priestesses were called in a negative way Dianare or Janare. During the Paleochristian era, evary woman that invoked the goddess used to be accused of witchcraft: they were marked as servants of the Davil and banished from the city.

Probably from this derives the legend of the Devil Pig, to which the construction of Basilica della Pietrasanta is linked. According to this legend, the Bishop Pomponio decided to build the church after the Virgin Mary appearance in his dreams. She asked him to build a santuario for her. The Madonna explained to him that the Basilica would fight the devil that, in the form of a pig, used to appear every night in the area between Piazza Miraglia and the historic center, scaring people with its devilish grunt.

According to the inhabitants of the place, this evil presence was linked to the temple's ruins of Diana, where some women (considered witches) used to devote themselves to pagan rituals and in this way enpowered the Goddess towards her vengeance, by delivering the horrible pig to the city. With the building of the Basilica di Santa Maria Maggiore di Pietrasanta, this scary animal disappeared forever.

Visit the Basilica of S. Maria Maggiore in Pietrasanta 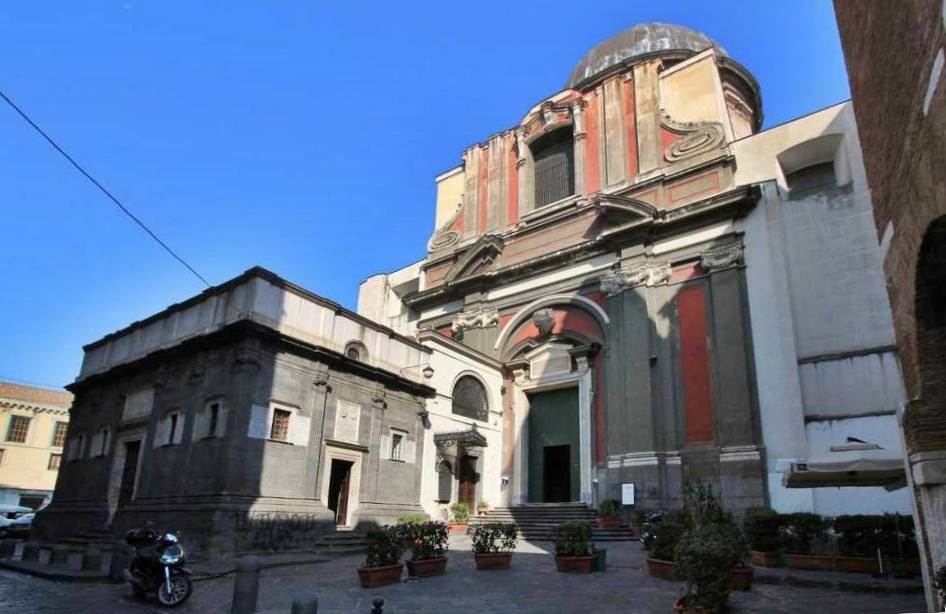 Santa Maria Maggiore di Pietrasanta Church lets you do a sort of "time travel". The visit is a walk through the centuries: several architectural elements overlapped throughout thousand years of historory.

The legend of the Griffon: the bell tower of the basilica 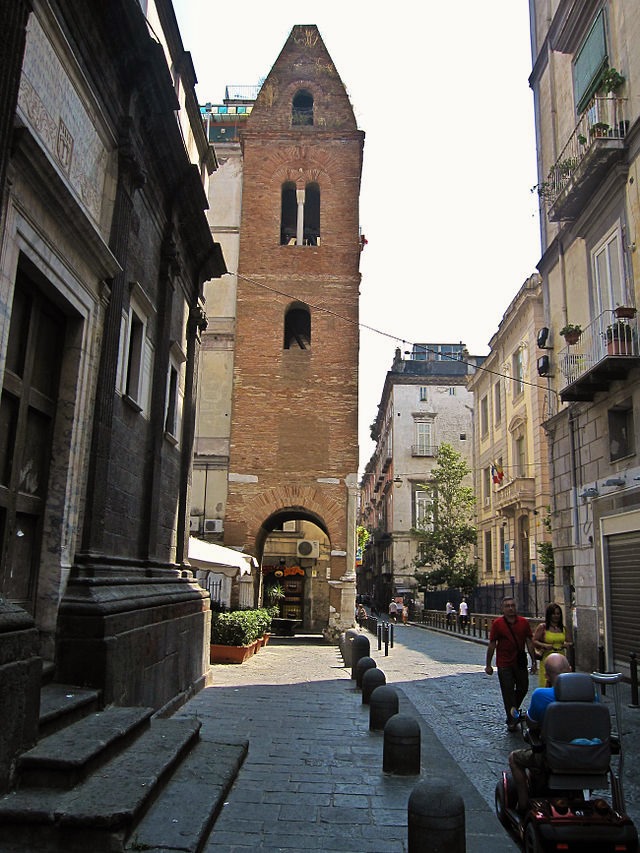 In Piazzetta Pietrasanta stands the bell-tower in bricks of the old Basilca, traditional Roman work with Byzantine influences. Of square plan, on four levels, it was built entirely of bricks. Inside the body wall presents ancient materials. Michelangelo Schipa and Benedetto Croce believed the bell-tower was contemporaneous with the church, but the study of Venditti moves its construction to the 9th-10th centuty.

Presumably, the bell-tower was the access point to Neapolis, the old city of Neaples. Visiting the bell-tower is like stepping back in time, because every piece is a part of Neaples' history.

The bell-tower is surrounded by griffon's marble heads. The Griffon is a fantastic animal, well-known since ancient times, half lion and half eagle. According to the beliefs, it possessed supernatural powers. It's numbered with the animals of classical mythology.

The griffon has very precise and defined features: it has body, hind legs and tail of a lion, and head and claw (as front legs) of a eagle. The animal represents the conflictual symbol of two natures: human and divine.

La Locanda del Grifo: where to eat and have a break 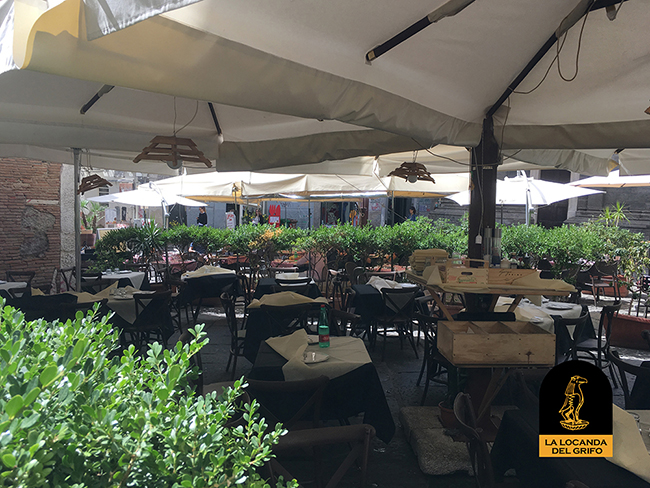 When visiting this area and in need of a break, we recommend La Locanda del Grifo, a restaurant and pizzeria where you can enjoy genuine, seasonal food: one of the essential features is the use of a modern ecological gas oven. The owner, Mariano Ferrara, combines his culinary skills with kindness and courtesy to offer excellent customer service.

In the restaurant, you can eat excellent pizza or a menu of meat and fish. Only locally sourced ingredients are used and it is also possible to eat outside. It is very pleasant to stop in the restaurant during a visit tin the historic center. 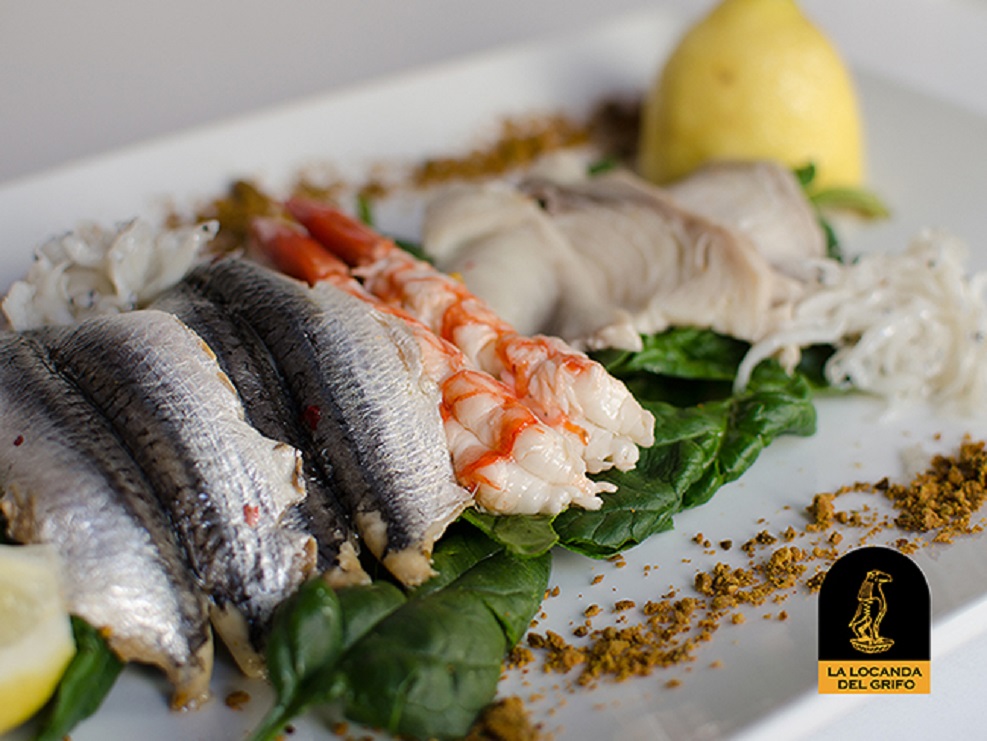 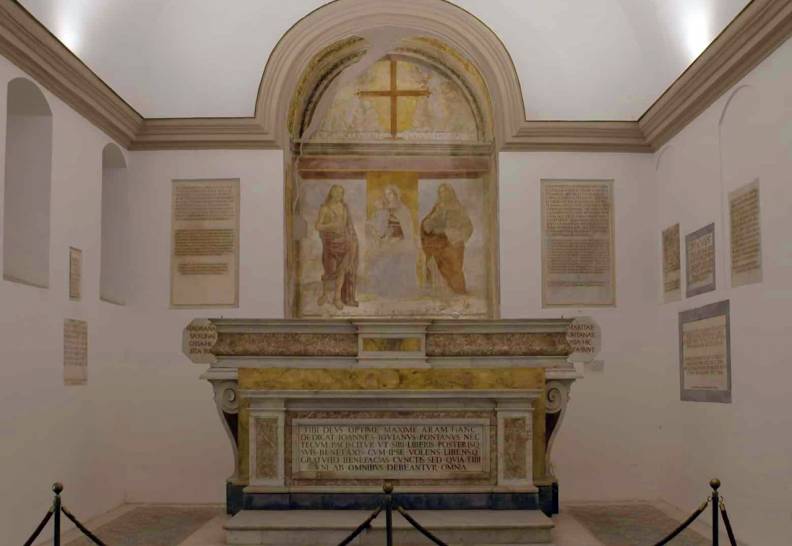 The cappella was built in 1492 by Giovanni Gioviano Pontano. Overlooking Piazzetta Pietrasanta and Via Tribunali, it's completely covered in grey piperno stone.

Pontano was a brilliant humanist. He erected the cappella as tomb of his beloved wife Adriana Sassone. Inside, accompanied by elegant Latin inscriptions written by himself, were buried his children and his friend Pietro Golino too. It's rectangular, with three extetior facedes, while the fourth is adjacent  to Cappella Cappuccino. In the square it stands out for its elegant and charming extruded details. 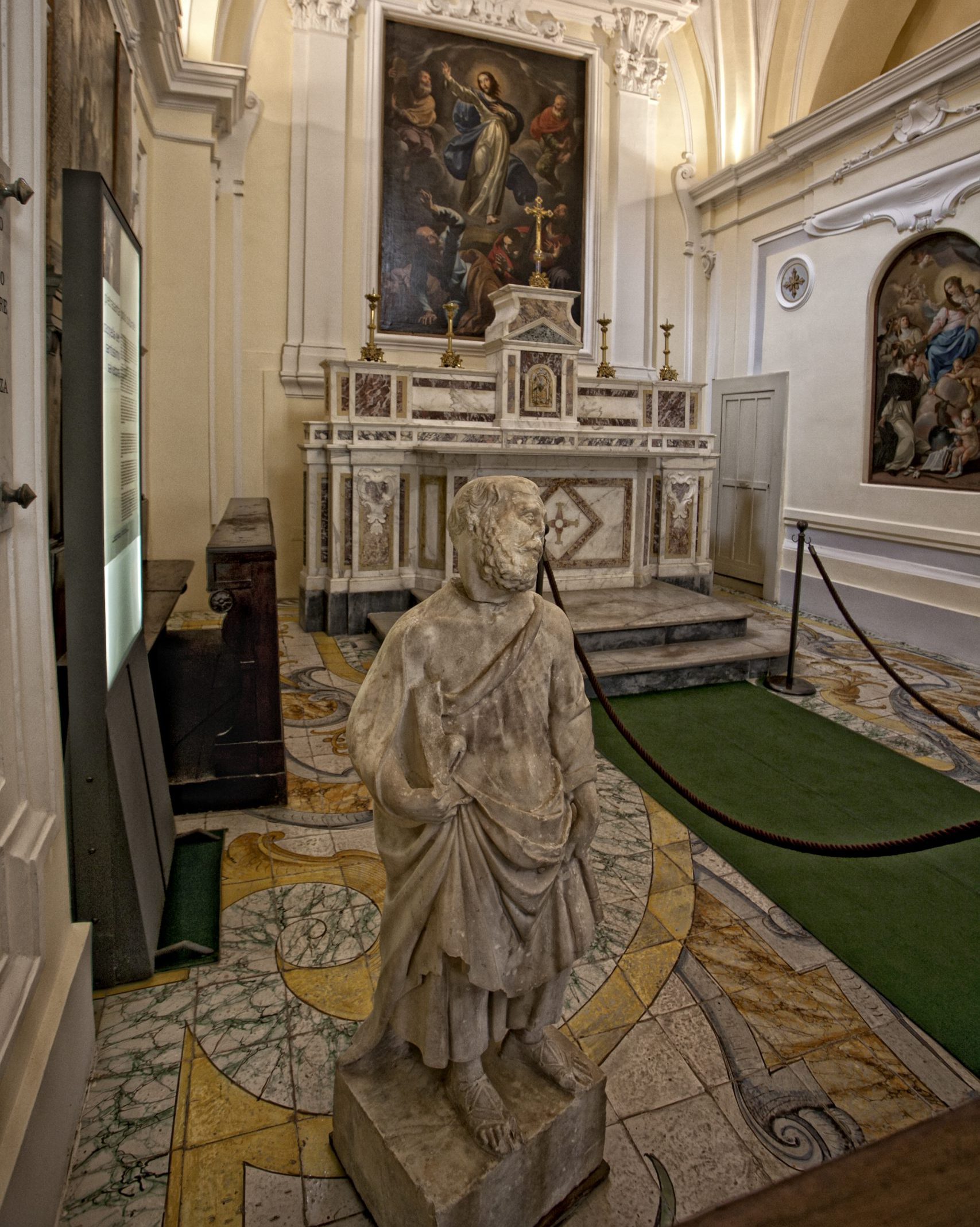 Between the Basilica and Cappella Pontano, there is Cappella SS. Salvatore, dated to 1150. This church of the Capuchin Archconfraternity was born as an autonomous Church. Altered during the 18th century, inside it was embellished by a maiolica floor, valuable decorations and the altar in polychrome marble. Through the piperno portal you can go outside, where on the right you will see a pseudo niche, surmounted by a plaque dedicated to the reconstuction of St. Maria Maggiore dome in 1820.

The basement of the basilica: the crypt 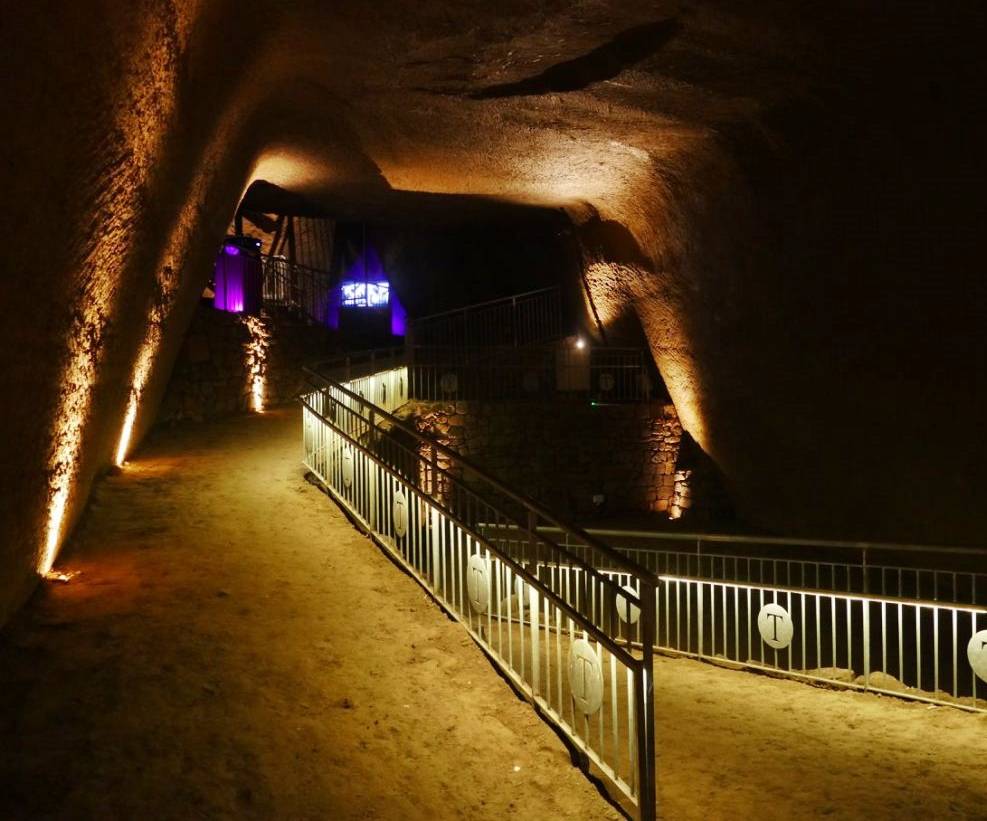 The underground of St. Maria Maggiore Church represents a precious testimony of the Naples' history. In the crypt there are the ruins of the ancient Paleochristian basilica and some pieces of an ancient mosaic of Roman age are conserved.

The church's dungeon is a real underground path, almost a kilometre long, where there is much to see. Indeed, you can admire part of the Ancient Neapolis' Greek-Roman aqueduct, and then much more as the Cistern of the Wells, Tuff Archive and the Prince's Pool. A path between historical periods and characters that are part of the history of Neaples.