The archipelago of Campania: Ischia, Procida, Capri, Nisida and Vivara

A tour around the Islands of Campania

Campania is not only famous in the world for the city of Naples. There are other attractions that make this region a very popular tourist destination. One of the reasons that drives tourists to visit Campania and the city of Naples is the presence of some unique islands in the world: the islands of Capri, Ischia and Procida. The three are the most famous and well known, but they are not the only ones. There are other islets that are less known but worth mentioning.

The island of Capri and its Faraglioni 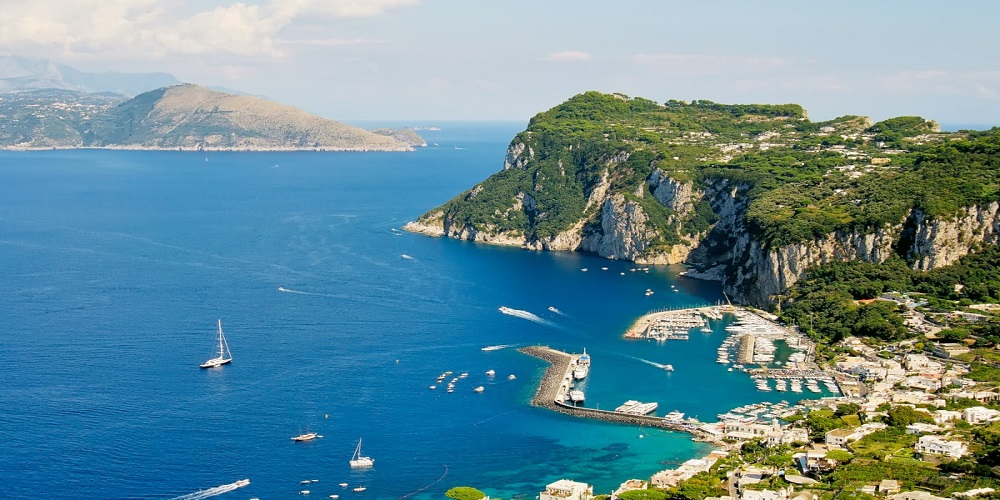 Capri is one of the islands that make up the Campania archipelago. It is not the largest, the primacy belongs to Ischia, but it is undoubtedly the most important. Although it is not the largest island of the archipelago, it remains one of the largest in Italy, is in fact ranked twenty-first in the ranking of the islands of the Italian peninsula in terms of size. Known throughout the world as one of the most beautiful and luxurious places to spend your summer holidays. The subject and set design of numerous film sets, Capri has hosted, and still hosts, the best actors and directors, both Italian and foreign, for the making of their films. Among films, TV series and video clips, Capri is a floating mini Hollywood. In the 50s' the island became the place of the summer "turtleneck" and attracted characters from the world jet set. Among them, Jacqueline Kennedy who imposed her style by introducing the fashion of walking barefoot.

The island, unlike Procida and Ischia, is of karstic origin. The reason is simple: at one time the island was part of the Sorrento peninsula, but it was later submerged by the sea and detached from the mainland, where today the Strait of Bocca Piccola is located. The morphological structure of the island is very particular: it has peaks of medium height and internal plateaus, the main one is that of Anacapri.

The coast of the island is very jagged and has many coves and caves, perfectly visitable, which are hidden among the cliffs. The most famous and well known cave is certainly the blue cave. It is a dark and dark cave whose water is tinged with a bright blue thanks to the sunlight that filters from the underground cavities.

When you visit Capri you can't help but take a boat ride to bathe next to the cliffs. There are three rocky islets that rise up in height. They are one of the characteristic features of the island that distinguishes it in the world, so much so as to recognize their names: Faraglione di terra (or Saetta) for the one attached to the mainland, Faraglione di Mezzo (or Stella) for the one between the other two and Faraglione di Fuori (or Scopolo) for the one further away from the island.

A characteristic feature of Capri is the funicular ride from the inlet of Marina Grande to the village of Capri. Piazzetta Capri is without doubt one of the most famous places on the entire planet. A living room austere the stars collected by the cafes frequented by the elite.

To get to Capri you must first pass through the ports of Naples or Sorrento and, from Easter to October, also through Castellamare di Stabia, Amalfi, Positano, Seiano or Salerno. From Naples the average sailing time is 80 minutes by ferry and 50 minutes by hydrofoil or fast boat.

Ischia, the largest island of the Campanian Archipelago 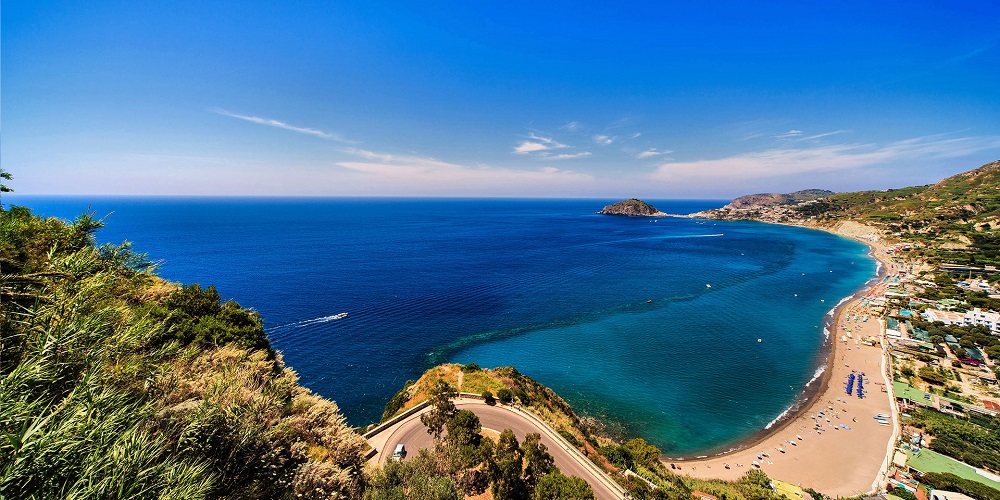 The Campano archipelago, also called Neapolitan, consists of five islands located on the edge of the Gulf of Naples, in the Tyrrhenian Sea. One of these islands is Ischia, the largest of the entire archipelago.

Ischia is located at the northern end of the Gulf of Naples, about 18 nautical miles from Naples. It is about 10 km wide from east to west and 7 km from north to south, and has a coastline of 43 km. With its 70,043 inhabitants it is the third most populous island on the Italian peninsula after Sicily and Sardinia. In ancient times it was also known as Pithekoussai or Pithecusae (in Greek Πιθηκοῦσσαι).

Together with the island of Capri, Ischia is one of the most popular destinations for tourists during the summer. Visited also in winter, from May to September Ischia is literally assaulted by Italian and foreign tourists, so much so that it reaches a number equal to 5 times the number of residents on the island itself. During the summer it is not difficult to come across famous people, such as actors, footballers or show business people who crowd the shopping street in Corso Vittoria Colonna in Ischia Porto, the quiet village of Sant'Angelo or the elegant boutiques surrounding Piazza S. Restituta in Lacco Ameno.

One of the main features of Ischia is the presence of a volcano not volcano. In fact, on the island there is a relief, Mount Epomeo, which represents the highest peak of Ischia (788 meters). The latter is a tectonic volcano or better said Horst, that is a block of earth's crust raised due to a magmatic thrust. Erroneously one thinks of Mount Epomeo as a volcano, although it has no volcanic characteristics.

One of the reasons that pushes tourists to visit the island of Ischia is the presence of an immense naturalistic heritage. Ischia in fact has 29 basins, hundreds of natural springs of thermal water and fumaroles. The territory of volcanic nature offers, in fact, many thermal parks among the most beautiful in Italy, where you can spend a day in total relaxation among natural saunas, whirlpools, mud baths and beauty treatments.

The island of Procida and its colourful houses Procida is the third island of the Campania archipelago. Unlike Capri and Ischia, Procida is the quietest and smallest of the islands, its coastline of about 16 km is very jagged, alternating low and sandy areas with other rocky and sheer cliffs in the sea. Procida has about 10,434 inhabitants and part of the metropolitan city of Naples. The island of Procida, together with that of Vivara, are part of the group of the so-called Felgree islands. On the basis of some archaeological findings it can be estimated that the island was already inhabited.

The geological studies carried out on the territory of Procida recognize the island's volcanic origin and probably the island was born from the eruption of four volcanoes, part of the Phlegrean fields, about 55,000 to 17,000 years ago, now completely extinct and largely submerged.

Procida is located at a distance of 3.4 km from the mainland and is connected to the island of Vivara by a small bridge.

Just Corricella is one of the most beautiful areas to visit for tourists. It is a fishing village that is characterized by the presence of numerous small houses with colorful colors. In this area, among other things, was shot the film "Il postino" by Massimo Troisi, the last film shot by the Neapolitan actor before he died. You can also find the shopping area full of craft shops, souvenir shops and excellent restaurants where you can taste fresh fish. 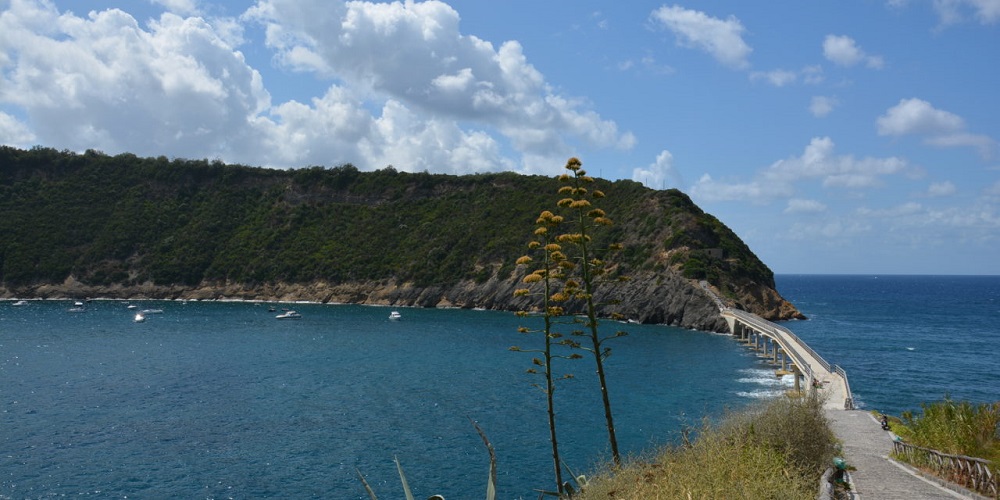 A few kilometers from the coast of the city of Naples there is a small island with a very particular shape reminiscent of a half moon or a dolphin, it is the island of Vivara. Vivara is an island that is part of the group of the Phlegrean islands. It is located between Procida and Ischia, much closer to the first because once Vivara and Procida were one, then later they separated. The two islands are still connected today but not naturally. Man has built a bridge that connects the two islands. We are talking about a bridge that cannot be crossed by vehicles but only on foot. The bridge also has a specific function: to transport the water pipeline that supplies Ischia.

Once Vivara was inhabited by the Mycenaeans, like Procida. Now it has been transformed into a beautiful state nature reserve where you can find many species of birds, especially in spring. Nightingales, redstart nuns, nuns, canapes, reed warblers and reed warblers spend these months between Procida and Vivara, making this place one of the main outposts of ornithological migration.

Today the island is uninhabited but can be visited to study or simply admire the flora and fauna of the place. There are some passable paths characterized by an uncontaminated vegetation. The visit is often made with the help of an authorized nature guide and lasts about 1 hour and 30 minutes.

The islet of Nisida

Nisida is a very small island belonging to the group of Phlegrean islands that make up the Campania archipelago. Nisida is located at the end of the hill of Posillipo, on the seafront of Coroglio, although from an administrative point of view it belongs to Bagnoli. The island can be seen very clearly from the promenade of Bagnoli or from one of the many terraces of the Virgilian Park, which faces exactly opposite the islet.

Today Nisida cannot be visited because it houses the juvenile prison of Naples. The small port of Nisida was used by NATO until its transfer.

Nisida is an island of volcanic origin, and corresponds to what is called maar, a crater partially filled by water.