The extinct Volcano of Roccamonfina: the legend of a charmed place

In the crater of an extinct volcano on the slopes of Monte Santa Croce, we discover a small, ancient village, where myth becomes history and envelops every passer-by in an atmosphere that leaves its mark.

History of the municipality of Roccamonfina

Roccamonfina is a small town in the province of Caserta. It has always been a fertile and generous land and has been inhabited by man since ancient times. It was the Romans, however, who made the charm of its grounds shine.

For centuries it has been a refuge for those who love to be pampered by the scent of woods, the taste of earth's products and thermal waters.

It was undoubtedly a refuge for the Roman Emperor "Filippo l'Arabo" and his family.

Legend has it that the emperor found shelter in these mountains to escape the fury of Decio, who usurped his throne. A ruthless and power-hungry warrior, he was willing to do anything to become emperor, so much so that he killed Filippo.

Unfortunately, he did not reckon with an even greater force: Love.

Love: Decio's deep and much-hindered feeling for the beautiful princess Fina, niece of Filippo l'Arabo, who, it is said, found refuge in Roccamonfina.

According to legend, the village was founded by Decius, who arrived here searching for his princess. For her, he had a fortress built in her honour, from which the village took its name.

Scholars give more credit to the hypothesis that the name is linked to ancient pagan cults, but the charm of this story and the remains we see today makes us think that the extraordinary nature of these places is in line with that of the noble Fina.

We let the princess guide us to the place that saved her from the terrible Decius, what is called "L'Orto Della Regina."

Through a path in the woods, on the top of Mount La Frascara, we reach the archaeological site that today is part of the Regional Park of Roccamonfina e Foce del Garigliano.

The Samnites built these remains of "Mura Megalitiche" between the fourth and third centuries BC. This remains always been the centre of suggestions and beliefs. Some consider them to be the remains of a temple dedicated to a female divinity, while others believe they were a military refuge.

The "Orto Della Regina" is undoubtedly an enchanted and mysterious place that offers the most beautiful panoramic view of the northern area of Caserta, as far as the Aurunci Mountains.

We descend to the valley, to the centre of Roccamonfina, where we are welcomed by the magnificent Piazza Nicola Amore, developed since the Angevin hegemony.

We find ourselves on the ground trodden by Goffredo Marzano, Lord of Roccamonfina, Admiral and faithful adviser to the Crown, who went down in history for his participation in the Conspiracy the Barons against King Ferrante I of Aragon.

This event linked Roccamonfina to the Kingdom of Naples. The fortified castle built by Goffredo Marzano became a place of hospitality for the Neapolitan court until 1615 with the "Lady of Roccamonfina", Elena Aldobrandi, niece of Clement VIII.

She embellished the whole area with precious flowers, such as lime trees, which we can admire today in the same position where they were planted.

Today the square is dedicated to Nicola Amore, a lawyer and politician from Roccamonfina, who later became a senator of the Kingdom of Italy.

Therefore, the Square of Roccamonfina is not just a place of passage but a well of history in which to relive different eras.

Spirituality in the Mountains

Near the square, we dive into the past, into the 11th century, admiring the Collegiate Church of Santa Maria Maggiore. This church has undergone continuous renovations, preserving precious remains from the different eras.

The bell tower, outside the church, dating back to the late 18th century, is of great value, with a clock decorated with majolica depicting the four seasons. Adjacent to the church is the Parish Museum, which houses the sacred furnishings.

Remaining in a contemplative and sacred atmosphere, we walk to one of the most exciting complexes of 15th-century Campanian art.

The Sanctuary of the Madonna Dei Lattani,

Here another exciting legend awaits us, which today becomes the story of a timeless place.

The Sanctuary, located on Monte dei Lattani, one of the vast craters of the now-extinct Roccamonfina volcanic district, originates from the place where the statue of the Blessed Virgin was found.

At the end of the 14th century, a local shepherd was taking his flock out to pasture, and every day one of his goats would wander off, returning in the evening and giving more milk.

The shepherd was intrigued and followed it, arriving at a cave. There he found a trunk and, thinking there was a treasure in it, he opened it but was immediately frightened by the snake guarding the box, which had two keys in its mouth.

With great fear, he returned to the village and with the help of the other villagers, he took the keys from the snake and opened the chest.

Everyone was surprised to see the Icon of the Blessed Virgin in lava stone.

Since then, it has been the destination of crowds of pilgrims who reach the sanctuary after an exhausting walk to ask for grace. The devotion was so intense that San Bernardino and San Giacomo Della Marca built the present sanctuary and founded the adjacent convent. Even today, it is still possible to enter the cavern, which has become a mystic corner, shrouded in rosaries, "trinkets", and family heirlooms left by the miraculous faithful.

The large courtyard of the Sanctuary has another corner that is very precious to the locals and the many believers who visit it.

In the extern space, on the left side is a fountain, la Fontana Della Madonna, surmounted by a majolica tile depicting the story of finding the sacred image.

Water gushes from this fountain, the source of which is in the cave, which is why it is believed to be miraculous.

It is believed that this weather helps couples who wish to have children because Our Lady of Lattani is the protector of 'infants', and many people testify to having received the grace of a child.

At the end of a journey through faith and legends in Roccamonfina's Mountains, do not miss the panoramic view from the courtyard of the Sanctuary.

From here, we enjoy a unique landscape, gentle hills covered with chestnut trees accompanied by an atmosphere of peace and serenity.

Walking through the vegetation around the Sanctuary: the legend of the chestnut grove

After all this walking, admiring and going back in time, you're certainly hungry. What does this fairytale place have to offer?

It is a vibrant place because it is surrounded and enveloped by impressive chestnut groves. And the chestnuts are also the product of a legend.

The story begins near the Sanctuary of the Madonna dei Lattani.

Here is still an ancient chestnut grove, which is said to have been planted in the 15th century by St Bernardino of Siena. The saint, who had come on a pilgrimage from Siena, is said to have produced the chestnut seed as proof of divine help, and in a short time, the chestnut tree sprouted, giving rise to an ever-blooming and prosperous production of chestnuts.

This treasure of Roccamonfina is currently waiting to receive the Protected Geographical Indication mark, as it is a particular type called "Tempestiva".

It is so-called because it ripens well in advance, the first to fall from the branches, heralding autumn. Its flavour is sweet, and it is perfect for the "Caldarrosta."

Roccamonfina is the home of roasted chestnuts.

The name " Caldarroste" derives from the onomatopoeic sound "Vrole" that emanates during cooking, so much so that the pan in which the chestnuts are roasted is called "Vrollaro".

As testimony to the importance of this fruit, a huge "Vrollaro" has been built in the central square. It is a giant, functioning, perforated pan capable of roasting 1,300 kg of chestnuts, which entered the Guinness World Record in 2018.

In addition to roasted chestnuts, chestnuts are used to prepare many typical sweet and savoury dishes, such as "bean, mushroom and chestnut soup", to which the other distinct product of this land, the "Fungo Porcino", is added.

The broadleaf woods on Monte la Frascara and the chestnut groves are the natural habitat for the growth of this particular porcini mushroom with its unique taste, also due to the volcanic nature of the soil.

In the shadow of the volcano opposite Vesuvius

The Roccamonfina volcano, the oldest in the region and known as the "neighbour of Vesuvius", is the guardian of this area's historical and gastronomic heritage in the upper Caserta region.

The Roccamonfina is a volcano, active between 630,000 and 50,000 years ago, which is now extinct but able to give fertility and abundant mineral salts to the land around it.

The past volcanic activity has shaped the territory, making it a rich and fertile land and the ideal place to enjoy hiking, horseback riding and cycling, along paths that lead to beautiful viewpoints and the discovery of authentic springs of oligomineral waters. 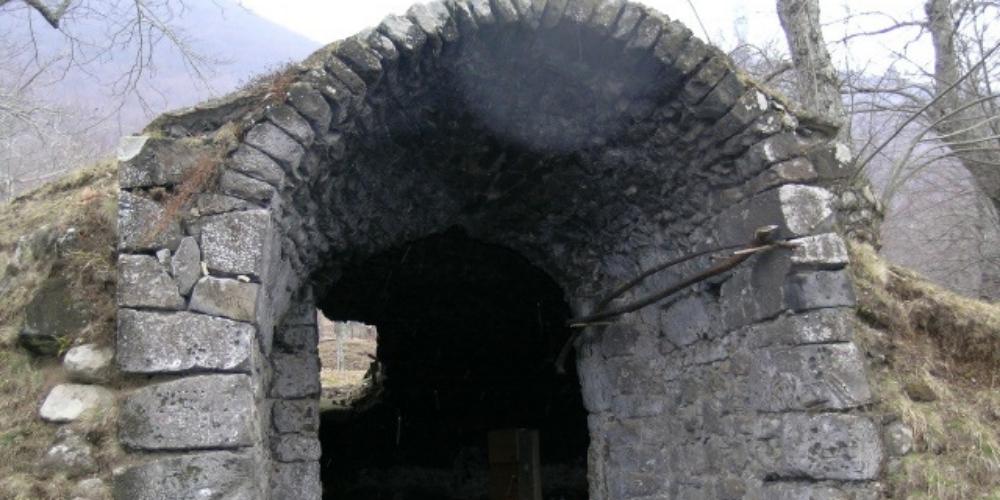 A popular activity for visitors is to photograph the typical "Nevere", which, before the invention of the refrigerator, were used to store snow for cooling food during the summer.

At the end of our marvellous journey through time, among fairy-tale places, expanses of chestnut trees, religious cults and legendary testimonies, the feeling is grateful for having received the wealth of an unparalleled natural and cultural heritage that is within everyone's reach ideal places for those who love the simplicity and authenticity of travel.