The Gigli of Nola, the celebration of a popular festival UNESCO heritage

Gigli: the symbol of Nola

Nola is a city in the district of Naples. In 2013 they obtained an important award: their Gigli Feast became officially part of UNESCO Cultural Heritage.

With the Gigli, Nola's people express their roots and history. The devotion to the Gigli Feast and its corporations has a strong and emotional meaning. However, the corporations aren't in competition with eachother, but they march to honour the city and the patron St. Paolino.

What are the Gigli of Nola? 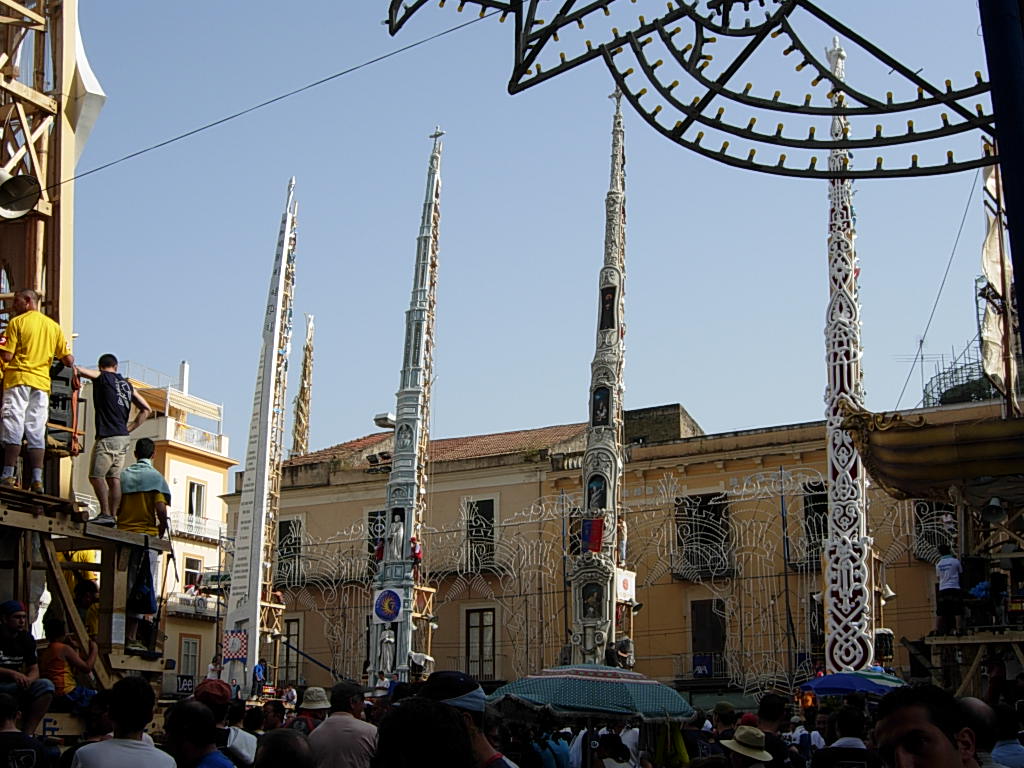 The Gigli are wooden obelisks. Since the 19th century, they are high 25 meters, they have a cubic base of about three meters per side and in total, they weigh 25 quintals.

Their look takes origin from the major-albero (big tree), that was used during the ancient pagan rituals as a symbol of fertility and prosperity. With the spread of Christianity, the meaning changed and these trees became a symbol of sacrality and devotion.

So, the Giglio is a symbol of faith and love for the Saint Patron. In the beginning, it was used as a simple decoration for the candles during the parade.

Nowadays, the Gigli are built around the so-called "borda" (absent in the four-sided Giglio), that is a central axle to which all the structural elements are linked. In this way, there is more flexibility and stability.

The Gigli are lifted and manipulated using a type of axes called varre and varretielli, these go on the shoulders of men called cullatori. Their name means "to lull", probably because of their swinging motion during the parade. To lift a Giglio needs 128 cullatori (men) that together form the Paranza (team).

The Gigli and the old art of papier-maché in Nola 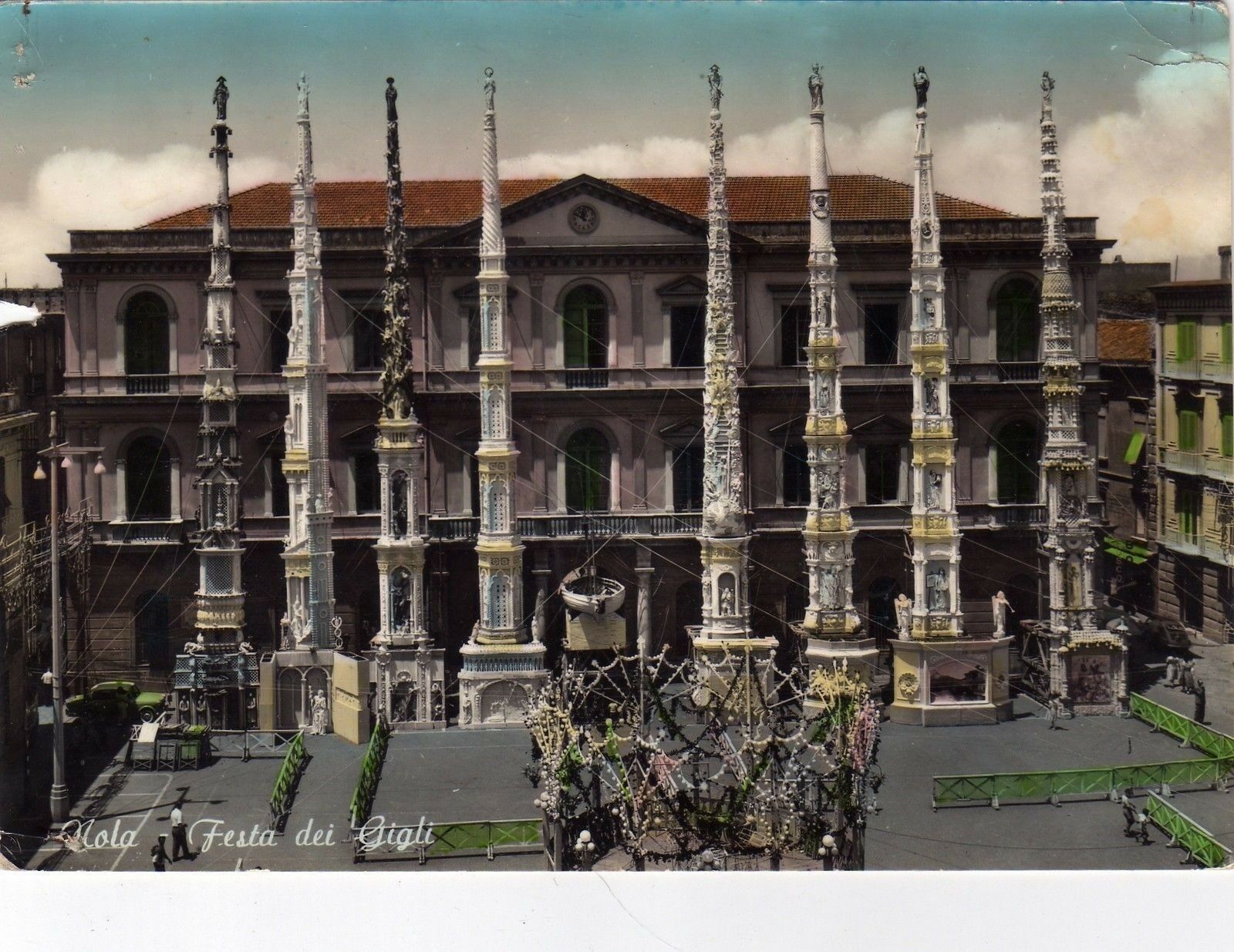 The Gigli are decorated by local artisans with papier-mache, stucco or other materials, taking inspiration from religious, historic, artistic, sport and current topics.

The art of papier-mache in Nola started thanks to the arrival of papier-mache's artists from Lecce (Puglia) and Neapolitan stucco decorators who had to set up and decorate the Duomo. The choice to cover the Gigli with papier-mache is not random, but it's due to its adaptability to the needs of elasticity and flexibility for the Giglio's wooden structure.

The Giglio's covering happens according to a precise technique. Its items, once ready, are placed on the walls waiting to be painted during the last weeks previous the covering. The figures and the ornamental designs are coloured step-by-step with watercolour. Before the last coat of paint, the artists verify the tonal effect putting the items under the sun and night light, before and after the drying, eventually grading the tonal variation.

Once finished, the various elements of the coating are affixed on the Giglio only on the appointed day for the dressing.

The history of the Gigli Festival in Nola

The history tells that about a hundred and fifty years after the death of Paolino, Bishop of Nola (on the 22nd of June in 431 AD), Pope Gregory, during one of his dialogue on charity, decided to tell the Paolino's adventures during the Barbarian invasions. At that time Nola was devasted by the Vandals.

Paolino spent all his resources in getting the Nolan prisoners back and helping the families fell through the cracks. One day, he was moved when a widow told him about her only son, who had been taken from her and sent to Africa as a slave in the court of the King's son-in-law. So, Paolino proposed her to exchange himself with her son. In the first moment, the widow refused but then Paolino convinced her and together they left for Africa. The mother requested an audience with the king, who accepted the exchange.

During his slavery, Paolino pretended to be a gardener and managed to have the friendship of some courtiers, telling them prophecies about the Vandals. When the king knew about his power of prophecy, he became acquainted with Paolino who, later confessed of being the Bishop of Nola. Worried about the revelation, the king restored his freedom and asked him if he would like anything else. Paolino answered the freedom for all Nolan prisoners. And so it was!

Afterwards, the folk legend tells that, when the people of Nola came to know about the Paolino's freedom, they welcomed the Bishop and the freed slaves by organizing the "Arts and Works Factions"' Parade and, as a joy's symbol, they brought a flower as a gift for Saint Paolino. This flower was the lily that in the Italian language is "Giglio", indeed.

Nowadays, flowers are replaced by wooden obelisk dancing, real giants that challenge each other along the streets of Nola with a spectacular dance of very high impact.

In 2020 the feast was cancelled because of the pandemic of Covid-19, to respect the national health provisions. Previously, during the all millenary history, it only happened during the Second World War age.

The Gigli Feast in Nola

The Gigli Feast is on the 22nd of June if it's Sunday, otherwise the immediately following Sunday. The Feast consists of the dancing parade of the 8 Gigli and the Boat, a structure similar to the Giglio but shorter. It refers to the return of St. Paolino in Nola by boat because at that time Nola's diocese used to extend till Torre Annunziata.

The wooden obelisks, instead, take their names from the old corporations of arts and works and during the parade, they follow each other according to an order unchanged over time: Ortolan, Grocer, Tavern Keeper, Baker, Boat, Butcher, Shoemaker, Blacksmith, Tailor.

The period when the Gigli festival takes place in Nola 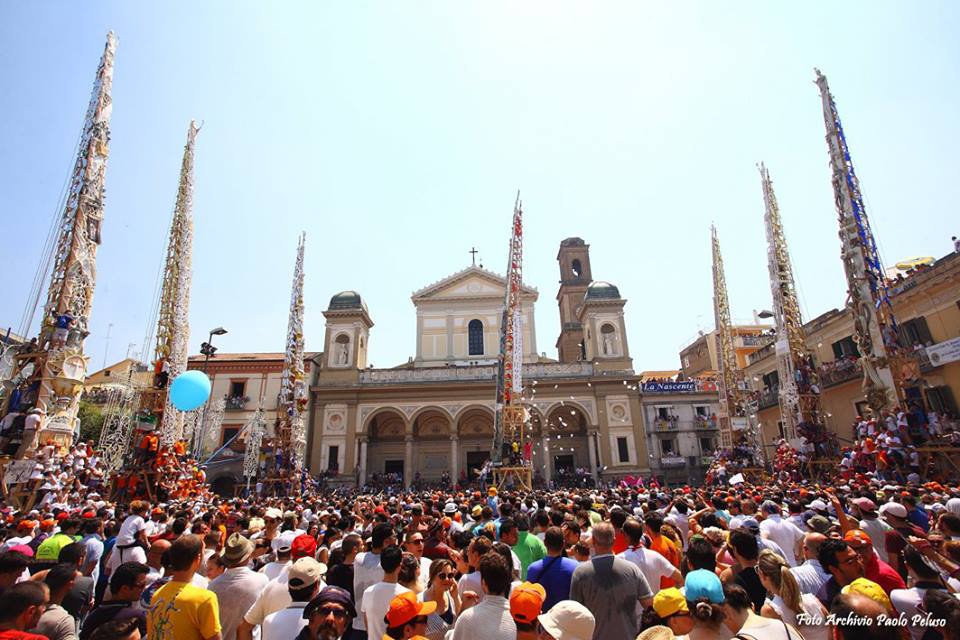 The celebration program follows an articulated and complex ceremonial, regulated by a definite script, during a time frame of a whole year. Indeed, as soon as the feast finishes, another year of "preparation" starts.

At the midnight of the next Sunday to the 22nd of June, while the celebration for the Gigli's Sunday still goes on, inside the City Hall, precisely in the offices of Police Command, there is the Gigli's assignment to the new Feast Master. In the past, the assignation was made for seniority, giving the Giglio to the older Feast Master.

The first shot (fireworks) announces to the population the Giglio's assignation to the Feast Master. The handoff from one feast master to another takes place in the months of October/November and it's marked by the flag-crossing. Every corporation has a different flag and Feast Master.

During the Spring, from March to May, the corporations organize the "collections". They are ritual moments, dinner or lunch, attended by hundreds of people, where they raise funds for the feast. In this way, everyone is a bit the owner of the Giglio. Today, the organization of a Giglio for one year may cost from 60,000 to over 100,000 euros.

When the collections' period ends, the Nolan June starts with a great celebration with music and toasts in the main square on the 1st of June. During the Nolan June, there are numerous events preceding the feast day, such as the borde's raise and the Gigli's building, the Giglio's Kid (tradition imported by the US), the serenade for the city, etc.

The weekend before the Feast, the Gigli are carried to the places where they will stay for the entire week before the feast. It's the Undressed Gigli Feast because they dance without their covering. Technically, it's a sort of testing for the Giglio with the men of the paranza. Indeed, it's also called the Day of Shoulders' Test.

When the Gigli are covered, in front of each of them, waiting for the Sunday, every night there is a show or a dinner. On the 22nd of June, there is the procession of the silver bust of St. Paolino, escorted by the corporations' flags and the committees of every Giglio that wear their t-shirt. The t-shirt is identification and membership mark.

The Friday before the Feast is called "the Dinners' Friday": streets, main entrances and squares of the city centre become sets for banquets and fun. On Saturday, there is the Committees Performance that parades along the streets of the city to pay tribute to the various obelisks playing "their songs" (written and rearranged by the respective musical divisions) and then, they go in the square in the order for the parade.

The Gigli's Sunday: the most beautiful day 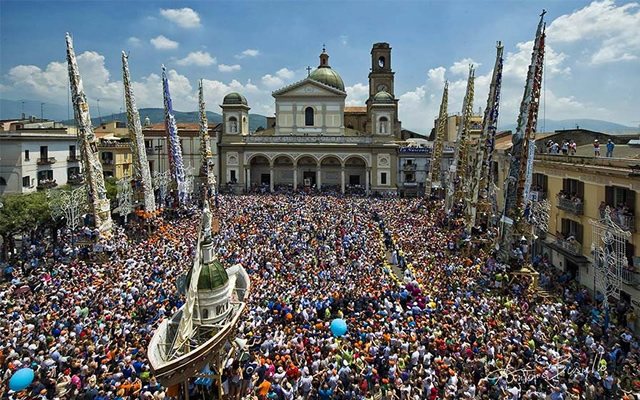 This day for Nola's people is everything...love, feeling, madness!

It starts already at 4 a.m. when some men provide to set up the "bar" mounting them at their base. This operation is very important.  The success of the Giglio's performance depends on it.

Around 9 a.m., in front of every Giglio, there is the Holy Mass, officiated by the Bishop of Nola. Soon after, the Gigli are carried on the shoulders form their ward to Piazza Duomo (the main square of the city). Here, they perform for a long "dance" and then stop themselves for a short time on the sides of the same square.

Around 1 p.m. the Bishop form the Church, with a group of people that bring the Bust of St. Paolino, blesses the Gigli. After this, the first part of the feast finishes. We have a lunch break before the starting of the famous parade through the city streets.

It starts around 4 p.m. from Piazza Duomo and goes on all night. The traditional route is called Gigli Dance. It winds along the historical city centre, to the rhythm of songs every year more original. They reinterpret famous songs that are rearranged to go along with the Giglio's carrying. During the route, the cullatori face ability and strength challenges in pre-established strategic points of the city, such as the Caporossa and Carceri's "turns" and Piciocchi Street (very narrow).

When the last Giglio (the Tailor) finishes the route, the feast is over. What's the time? It's 6 a.m. or later!

On Monday, the Gigli are lined up in front of the City Hall and stay there till the end of the feast. The feast is officially finished when the Gigli are "unclothed" and shot down. This moment is called "Broken Heart".

But there's no time for regrets! Meanwhile, there has been the Gigli's assignation to the new feast masters for the next year. It's for this reason that in Nola it's said that "the feast is born just when it dies".