The hilly part of Naples: the Vomero area

Naples, a city mainly remembered and mentioned for the sea, that magnificent seafront that we find in Mergellina or for the views overlooking the area. Yet there is a very characteristic hilly area, an area full of things to see and visit: Vomero area.

As just mentioned, this is a hilly area, reclaimed in 1600 and in the following years the aristocratic families and nobles of the city of Campania came to live. In fact, this is due to the presence of the magnificent Villa Floridiana, hence one of the most beautiful views of the city of Naples.

An area located a tad higher, geographically speaking, above the rest of the city center. It remains however very easy to reach, in fact you can arrive either by bus starting from the National Museum area, or by funicular starting from Toledo or Montesanto area or by metro. The latter is the best route because it makes several stops in this area. But what is there to see at Vomero? 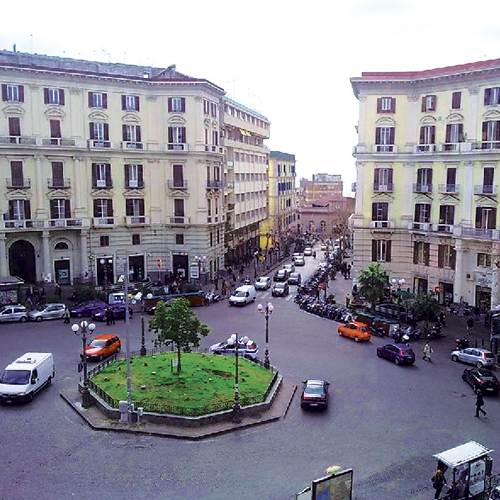 One of the most important squares of the city, the shape is octagonal in plan. The heart of the district, a sort of quadrivium to access the most important streets. In fact, it is an intersection between Via Scarlatti and Via Bernini, streets full of many local activities and not only. In the second we find several shops and many activities for street-food, while in the first we find local shops combined with major brands of world-class shopping and fast-food franchise and a little less local for local street-food. In Via Scarlatti are also organized several fairs, from here we can reach Via Luca Giordano and Via Cilea, very important shopping streets, going down it. While, uphill we can climb towards Castel Sant’Elmo. All this not far from Villa Floridiana, a magnificent green oasis in the heart of the neighborhood.

A very recommended area to eat something typical of Neapolitan cuisine, but especially important for the connection with the funicular. Several local activities in this area and in the evening a good meeting for the youthful nightlife on the steps that connect the area. Very close to several lounge bars (some very special and characteristic), ideal for afternoon aperitifs or for a little relaxation in the Neapolitan night.

A series of very characteristic streets where you can find the historic market of the same name of the district, everything is perhaps even more magical during the Christmas holidays. Great area for who love local markets and little shops, a local shopping street to be discovered.

Here is the highest point of the district, also the highest point visible from SpaccaNapoli. The places of interest at the end of the descent that leads to the square are really numerous and all to be discovered. Starting from the majestic Castel Sant’Elmo as soon as you arrive in the area, the Pedamentina in San Martino, the Certosa and the Museum of San Martino, the Neapolitan Museum of the twentieth century. Finally, last but not least in terms of beauty, the Belvedere San Martino where you have a magnificent view of the city.

One of the most interesting streets of the Vomerese area, you need to reach it by car or bus. A long street well known for nightlife, lots of lounge bars open all night, several areas occupied by young people at night, especially in summer and on weekends. A great view and a very nice area to spend pleasant evenings relaxing.

Moving away from the sea, Naples is always magical and to be discovered…