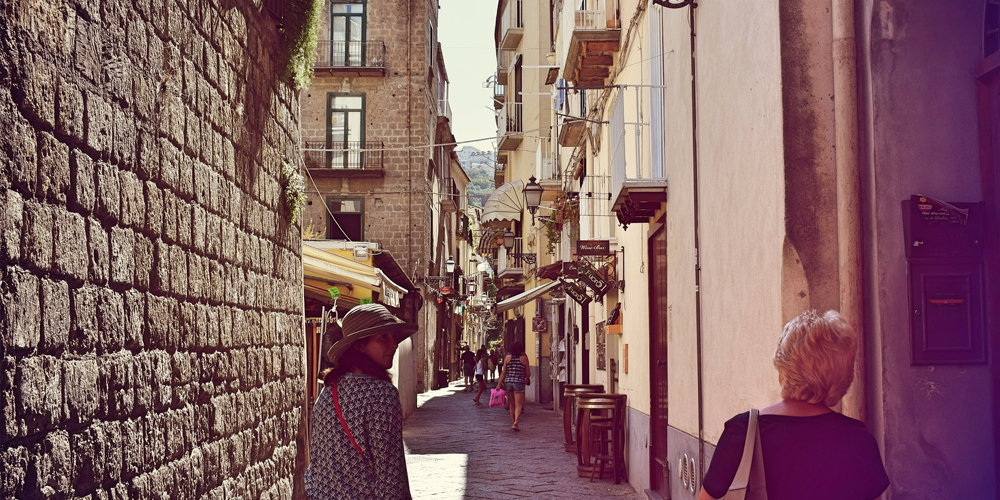 A few kilometers from Naples, there is a treasure chest of unique beauties: the Sorrento peninsula. In this strip of land that divides Naples from Salerno, there are places that envy the whole world. Amalfi, Positano, Ravello, Maiori and in particular Sorrento. In Sorrento history and culture merge with the breathtaking views that give on the Gulf of Naples.

The history of Sorrento

Sorrento has a history that dates back to the ancient Italic peoples, who colonized the area before the Greeks and Romans: the Etruscans and the osci, who fought bitterly with the Romans for the dominion of their territory.

Sorrento has always claimed its independence enough to become a duchy, but after the XII century, it was absorbed by the Norman kingdom. From here began several years of internal struggles between Sorrento, Amalfi and the Saracens that led Sorrento to become the city we know today.
Among the beauty to be seen in Sorrento, there are certainly the port of Marina Piccola and the seaside village Marina Grande, the Cathedral of Sorrento, Piazza Torquato Tasso, Vallone Dei Mulini and Sedil Dominova.
Sorrento has been a tourist destination since the times of the "Grand Tour"; important guests such as Byron, Keats, Scott, Dickens, Goethe, Wagner, Ibsen and Nietzsche have come to Sorrento in search of sun and inspiration.
In the wide range of touristic offers Villa Manning Relais stands out for its particularity.

The story of Villa Manning in Sorrento Villa Manning is a fascinating historical residence with a facade punctuated by a series of windows surmounted by pointed arches and surrounded by ornaments reminiscent of medieval fortresses.

Inside, the rooms have been completely restored, but have retained their character. Many of the furnishings are period and the colours largely resemble those of the peninsula and the entire city of Sorrento.

The garden is a real wellness oasis a stone's throw from the centre of Sorrento.

In fact, the building is at the entrance to the north of Piazza Tasso and stands on the ancient valley known in Sorrento as "Prossimo" which connected the Vallone Dei Mulini to the port of Marina Piccola.

For years, the Villa has hosted prominent personalities from the national and international scene, from diplomats to politicians up to men of letters such as Roberto Bracco, historical Italian playwright and pupil of Matilde Serao, repeatedly nominated for the Nobel prize for literature or the Danish consul Clauson, who had relationships with Henrik Ibsen, a famous Norwegian playwright, during his stay in Sorrento.

Staying in a wonderful Villa in Sorrento

Staying in Sorrento is almost a must for anyone visiting the coast and the real luck is that you can now stay in a historic and elegant location. Now the marvellous Villa Manning has been transformed into a great relais hotel, equipped with luxurious rooms, an outdoor swimming pool and a beautiful garden. The hotel has all the types of services that can be offered from breakfast to car parking, to Wi-Fi, baggage storage and outdoor furniture that can make your stay experience comfortable.

The customization of the services is the trademark.

So if you need a corner of tranquillity, ideal for those who want to stay in the centre without giving up on relaxation, Villa Manning is the hotel for you.

Tired of the chaos of the city? Sorrento is the right place to disconnect right now, come and enjoy Sorrento's beauty and relaxation.