The underground of Naples: tour of Via delle Memorie

Journey through memories: a tour to discover

There would be no more suitable name because this tour is a real journey down memory lane that begins from the outside of the Palace, where the history of the noble family of Genoese origin, settled in Naples in 1679, will be told.

From the octagonal courtyard we will proceed, after passing through the great archway, up the imposing monumental staircase, which is the architectural peculiarity of the palace built by Ferdinando Sanfelice. The enormous white marble stairs, joined together by a double ramp, lead to the main floor of the Dukes Serra di Cassano, which today is the seat of the Italian Institute for Philosophical Studies and its library which has over 160,000 volumes.

Inside, in the halls, it will be possible to admire numerous frescoes, decorations with rococo stuccoes and neoclassical furniture.

The visit will continue to the basement of the building, where once there was the carpenter's shop of the Serra family and which was the first shelter during the Second World War.

Today those rooms that were carpentry are the rooms of Interno A14, art gallery born in 2013, also used for events and conferences, managed by the artist who conceived it, Vincenza Donzelli.

In the rooms of Interno A14 you will find a small museum with war findings found during excavations, and 115 steps that will take you to the underground where you will reach first the quarries, from which the tuff was extracted to build the Palace and then the aqueduct below, where an extraordinary cistern full of water awaits you. The play of lights will help create a breathtaking effect.

During the tour, you will walk down another monumental staircase that connects the upper rooms of the palace to the cistern of the famous Aqueduct of the Bull, through which the city of Naples was supplied with water.

These places, during the Second World War, were adapted as air-raid shelters, where even the former President of the Republic Giorgio Napolitano, who then resided in Via Monte di Dio, found asylum.

Those who have already had the suggestive experience of "Via delle Memorie" tell of being impressed both under the historical and the emotional aspect. With the stories of those years told by the guides, it is natural to identify with the fear and the feelings of those who lived through the war.

Along the way, for example, you will also find a room that was reserved for the Milizia Fascista, equipped with a telephone that allowed the soldiers to coordinate the operational phases even during the bombings.

Among the most beautiful experiences to be had is definitely "Via delle Memorie", the youngest and least known route of the Bourbon Gallery. Inaugurated in January 2015, after three uninterrupted years of work, excavations and rediscovered finds, this route is an extraordinary journey to discover Naples "below". How many events and curiosities are enclosed in these places, over 500 years of history retraced from Palazzo Serra di Cassano, one of the most beautiful palaces of the Neapolitan 700 that stands out on the hill of Pizzofalcone, through tunnels, stairs and cisterns, until you reach the Bourbon Gallery and then reach the exit inside the Morelli parking lot.

Historical notes on the bombing of Via delle Memorie 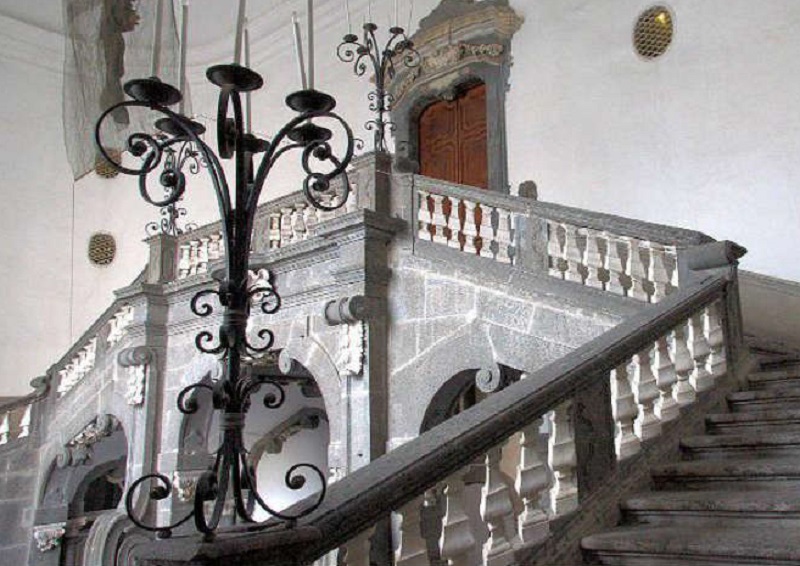 During the Second World War, when Naples was repeatedly bombed, and all the existing environments in the basement were adapted to shelters for the population, the staircase that connected the building with its basement was expanded, as well as the same environments were expanded and modified. Walking along the "Via delle memorie", fascinating elements of the history of the Neapolitan city emerge, a city stratified by centuries of dominations, a hollow city, whose underground was used as a shelter and not only.

The visit ends by crossing the last meters of the Bourbon tunnel, a nineteenth-century military route, used from 1959 to 1970 as a judicial deposit of the city of Naples, here you will see some cars and statues that had been buried and found during the excavations.

With "Via delle Memorie" the underground environments of that area have all been rediscovered and freed.

Virtual Tour of Via delle Memorie

From anywhere in the world you can connect live with a guide who will allow us, albeit remotely, to enjoy the extraordinary beauty of the tour.

The charm of the Bourbon Gallery has also conquered the world of cinema and fiction. The path of Via delle Memorie, in fact, has been the set of numerous films, documentaries and television series of great success, including "I bastardi di Pizzofalcone", "Rosy Abbate" and the recent "Mina Settembre" currently being programmed on Rai 1.