Have you ever seen a little lake which stands at the bottom of an ancient  crater of a volcano?? And have you ever been into a small house which stands upon a little island? No? What are you waiting for? Don’t miss the chance to have a romantic walk around one of the most  beautiful landscapes near Naples, and in one of the most peculiar buildings of the Borbonic era (both on the flegrean coastline):  Miseno’s Lake and the ‘Casina Vanvitelliana’.

Miseno’s Lake rises between the headland of Miseno and Monte di Procida, and extends for more than 40 acres, with a perimeter of 2.800 metres wide and 4 metres deep. It represents one of the most impressive touristic views of all the flegrean coastline, thanks to its position and surrounded by fancy sights and passages where it is possible not only to have a walk, but also to do jogging, ride a bike and all the activities you prefer. There are also bars, restaurants and some many benches on which you can sit and look at the beauty you are surrounded by. But which were its origins? 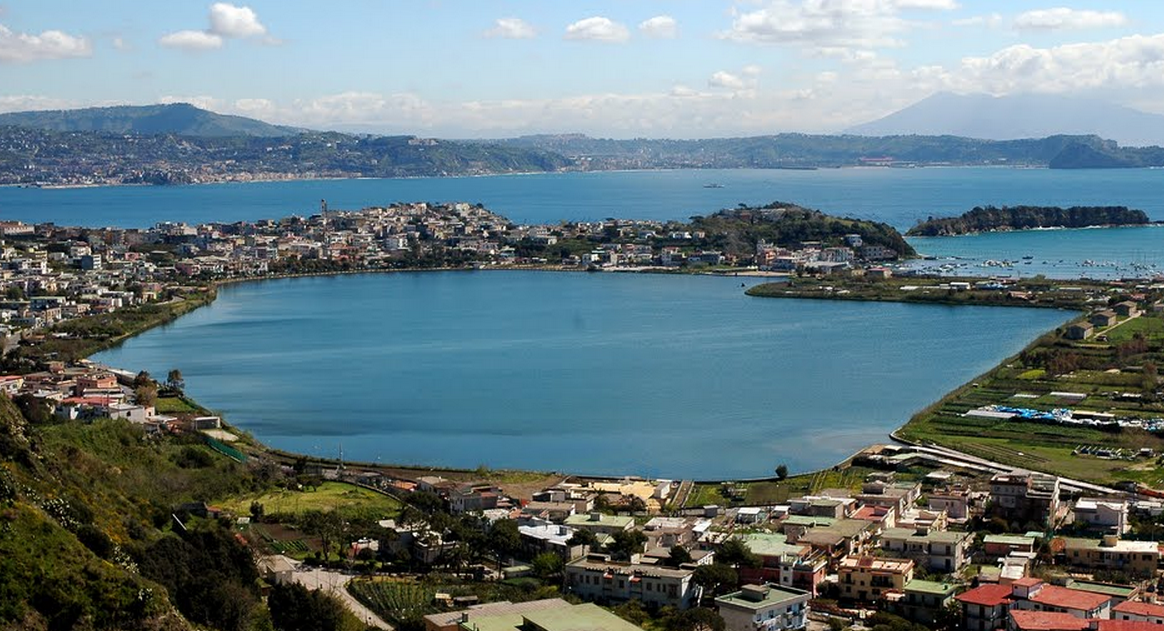 If you are fond of mythology and history, you may not  know that its name comes from Miseno, a mythological character from Virgilio’s “The Aeneid”– (Book VI).  According  to the legend,  he was a bugler of the Troian army guided by Enea that drowned into its waters and then buried by Enea himself under a great mound that later was identified with the headland of Capo Miseno.  Since then, its importance as a strategic point for all the merchant vessels grew more and more during the Roman period.  As a matter of fact, it became the most important harbor of all the Campanian coast (together with Capo Miseno, Bacoli’s heights and the sandy dune of the coastline), from which extended two natural ponds:  the lake shore used as an area for ships’repair and the roadstead which was the real harbor. Then, it became the terminal point of a big container which flew into the “Piscina Mirabilis”, able to bring in Naples the water from Serino aqueduct, in order to provide both Naples and the Roman fleet here allocated. After the 5th century, it became a little pond which was later called ‘Maremorto’ (‘Dead Sea’), because of its small sandy coastline.

How to reach Miseno’s Lake 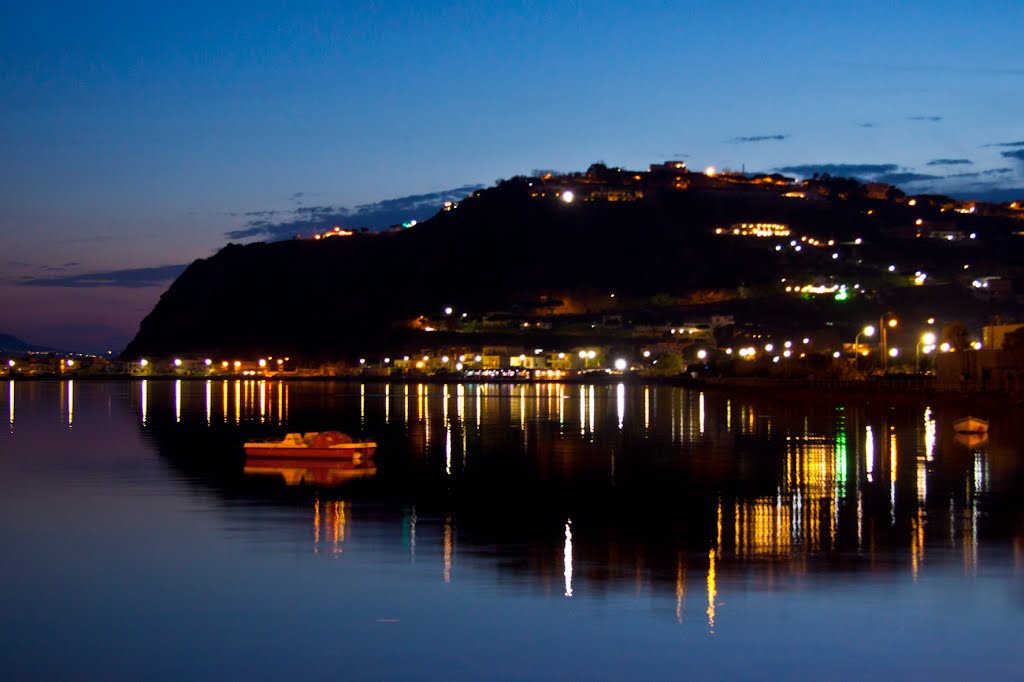 Naples’ highway-, exit: Arco Felice- Pozzuoli. Once you arrived in Bacoli- Baia, on the left (after 500 metres), in via Risorgimento,  you can find the area parking.

Some kilometres away from Miseno’s Lake,  it is possible to find the beautiful Vanvitellian Park, in which rises this marvellous building upon a small island,  firstly  used as an ancient hunting lodge belonging to the Bourbon family and known as ‘Casina Vanvitelliana’.

History of the Real Bourbonic Site 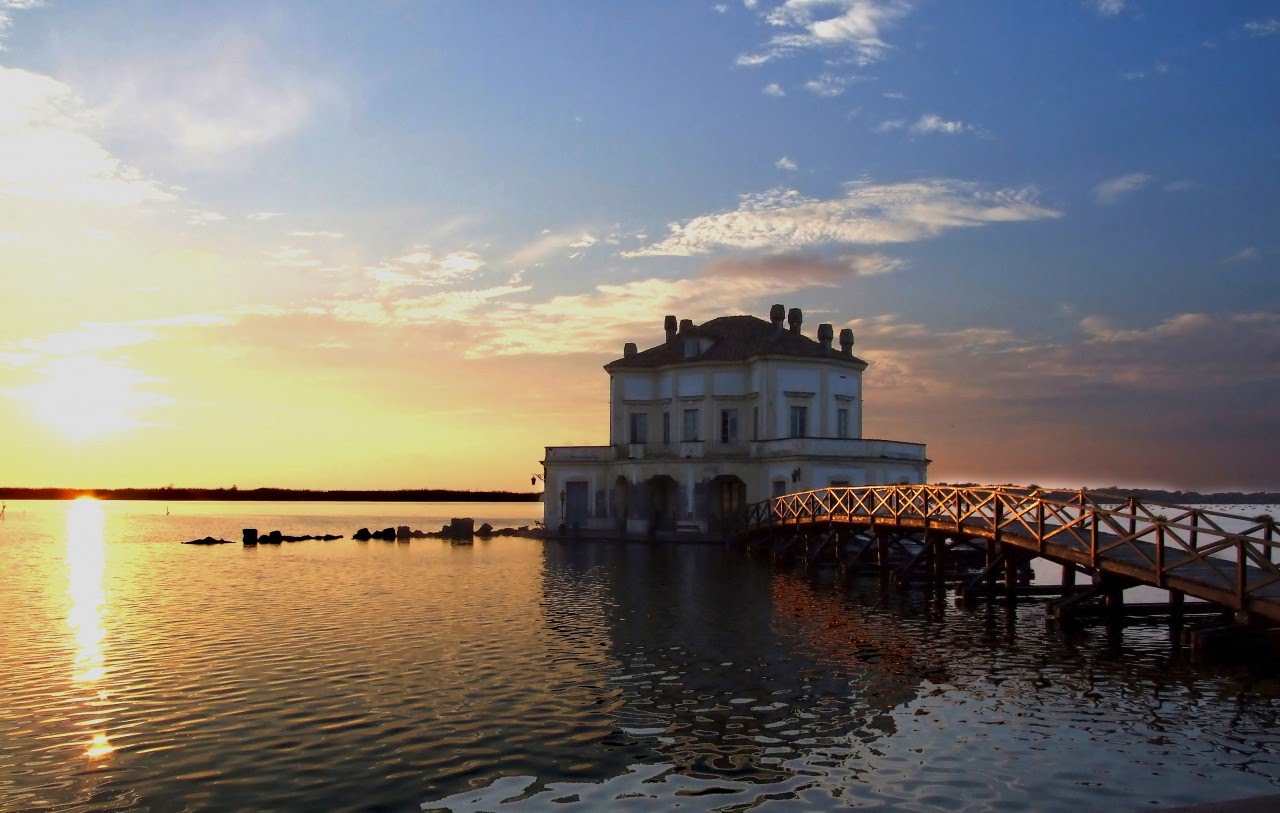 The Real Bourbonic Site was born in 1764, when Ferdinand IV of Bourbon decided to give value to the entire lacustrian area, ordering the architect Carlo Vanvitelli to build up an hunting and fishing lodge on a preexisting small island. He started the works strenghtening the small island with such big rocks; the result was this poligonal small houses which rises from Fusaro’s Lake and structured two levels with terraces on both the two floors. In 1799,  the Real ‘Casina’ was striked by the riots, during which four important paintings were stealed and never gave back. Then, it became destination of many illustruous guests, such as: the Austrian Emperador Francis II with his wife; the Prince and the Princess of Sassonia; Prince Metternich and also musicians and artists such as: Rossini, Van Pitloo and the Neapolitan painter Giacinto Gigante, who eternalized its atmosphere in their paintings and works. 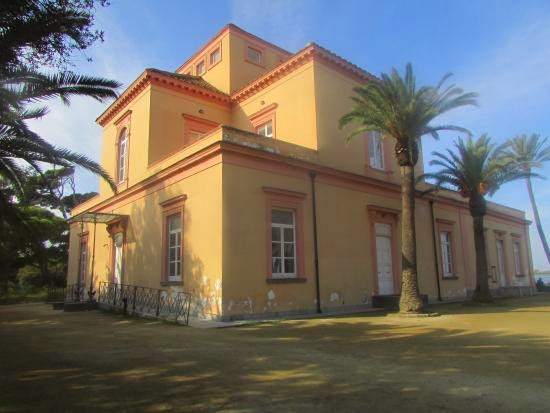 Today ‘the Real Casina Vanvitelliana’ is  accompanied by  another building, called The ‘Ostrichina’s Room’, built in 1817, by the architect Antonio De Simone in order to remind the particular desire of Ferdinand IV to build "a brand-new building, called ‘The Ostrichina’, for those who can’t enjoy ‘the Real Site‘"

How to reach the Real Casina