What emotion does Naples give to tourists? discover through the senses 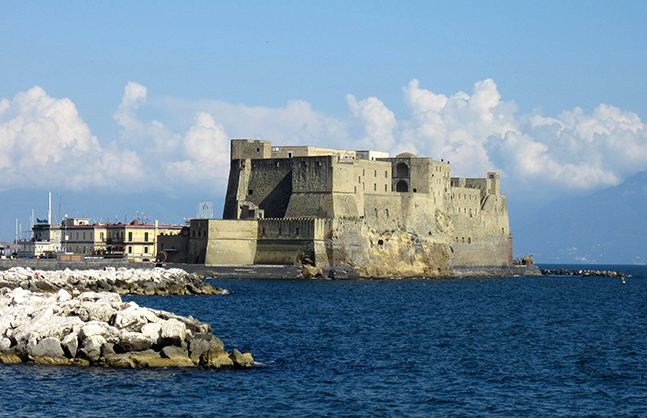 "What's the emotion Naples gives to you?" This is the question we asked tourists in Naples. What were the answers? A mix of spontaneous smiles, joyful looks and enthusiastic words, a cascade of adjectives filled with emphasis and amazement. The moods of the interviewees reveal how the spectrum of emotions in Naples is rich in sensations and colors.

A tracking shot of enchanting places is the background to the statements of tourists in Naples taken in the video: the panorama of Mergellina overlooking the sea, the fabulous Castel dell'Ovo and Maschio Angioino, the fascinating underground of Naples, the lively Centro Storico with the characteristic shepherds, the majestic Piazza Plebiscito with the prestigious Palazzo Reale and of course pizza, coffee and other tasty dishes.

What did tourists in Naples love of this magical and colorful city? Some of them uses a single adjective as "wonderful" or "beautiful" to enclose the emotion that the city gives; somebody else defines it as "extraordinary" or "different", alluding to its uniqueness that differentiates it from any other place; anyone else describes it as "alive", "energetic", "vibrant" and even a bit "crazy" because it is surprising, cheerful and full of life. Someone was impressed by its historical wealth, monuments, churches and palaces; others exalt their tasty food and good weather, while others have loved to have walks or get in touch with locals, defined as "vital","sympathetic" and "hospitable".

With a veil of nostalgia already lying on his face, a tourist talk about memories and photos that he will bring with him. Another interviewer thinks to recommend the city to his friends. Everyone was emotionally involved with the charm of Naples, without distinction of geographic origin and age. The interview ends with a smile and a greeting that sounds like an invitation addressed to future travelers, exclaiming: "Welcome to Naples!"

To find out what the tourists think of Naples, watch the video

"Emotional" Naples, that of the heart, in which feelings merge with the elements of the city, involving all the senses. Here are some tips on where and how to live it, enclosed in a classification that lists them based on emotions and perceptions. 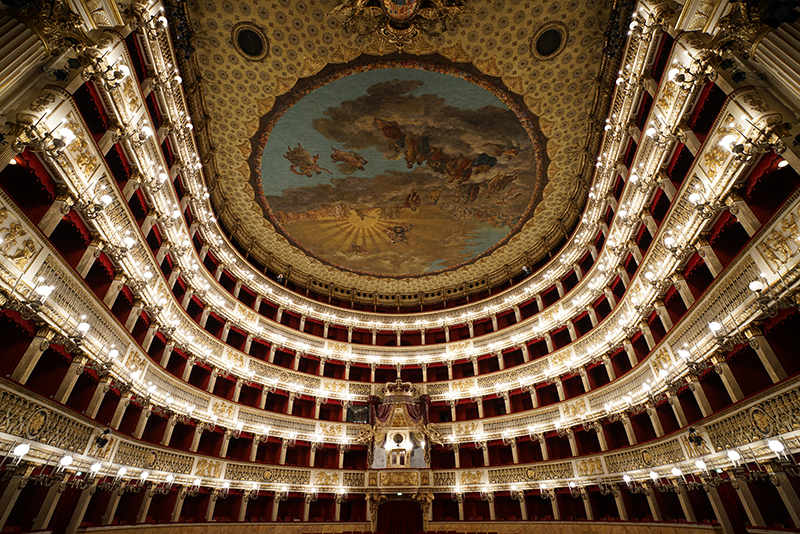 With its music, voices and sounds, Naples is like an orchestra that originates thousands of melodies. Music is the soul of the city and cheers up its fascinating places. From the stage to the alleys, from the prestigious Teatro San Carlo to the melodies that come to the ear while walking near the Conservatorio di San Pietro a Maiella, music vibrates and spreads in every string of the Neapolitan soul.

Music has always a trace of joy, as in the lively "tarantelle"; of melancholy, as in sublime jazz melodies; of love, as in the romantic classical song. Neapolitan music is a passion. With over 500 years of history, it is a real pride for the Parthenopean people, who listen to it to find comfort while facing up their daily problems.

Near the suggestive Piazza Plebiscito, you can visit one of the most famous and prestigious theatres in the world: the wonderful Teatro San Carlo, an undisputed house of music and scenery of various and fascinating shows. Not faraway you find the elegant Galleria Umberto I, which houses the Salone Margherita, the first Italian café-chantant, tread by artists of great success. From this location,  it is a must a walk along Via Toledo, a road ideal for shopping but also to attend the colourful musical performances of street artists.

Coming up to the Piazza del Gesù and observing the front of its majestic church, your eyes can not only see the ashlar, but also some mysterious signs linked perhaps to the music. The carvings could correspond to letters of the Aramaic alphabet, equivalent each to a note. Their combination creates a music lasting almost 45 minutes, composing the score of a concert for pick instruments, perhaps executed in the church many years ago. 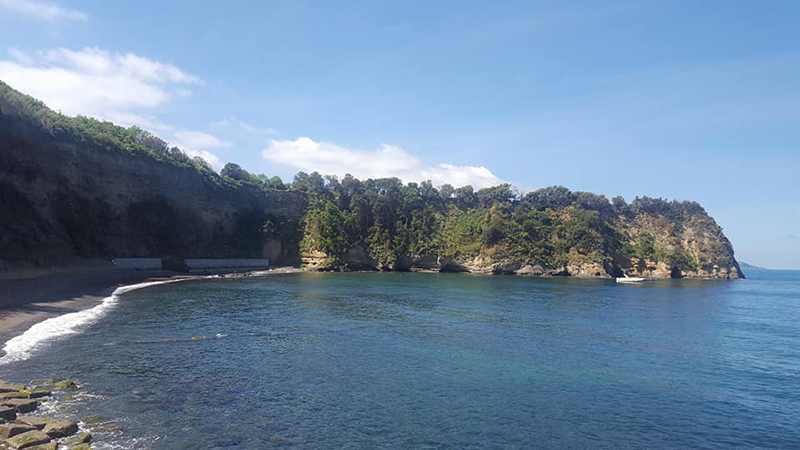 Naples is one of the most represented Italian cities in the cinema, between alleys, galleries, hills and palaces. Rediscovering its cinematic charm is to make a suggestive journey in the places that have made the sets for many masterpieces. Walking through the scenes, listening to the most famous anecdotes about actors and filming and admiring the monuments of the city, creates a tale that involves and excites. The Neapolitan cinema, even in its reflective and melancholic shades, always manages to get a smile. Just think about the "Prince of Laughter"- the beloved Totò - and the great Eduardo de Filippo.

Naples is an open-air theatre, a show always on stage that turns into a real pleasure to the eye. One of the most fascinating settings is that of the famous movie "Il postino" by Massimo Troisi and Michael Radford, shot on the picturesque island of Procida. Reach the "Spiaggia del Postino" to spend a day of relax, but also for leaping into the movie screen, as if by magic.

The Centro Storico, then, is the cinematic location of many memorable movie including “Operazione San Gennaro” by Dino Risi, “Questi fantasmi” by Eduardo de Filippo,“Matrimonio all’italiana” by Vittorio De Sica, with an extraordinary interpretation of the beautiful Sophia Loren. Art in Naples is like a sparkling showcase that gives visibility to its various expressive manifestations. It explodes in the buildings, builds the streets and draws the landscapes, amazing who contemplates it. Royal palaces, fairytale castles and enchanting villas erect on a land rich in history and soul. Art is tangible everywhere and the contact with its multiple forms magically brings back in time or builds new atmospheres.

A pleasant itinerary starts from the Isolotto di Megaride, erected in the enchanting scenery of the seafront and dominated by the panoramic Castel Dell'Ovo, always open for free. Not too far away we find Piazza Plebiscito and the Palazzo Reale, with its fantastic interiors, the prestigious Teatro San Carlo and the majestic Maschio Angioino or Castel Nuovo, real milestones.

Triumph of art and regality is also the largest royal residence in the world: the Reggia di Caserta, declared by the UNESCO patrimony of humanity. It is suggestive to go into its sumptuous Baroque palace, admire the works of the gallery and walk in the beautiful park characterized by endless gardens and suggestive fountains.

The Museo Archeologico Nazionale, instead, boasts the most valuable patrimony of works of art and archaeological artefacts in Italy and exhibits fascinating and contrasting figures: from the particular sculpture depicting Artemide Efesia of the Farnese collection, up to the Roman fresco called Saffo, which portrays an elegant maiden of the high society of Pompei. The scent of the sea, the smells of nature, the fragrances of freshly baked pastries and of the hot pizza, the aroma of the coffee. Walking along the streets of the city is like to fill the nostrils with intoxicating essences, which stimulate contemplation or appetite. An experience that preserves memories of a sweet nostalgia in the heart of the tourists in Naples.

A "living" land, which with its fumes always makes its memory active, like a volcano. In this regard, it is worth to discover the suggestive Campi Flegrei, immersed in the mythical and poetic atmosphere of arcane cults and legends. It will certainly be enjoyable to stroll along the picturesque seafront of Pozzuoli or on the shores of the volcanic Lago D’Averno, a mythical gateway to the Homeric Hell and the seat of an oracle chaired by Queen Persephone.

It is also worthwhile to visit the Solfatara, the most interesting volcano of Campi Flegrei, consisting of about 40 ancient volcanoes and recognizable by the unmistakable smell of sulphur that they emit. Finally, you must not miss the Acropolis of Cuma, where you can delve into the magic cavern of the Sibyl (Antro della Sibilla) and the waters of the Parco Sommerso di Baia, for a fascinating immersion among the artifacts of the true "Atalantide" of Campania. Naples is not only the capital of the Mezzogiorno of Italy, but it is also the queen of one of the most good and varied culinary cultures. Knowing the history of the city through its cuisine means learning to savour the Neapolitan life. An experience of taste that gives emotions that cannot be told, you have to taste them!

The Neapolitan cuisine opens to the different palates proposing the most varied flavors: salty or sweet, land or sea, with typical dishes characterized by the territoriality of the raw materials.

As known, the Centro Storico is a furnace of greedy and appetizing dishes, such as the characteristic "Cuoppo of Zeppole and Panzarotti" or fish, the fried pizzas or the "pizza a portafoglio" (folded in the straw paper), the pastry "Babbà" and "Sfogliatelle". But if you want to discover other beautiful areas of the city, without sacrificing pleasures for the mouth, the refined district of Vomero is a good choice.

You can look out at the panoramic and romantic terrazza di San Martino and visit Castel Sant’Elmo, which dominates the city from above, perhaps after an aperitif in the popular Piazza Vanvitelli. Next to the fortress, there is the Certosa di San Martino, a jewel of architecture and Baroque art and a pivot of Neapolitan painting of the seventeenth century. It is a great idea to complete the itinerary with the Villa Floridiana, a royal residence immersed in a scenic park crossed by shady groves and false ruins.

Naples is a bewitching and mesmerizing city, just like the mermaid that landed on its shores marking its origins. Parthenope, with its legend, is the first to impress a footprint, but there are many figures, victims or executioners, naive or cruel, noble or poor, who cast the stage of the mystery with their emotional universe. Vengeful witches, maidens murdered beacause of deadly jealousies, killer Queens, melancholic souls, immortalized their traces in history, beliefs or cults that forge the culture of Naples.

A veil of fascinating fear stretches along the streets, with a dense atmosphere of secrets and a charge of mesmerizing beauty. The palaces are not only buildings, but perennial refuge for restless ghosts; Nature is not only a frame of landscapes, but also a cradle of the myth and the arcane; Churches are not only sacred places, but reveal suggestive profane elements. The mysteries of Naples are amazing!

A good exploration starts from the historic Port'Alba, portal of access to libraries and place of bloody chronicle, in which echoes the legend of Maria La Rossa, vengeful witch with the broken heart. Along Via dei Tribunali, you can visit the Chiesa del Purgatorio ad Arco, home of the “anime pezzentelle” (Poor Souls) and the skull adorned with a wedding veil belonged to Lucia, maiden who never succeeded in consuming her wedding.

In Palazzo Spinelli harbors the ghost of the young Lady Bianca, walled alive by the noblewoman of the house, moved by an unfounded jealousy, while in Vico San Domenico Maggiore, in Palazzo Sansevero, it is imprisoned the soul of Maria D’Avalos and her clandestine lover Fabrizio, killed by Prince Carlo, consort of the woman. Finally, in Piazza San Gaetano, in the underground of Naples, resounds the story of young sprite nicknamed “monaciello”.

So, if you choose to visit this city, entrusted to your emotions and prepared to feel passionate, surprised, joyful, nostalgic, amazed. Without a doubt a piece of your heart will be stuck in the alleys of Spaccanapoli or on the seafront of Margellina. For tourists in Naples there is no more intense experience than to live the city in all its colors and to realize then to feel the lack of that cheerfulness, of those voices, of those smells and of those landscapes, but they will always be alive in the memories.