The beauty of Naples is growing day by day, week by week, when you discover its secrets, the stories, the legends when you're in touch with native...but one thing you immediately pointed out: Our bay, the most beautiful of the earth, and the whole panorama that makes a magical framework. wrote the journalist Guido Piovene about the gulf of Naples.

Well, the gulf of Naples, or Crater, to put in the Latin manner, is a sublime and evocative inlet of the Tyrrhenian Sea, located in the South of the city. It is included in the "embrace" between the Phlegrean Peninsula and the Sorrentine Peninsula.

Geography of the gulf of Naples

The coastline of the gulf of Naples extends for 195 km, stretching from monte di Procida (in the northeast) to Punta Campanella (to the south). It includes all the gulf of Pozzuoli, the Neapolitan and Vesuvian coasts, the Sorrento coast and the coasts of Ischia, Procida and Capri.

The royal Vesuvius stands majestically in the east of the gulf of Naples. Other "giants", such as the monti Lattari, dominate the south with their fascinating hiking trails, while the mythical Epomeo mountain watches over the gulf protruding from the island of Ischia.

The islands of the Campano archipelago are distended as enchanting sea oases of the gulf of Naples. The most important are the dynamic Ischia, the picturesque Procida, the naturalistic Vivara and the refined Capri, followed by the small Nisida, which is located in the gulf of Pozzuoli.

Panoramic views of the gulf of Naples 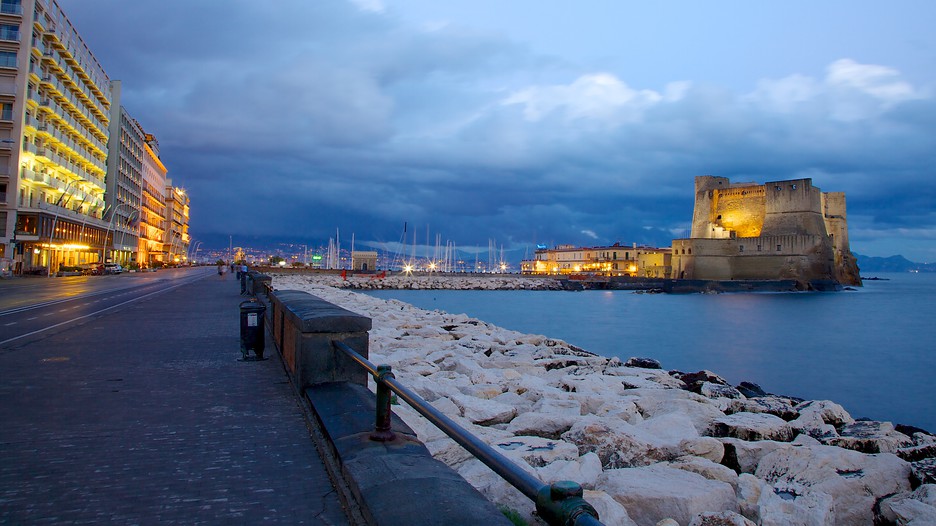 Lying under a blue sky merged with the color of the sea, the gulf of Naples represents a picturesque postcard scenary. It gives enchanting atmosphere to be framed in a photograph.

Walking along the seafront in the direction of Castel dell'Ovo, going into the Borgo Marinari and reaching the summit of the castle, is a pleasant way to see one of the most beautiful views of the gulf of Naples. A magical and fairy-tale atmosphere, cheered by the breeze and the surrounding marine landscape, where stands out the impressive Vesuvius. 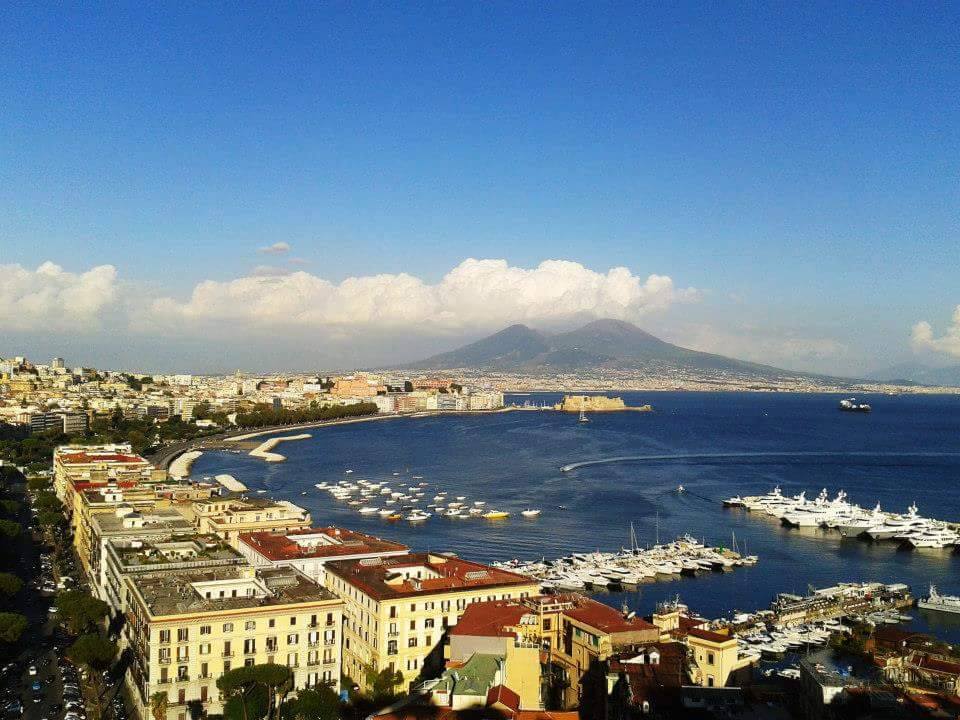 Another breathtaking panorama that frames the gulf of Naples is admirable along a curviline road that goes down from the Vomero hill to Chiaia Riviera, crossing Via Aniello Falcone. Madre Teresa di Calcutta slag shows the most picturesque view, especially at sunset.

In Posillipo, in front of the Church of Sant'Antonio, there is a charming terrace suspended between sky and sea, revealing to anyone's eyes a dreamy panorama. The protagonist is once again the Vesuvius, on the background of the gulf of Naples. It is also possible to look at Castel dell'Ovo, the refined buildings of the Chiaia Riviera, the Vomero hill and Castel Sant'Elmo. 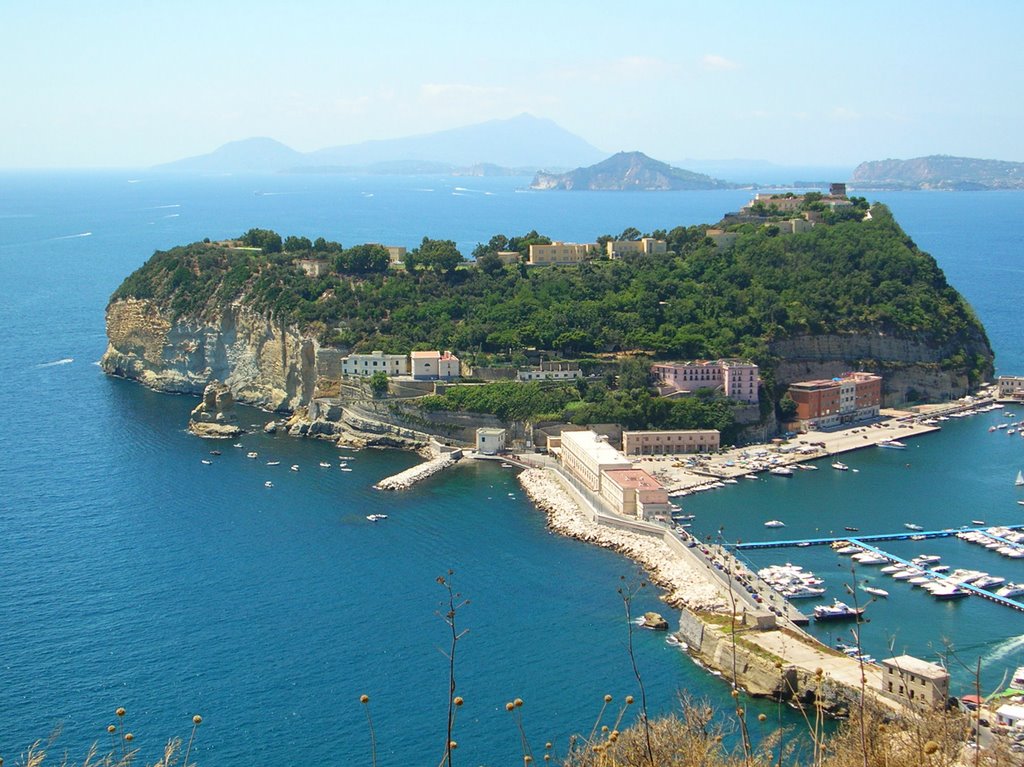 Overlooking the sea, on the promontory of Posillipo, rises the Parco Virgiliano, with its suggestive terraces looking out the gulf of Naples. The park offers several panoramic views over: the historic centre, the Caracciolo seafront, the Vesuvius, the three islands, the Sorrento Peninsula and the Phlegrean area. One of the most beautiful and extensive terrace is the one facing the island of Nisida. From any point of the park you can see the steep walls of tuff that, descending towards the sea, reveal a stunning coastal landscape, enriched by the Trentaremi Bay and the Parco Sommerso della Gaiola.

Places to visit in the gulf of Naples

The gulf of Naples is a jewel whose glare is known all over the world. Its uniqueness is the result of a mix of artistic, historical and natural beauties, in combination with a mild climate and an inviting culinary art. Traveler can experience a rich and varied experience, with a wide range of choices ranging from the wellness of the thermal baths of Ischia and the Phlegrean coast, the charm of the many archaeological sites of the whole area, the beauty of the Gaiola sea and the Parco Sommerso of Baia, the glamour of Capri, the richness of the monuments of Naples, the awesomeness of the natural parks of Vesuvius and Astroni, and the elegance of Sorrento and Vico Equense. Following some unmissable places. 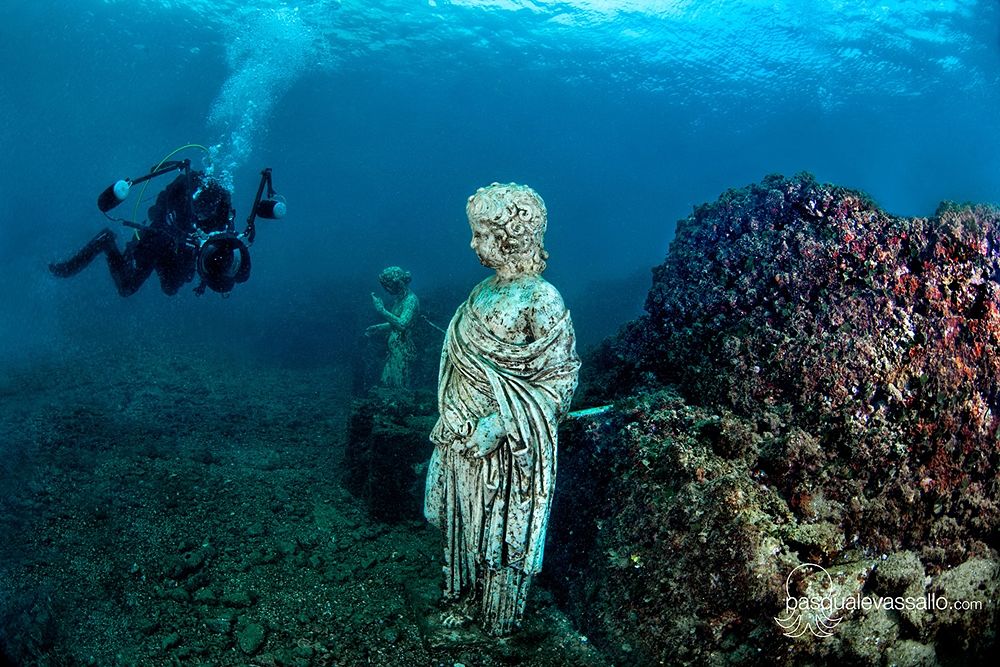 The Parco sommerso of Baia can be explored on glass-bottom boats departing from Baia Harbor, or you can do snorkeling or diving by Lucrino. A well preserved Roman "Atlantis" reveals its precious and hidden finds: road maps, statues, shops and patrician villas once faced the renowned seaside and termal resort. 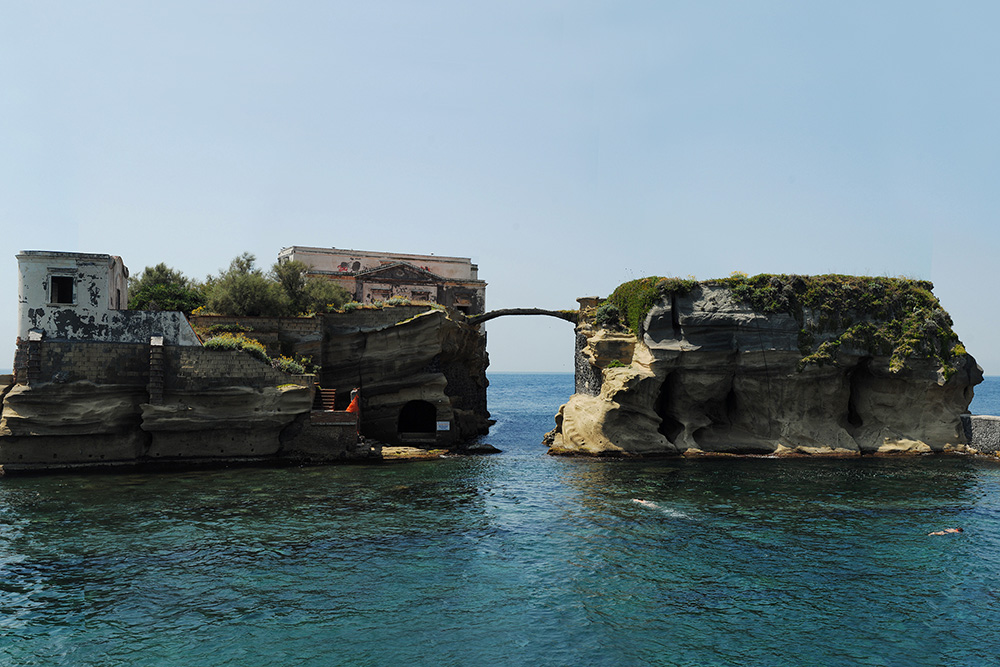 The Parco sommerso of Gaiola, hidden treasure of the gulf of Naples, is a protected marine area that can be reached by taking the bus from Mergellina and getting off the Descent Coroglio stop. It is a real glimpse of paradise visitable through sightseeing tours with underwater sightseeing, snorkeling and diving routes. The backdrops of the park lead to the discovery of the finds of ports, water lilies and ponds, overwhelmed because of bradyism. The landscape is also dominated by the mysterious Imperial Villa of Pausilypon, now part of the Archaeological Park of Posillipo. 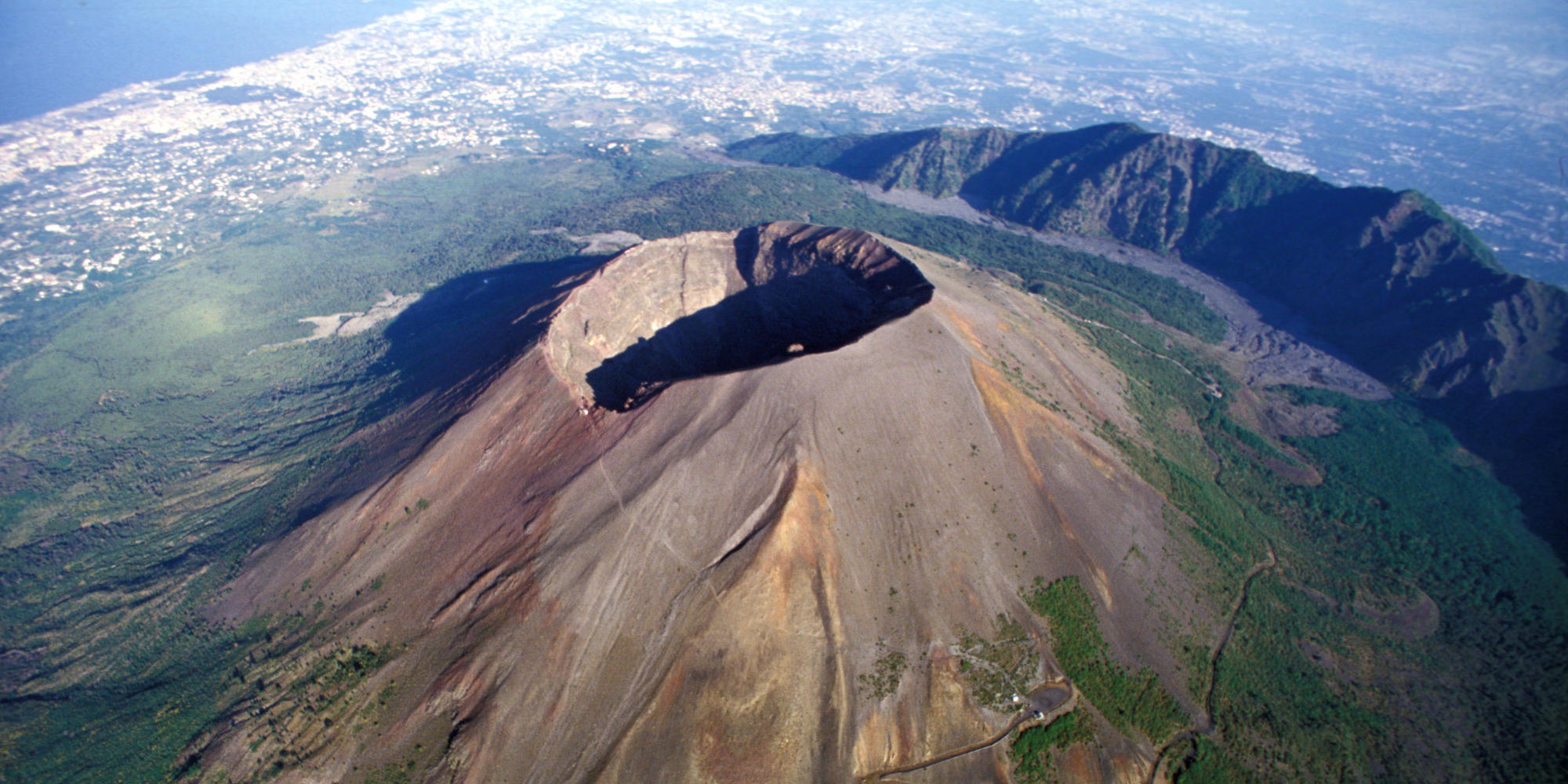 The Vesuvius National Park is a site of remarkable geological and historical interest, rich in natural beauty and agricultural production. It offers the opportunity to explore varied paths with breathtaking views: natural, scenic, educational and agricultural. You can reach the Park with the Circumvesuviana Railway (Napoli-Torre Annunziata, Napoli-Sorrento, Napoli-Poggiomarino-Sarno, Napoli-Ottaviano-Sarno).

The islands of Procida, Ischia and Capri The sea and relax lovers, who don't want to lost a cultural and wordly holiday too, will find unmissable to visit the wonderful islands of the gulf of Naples, perhaps in a long weekend. Boat connections from the port of Naples and from Pozzuoli to all islands are secured at various times of the day.

Procida is the smallest island in the Campania archipelago, chosen as a movie set of true masterpieces. Here we find two beaches that deserve to be visited: the beach of Pozzo Vecchio is protagonist in some scenes of the film "Il Postino", and the beach of Chiaiolella, the most frequented in the island. You can also visit alleys and churches of historical interest, in particular the Abbey of San Michele Arcangelo, which rises on the promontory of Terra Murata, overlooking the sea. 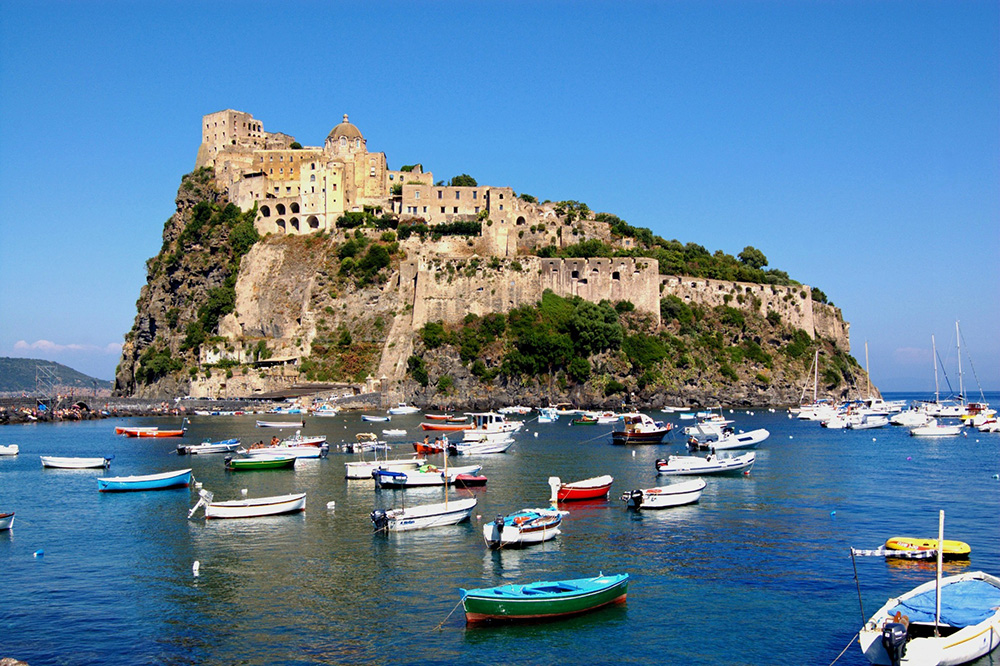 Ischia is the largest island in Campania, appreciated all over the world for its spa and health resorts. Its charming historic center, Ischia Ponte, has many ancient shops. Here there is also the most visited monument of the island, the Aragonese castle, built in 474 BC. by the tyrant Geron of Siracusa. Instead, Ischia Porto, the small fishing village, attracts tourists with wordly nightclubs. Capri, a destination chosen by poets and writers since ancient times, has its core point in the famous and romantic Piazzetta. It is advisible to visit also the charming gardens of Augusto and Villa Jovis, one of the most famous flowering villas. It is an amazing panoramic residence owned by Emperor Tiberius. The famous Blue Grotto of Anacapri and the peaks of the Faraglioni that rise from the sea, give diving spots in clear and spectacular waters.

Sorrento Peninsula offers incredible scenic scenery, where sea and mountain alternate not far from loud and lively urban centers. To reach its resorts you have to take the Circumvesuviana or the bus from Piazza Garibaldi. 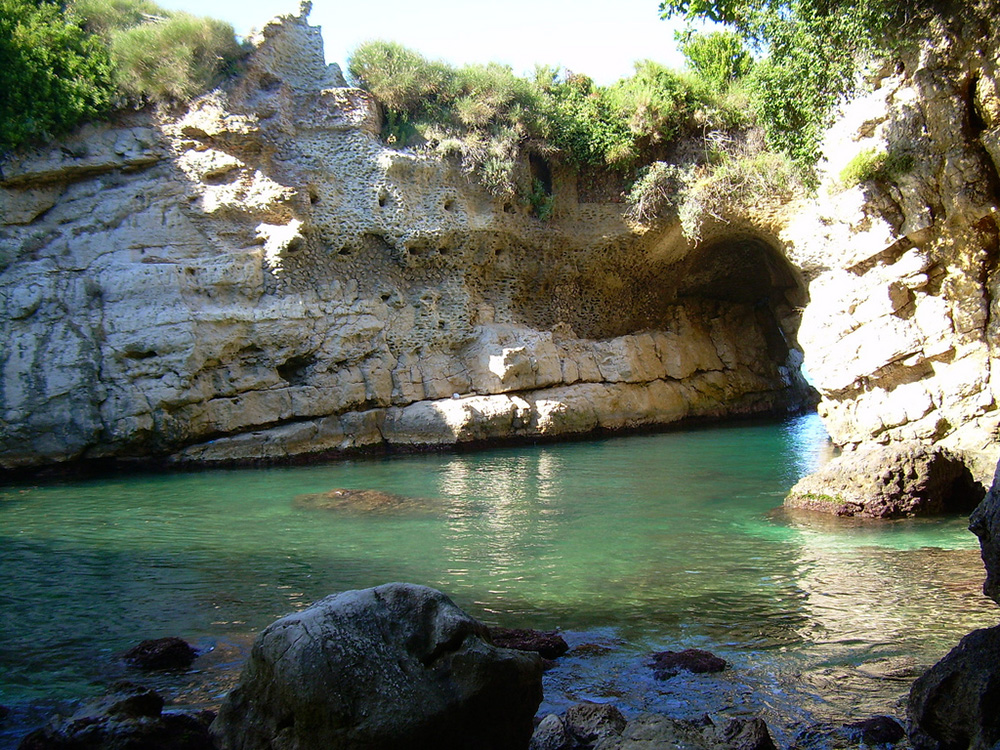 Sorrento is a must for tourists who appreciate characteristic alleyways with craft shops and laboratories producing the famous limoncello, the typical liqueur of these areas. A tip is to explore a real corner of paradise: the bagni della Regina Giovanna, a jewel embedded between the rocks, the clear sea and the verdant nature. To get to this enchanting place you must first arrive to Capo di Sorrento and then take the bus. Vico Equense, like Sorrento, offers not only crystal clear sea and relaxing spas. Among the natural attractions is worth visiting Monte Faito, a spectacular panoramic spot on the gulf of Naples, reachable by cable car or a well-marked path. Among the tasty festival that enrich the culinary tradition of the destination, the most famous is the one of the "pacchianelle", which features traditional costumes and exhibitions of typical products: oil, nuts, limoncello, salami and cheeses.

The blue and mild sea, the lush vegetation and the spectacular coastlines are not the only elements that you can enjoy in the rich gulf of Naples. Cultural contents also deserve an important role in the discovery of this varied and fascinating territory.
There are many "pearls" of art and architecture that can be admired, for example, in the unique historic center of Naples, rich in monuments and places of interest, declared a World Heritage Site by UNESCO in 1995. A recommended itinerary is the one that starts from the National Archaeological Museum and ends in Piazza San Domenico Maggiore. It offers libraries, artisan and antique shops, pizzerias, magnificent churches and illustrious palaces, lively and renowned streets and squares.

Naples is a magical resort, forged by ancient traditions, myths and legends that derive from a millennial history of unique and rich folk culture.

September 19 marks the feast of San Gennaro. In this day recalls the martyrdom of the saint and people hope in the prodigy. The evocative ceremony takes shape in the Duomo, where faithful wait for the blood liquefaction. The blood is kept in two small glass balsams dating back to the first decades of the 4th century.

In the scenic street of San Gregorio Armeno (in the historic center of Naples) there is a surprising exposition of the famous and original Neapolitan cribs, real piece of art. Among the various settings we find the tavern, the market, the craft shops. Among the pastors realized stand out, apart from the traditional ones, we also find characters in vogue from the world of entertainment.

In the same way, but not only here, you can find another symbol of folklore and Neapolitan superstition: the lucky red horn. It represents the emblem of life and fertility but it brings luck only if you receive it as a gift.
Seguici sulla nostra
pagina Facebook