Miguel de Cervantes, William Shakespeare and Garcilaso de la Vega are universally recognised as pillars of culture, poetry and literature. All three passed away on 23 April 1616. It is, therefore, no coincidence that this date, 23 April, has been chosen to celebrate World Book and Copyright Day. The annual event, established by UNESCO in 1996, promotes the pleasure of reading as a form of entertainment and learning.

To celebrate World Book Day, we are taking you through the streets of Naples with seven exceptional guides: seven authors for seven novels to let you experience Naples through a different lens. The result is a kaleidoscope of scents, flavours and sensations that partly restore the sense of a city that is difficult to capture in words.

God's Mountain is the title and background of a novel set in a historic Neapolitan district, Monte di Dio, one of the oldest in the city. Erri De Luca is an outspoken and "material" author with a dense and synaesthetic style. Try to read any of his books, and you'll immediately have the feeling of truly being in the midst of mountain nature, savouring the sea air of Ischia or walking through the alleys of Naples. God's Mountain will give you the same vivid impressions.

It is the story of a thirteen-year-old boy and his initiation to life. To help him on this growth journey are Mast'Errico, the owner of the carpentry workshop where he sweeps the floor, and Rafaniello, a cobbler who will help him think about men and life. And two special objects: a reel of paper and a boomerang…

6. The Temptation to Be Happy, Lorenzo Marone

Ironic, gruff and selfish, Cesare Annunziata is the irresistible protagonist of The Temptation to Be Happy by Neapolitan author Lorenzo Marone. Through his disenchanted eyes, you see a lively, contemporary Naples. The seventy-seven-year-old widower spends his days sipping wine with his neighbour, reluctantly chatting with the cat lady next door and having passionate encounters with Rossana.

The arrival of mysterious new tenants upsets his routine and highlights the paradoxes of his complex soul, poised between cynicism and profound tenderness. The novel was the basis for the 2017 film Tenderness by Oscar-nominated director Gianni Amelio. 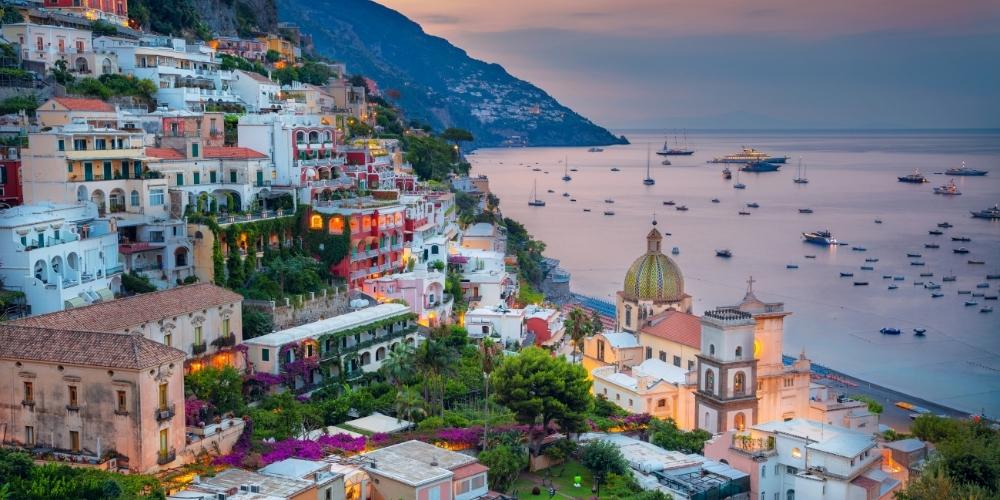 Patricia Highsmith drew inspiration from the Mediterranean atmosphere of Positano to create the imaginary Mongibello of her The Talented Mr. Ripley. Not exactly a book set in Naples, but Campania is a protagonist in this dark psychological thriller and its successful 1999 film adaptation starring Matt Damon and Gwyneth Paltrow (in the movie Procida and Ischia lend their features to Mogibello).

Young Tom Ripley is hired to track down the scion of a wealthy family of nautical entrepreneurs, Dickie Greenleaf, who has moved to Italy to an idyllic village not far from Naples. With breathtaking scenery and twists and turns, Highsmith constructs a perverse game of manipulation, lies and madness set in paradise.

This funny autobiographical book by writer/actress Catherine Wilson is a love letter to the city and a delightful read to take with you on the beach.

Fresh from her degree at Princeton University, American-born Katherine comes to Naples for an internship at the U.S. consulate. She will fall for Salvatore and her mother-in-law's cuisine. A warm and witty book in which food is a delicious excuse to talk about life, passion and the culture that connects—bonus track: traditional Neapolitan recipes by Mrs Raffaella (the mother in law).

This literary phenomenon is set in Naples for most of its four books, My Brilliant Friend and the subsequent The Story of a New Name, Those Who Leave and Those Who Stay and Story of the Lost Child. We know that the novels of the fictitious Elena Ferrante need no introduction, but if you need a little refresher (perhaps before a trip to Naples and a tour in the footsteps of the books and TV series), here are the essentials to know.

The story of the protagonists Lenù and Lila unfolds in a tale of friendship, growth and redemption over six decades, starting in the 1950s. Although the author does not often mention precise places, some are easily guessed from the descriptions: Rione Luzzatti, the suburb of Naples where the friends spent their childhood, Piazza dei Martiri, the Mergellina seafront, Via Caracciolo, Port'Alba, Via Toledo and the Galleria Umberto I.

In The Skin (La Pelle), Curzio Malaparte offers a portrait of obscenity and beauty amidst the squalor of the streets of the ruined 1943 city and the desperation of the people who do everything possible to save their skin.

A raw and cutting account of Naples the day after the arrival of the Allied forces, a story of defeat, suffering, hope and freedom. Not an easy read but an unmissable masterpiece to better understand and complete the elusive mosaic of Naples.

Thus Spake Bellavista (Così parlò Bellavista) is a little classic of Neapolitan literature. Luciano De Crescenzo's first work is an explosion of unmistakably Neapolitan sagacity, wisdom and irony, a balm for the soul, almost a medicine to chase away sadness and melancholy. Our dispassionate advice is to keep a copy on your bookshelf: it is a reading that makes you happy.

Thus Spake Bellavista is a colourful and warm cross-section of Naples and Neapolitans, with a narrative that combines humour and philosophy, De Crescenzo's trademark. Let yourself be captivated by Professor Bellavista's hypnotising teachings and discover whether you are people of love or freedom.

Why we celebrate World Book Day on 23 April

After delving into our literary itinerary through the streets of Naples, let's make one last detour, this time across the border. We take you to Spain for a moment to tell you about the romantic and fascinating tradition enlivening Sant Jordi's Day. On 23 April, lovers are used to exchanging roses (symbol of St George) and books.

While flowers refer to the dragon of the legend and the rose garden that is said to have been born from the beast's blood, what do books have to do with Catalonia's patron saint? The custom dates back to the 1930s when Spanish Book Day, established by King Alfonso XIII, started to be celebrated on 23 April, the feast of Sant Jordi. This tradition is also behind the proclamation of the UNESCO World Book Day.