In Naples there is a place where the ancient poor cooking and the job of telling life stories form a perfect union: it is the restaurant La Casa di Ninetta - Neapolitan interior, by Carmine and Lina Sastri.

This little temple of Neapolitan after-theater is a center of gravity in the artistic world and cultural gathering of Naples with its intellectual appointments in the name of taste, art and beauty.

Perfect to live in two, thanks to the amarcord atmosphere, the restaurant offers romantic encounters where culture and taste are the protagonists. In the theme nights, Neapolitan opera music of the 18th century is combined with tastings of traditional dishes, which represent the collective memory of the ancient Partenope.

The recipes draw on the great tradition of poor cooking: here you can taste dishes such as A'Genovese with hand-broken Ziti, among the best in town, or delicacy such as Potato and smoked mozzarella pasta, paccheri c'o Raù (typical pasta with neapolitan gravy) or typical fries, majesty the cod, main specialties of the house.

Born in 2010, the restaurant has an important mission: to transmit the ancient flavors. Each element inside tells stories related to the Neapolitan Belle époque, the identity of the place, but also events of a family, the Sastri, which has always been divided between kitchen, theater and recipes handed down for generations.

"My mother Anna, called Ninetta, was a beautiful and extraordinary woman who left us a few years ago" remember the famous actress Lina Sastri: "she cooked in a fantastic way and her dishes and that perfume of home that today my brother Carmine proposes again in Ninetta's house". The soul of the restaurant is Carmelo Sastri who instructs the staff to deliver the flavors of his childhood to the customers. The recipes, inherited from grandmother Emilia and mother Ninetta, hold the secrets of Neapolitan cuisine, as he explains: "I lived a lot of time abroad and I remember that every time I came back to Naples it was difficult to find a restaurant where you could taste the cuisine historical of my city, the one made at home in earthenware pots. So I decided to start what for me is much more than a mere business, proposing to offer a home cooking and, together with my sister Lina, give an artistic touch to the place ".

A place where, thanks to the atmosphere of an antique style, the well-kept and warm furniture, with classic scents that bring us back to Sunday lunches, you really feel at home. Ninetta's house is a borbonic location, where every element, from furniture to books, has been chosen with love and which, thanks to its rétro atmosphere, tells the story of a city through the dishes that are symbols of the Neapolitan tradition.

Closed for lunch from Monday to Friday; variable holidays 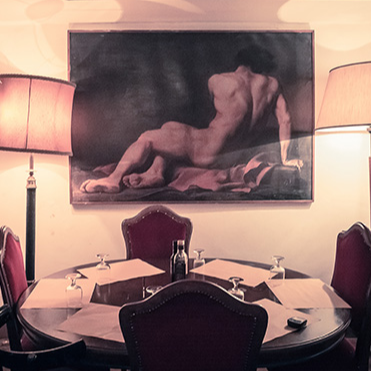