Neapolitan history through the history of Pizza Margherita

The history of a pizza Marghertita is more than a recipe and much more than one of the best dishes in the world. It combines world history, Neapolitan creativity and relationship with foreigners.

Now the first thing that you have to know- pizza is NOT Italian, it’s Neapolitan. And don’t even try to say “Italian pizza” at least while a Neapolitan is listening, because you’re going to hear a big moral and history lecture that never ends. So, just don’t.

The Neapolitan relationship with foreign countries was always friendly. Here are living many foreigners since always, coming from the furthest places on earth. After asking where are you coming from, your name, the third question is always “what do you eat in your country?”. And even if Neapolitans won’t remember the country you’re coming from or mix up your name every time, they will remember which things you are eating.

The Neapolitans brought many things from other countries into their own culture. And now I’m going to show you one very simple example – pizza.

Did you ever think what the word pizza means? Where is it coming from?

It’s not enough to reply: pizza is round, coming from Italy (wrong!), and you can eat it with cheese, tomatoes and pineapples (very very wrong!). Actually, pizza Margherita has a very easy recipe: it’s simple dough base, tomatoes, mozzarella, basil and a bit of olive oil; but under this recipe hides a very beautiful Neapolitan history.

The word pizza is coming from Arabic “pita”, which means bread. The original Arab bread is big and round, made of simple water and flour dough, then baked in the oven. Already from many years ago in Naples were living many foreigners which were coming from Arabic countries too. And of course, they were baking their bread, this way making Neapolitans very nosy what is that thing that these foreigners are eating. So, this pita is the ground for the pizza.

Now, what about the toppings? Let’s start from mozzarella. The real mozzarella is coming from buffalo milk. And actually, it’s called buffalo mozzarella (mozzarella di bufala). But buffalo origins are not Neapolitan, they’re Indian animals brought by Normans to Naples in order to do hard physical assignments: work in constructions, farms and etc. This species fit in here so well that the number of buffalo was increasing quickly. And later on, the wonderful buffalo milk production was discovered.

Another very important ingredient is a tomato. Tomatoes origins are coming from the Central and South America, brought in Europe after the discovery of America. The funny thing is that at the beginning it was thought that tomatoes are poisonous, they were only kept in gardens as exotic plants, not even the locals were eating them. The first common tomatoes were yellow and round -  no wonder that Italians called them “pomo d'oro” (golden apple). And just guess the place where the tomatoes were eaten for the first time. Naples, of course! In that period Naples was suffering from the big starvation. And apparently, the hunger can be a cause for creativity. Now all the Campania region is famous for its tomatoes.

So, the Neapolitan pizza Margherita is made thanks to Arab, Indian and American ingredients adding some native basil and the extra virgin olive oil whose recipe is coming from the Mediterranean part. But why is it called Margherita then? 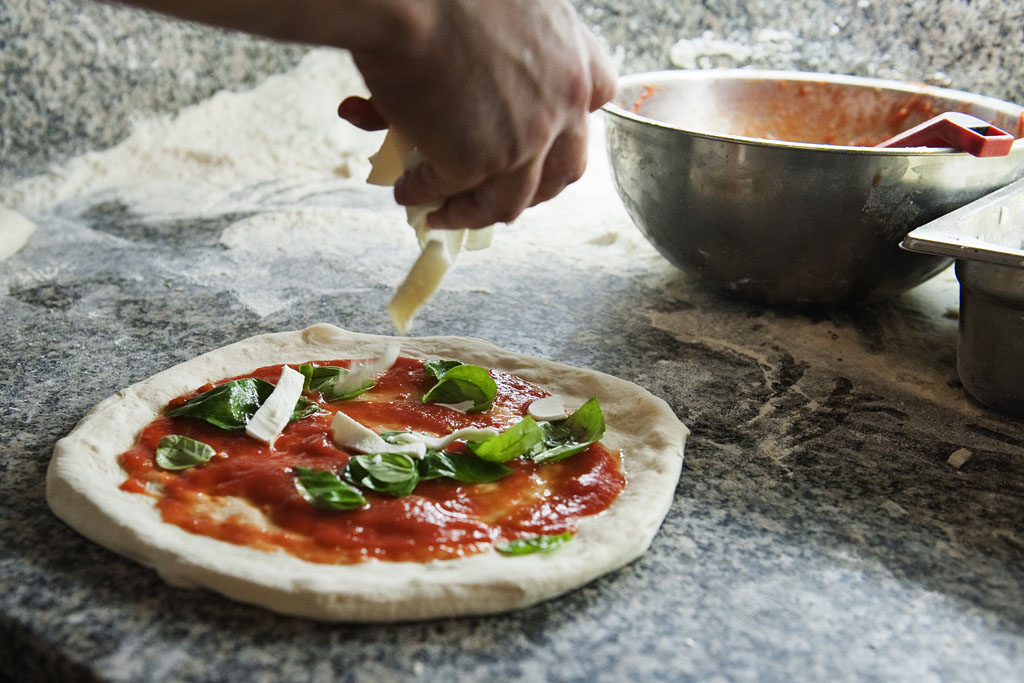 The story tells two versions. And I think both of them are completely right. One of the stories says that pizza Margherita was called so to honor the Italian Queen Margherita di Savoia right after the unification of Italy. It’s said that the ingredients used to make the pizza: basil, mozzarella and tomatoes are the colors that inspired the Italian flag. But before the pizza Margherita was given as a present to the Queen, there were already many variations of pizza in Naples and it’s thought that maybe pizza Margherita already existed: on the pizza pad and tomato background, from thinly sliced mozzarella pieces and basil a form of a daisy flower was made. And Margherita translated from the Italian language means daisy.

One of the biggest attractions in Naples is to eat the real pizza Margherita. You can eat it in every pizzeria of Naples, I can assure you that any pizzeria you will choose is going to be very different from any kind of pizza that you ate before. The ancient pizzerias with the best pizza in Naples are offering the Pizza Margherita for a ridiculous from 3 to 5 euro price! I’m not kidding!