Chistmas is near. If you are in Naples, you can try the next Neapolitan desserts.

What are the struffoli?

The struffoli are little deep-fried dought pebbles with honey and they are present in most of the culinary culture of southern Italy, though with different names. It is said that struffoli were brought by the Greek, at the time of colonization of the South. The use of honey which was mostly used in Greek desserts, strengthens this teory. The word "struffolo" derives fron Greek: precisely from the word "strongoulos", that is "rounded". The struffoli are really delicious, one pebbles pulls the other. It would be a pity to lose it!

How is pastiera born? Pastiera is a typical cake of  Christmas period (but also and especially Easter). Legend tells that, one night the fishermen’s wives left on the beach some baskets with ricotta, wheat, eggs, candied fruit and orange blossoms. The women wanted to homage the Sea for their husbands to go back to their homes and keep them safe. In the morning, the women were surprised when they discovered that waves had mixed all the ingredients together: the baskets were empty and there was only a cake, the pastiera. Apart from legend, we know that the pastiera was born in a monastery, most probably a dessert like it was already present in the pagan culture, to accompany the rites for the return of spring: infact, pastiera is made with eggs and wheat, symbols of rebirth and harvest. Today the Pastiera has become a typical dessert, representative of Neapolitan culture, and it is easy to find it at the table at any occasion of celebration. Many prestigious Neapolitan pastry shops, such as the historic Caffè Gambrinus, offer their own version of this typical dessert which has spread to such an extent that today it is also possible to buy pastiera online and send it to relatives and friends, perhaps as a Christmas present. 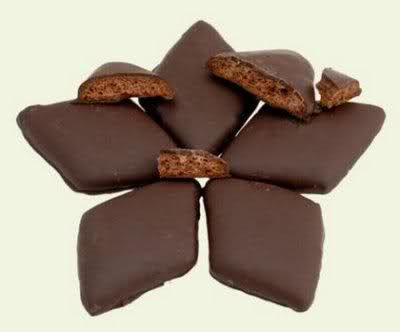 The name of mustaccioli derives from the word "mustacchi", which described the long and thick moustache of nobles. The mustaccioli are diamond shape biscuits, entirely coated by a dark chocolate glaze. Today, there is also a version in white chocolate, orange and helznut chocolate. And, we have soft or hard mustaccioli. And what you prefer?

Neapolitan roccocò are baked in the oven and they are made with almonds and a lot of spices, for example cinnamon, pepper, nutmeg and honey. The first recipe goes back to 1320, and the sisters of the Real Convento della Maddalena made them for the first time. Probably, the name comes from the French "rocaille", because it looked like a round shell. The Neapolitan ladies know well that it isn't easy to made roccocò: the dough must be crisp but not hard outside and soft inside. Ready to taste them?