Bread loaves found in the excavations of Pompeii

Everyone knows Pompeii, the Roman city on the slopes of Vesuvius, that in 79 A.C. was completely submerged by the lava. Every day from its excavations, we discover new ruins and pieces of the Roman Empire's ancient civilization.

Among its remains buried by ashes and pumice, the archaeologists have found a hoven full of charred but intact loaves in what used to be a bakery in Pompeii. A kind of loaf known as Panis Quadratus: it used to be round and divided into eight segments of equal size.

Maybe the name comes from its four lines used to create the eight sections on the surface: quadratus means with four lines. Panis quadratus used also to have another peculiarity: a horizontal line, along its circumference, of whom but little is known otherwise, from the reason for which it was been made. 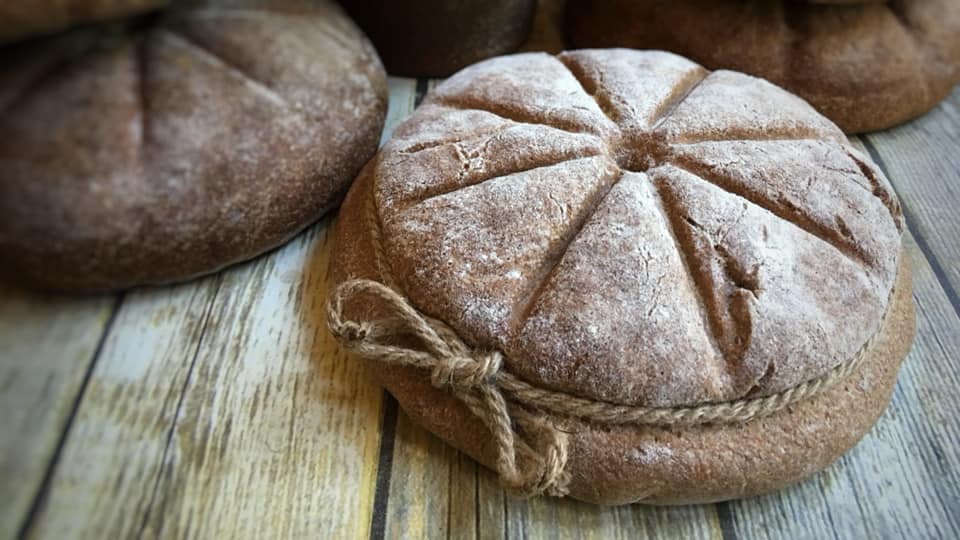 The bread was one of the bases of the Ancient Roman diet, based on the so-called Mediterranean triad: cereals (bread), olives (olive oil) and grapes (wine). Just in Pompeii, there were about 30 bakeries that produced huge quantities of bread every day.

During ancient Rome, wheat wasn't yet the favourite ingredient for making bread. The bread used to be made with flours from grains no longer used, such as Triticum Silicum or Triticum Dicoccum.

The bread used to be a rich food that rarely there was on the poor tables, where usually there were soups and porridge. In the beginning, making bread was a woman's duty or cooker's in the rich families: the baker job appeared during the III century A.C., as shown by the play Asinaria by Plautus.

In ancient Rome, there were different qualities of bread: from every grain a different kind of bread. The difference is not only in the flavour: every bread used to be made on a different day of the week.

• On Monday Panis Farreus: was made with Triticum Dicoccum's flour, today a rarely cultivated grain and mainly used to extract spelt;

• On Tuesday Panis Nauticus: also known as sailors bread, because of its makeup it was adapted to preserve itself during the long journeys;

• On Wednesday Panis Quadratus: founded in Pompeii's bakeries and that means that the day of the eruption was on Wednesday;

• On Thursday Panis Adipatus: looks like a white pizza with a dough enriched with pieces of bacon or pancetta;

• On Friday Panis Militaris (soldiers bread): during the III century A.C. existed two types: the Mundus that was made in the city and distributed to the troops when they were in barracks; and the Castrensis that was used in the camps during the military campaigns. As the Panis Nauticus, it used to preserve itself for long periods;

• In the end, on Saturday the production finished with Panis Siligeneo Flore: a white bread made with Triticum Silicum's flour (soft wheat). It used to be considered the best bread that could be founded on the market (it was the favourite of Pliny the Elder).

Farrell Monaco's research into the bread of Pompeii

Farrell Monaco is a culinary archaeologist and has been the first one to deal with these loaves founded into Pompeii ruins and to study their consistency. She tried to re-make the recipe and the bread-making process. Monaco started her research by studying the old food's frescos and writing, and after she took action re-making the steps and ingredients.

For the bread's recipe, she relied on the frescos and paintings of Pompeii's walls and amphoras. But in particular, from the Xenia by Philostratus, she has understood that in the bread's dough there are poppy seed, fennel and parsley.

After this and other studies on the frescos housed at the Museo Archeologico Nazionale di Napoli, Farrell has made herself the recipe. In the process, she used the Popidius, a bread starter that was involved in the bakeries at Pompeii and her trusty manual hand-mill that processes cereal grain.

The particularity of Panis quadratus, visible also in many old frescos, is its decoration: Farrell speculated that the Roman bakers used to mark its upper side before baking it with a blunt linear tool to demarcate the loaf into eight sections. In this way, even if not cut, the bread was already divided into segments.

The reasons for this use could be two: it was easier to share it with other diners (a kind of "friendship bread") and was easier to cut a slice too.