Vico Equense: the home of the Pizza a Metro tradition

Vico Equense: the largest municipality on the Sorrento peninsula

Vico Equense is a town in Campania located at the beginning of the Sorrento Peninsula, between the Gulf of Naples, the Gulf of Salerno and the Lattari mountains. It's a municipality that takes on the name of Metropolitan City, whose title of City was assigned by Decree of the President of the Republic. The title of city, as an honour, can only be conferred on certain municipalities, those awarded by a decree of the King, this happened until 1946; Decree of the Provisional Head of State, until 1948; by decree of the President of the Republic. This happens when a municipality takes on particular importance from a historical, artistic, cultural, civic and demographic point of view.

Vico Equense is the bigger municipality of the entire Sorrento Peninsula. It stands on a block of tuff and limestone, at a height of about 90 metres above sea level. It overlooks the Tyrrhenian Sea, towards the southern part of the Gulf of Naples, right at the beginning of the Sorrento Peninsula, ending at an altitude of 1,444 metres at the highest part of the town: the peak of Monte Sant'Angelo. Vico Equense is also bathed by the waters of the Gulf of Salerno, along the course of the Amalfi Coast.

The history of the origins of Vico Equense

Vico Equense is one of the most beautiful and characteristic towns of the entire Sorrento Peninsula. Immersed in nature, bathed by the sea and rich in tradition and culture. There is so much to see and discover, especially considering the origins of the town, which date back to the 7th century b.C. Vico Equense is mentioned in a writing by Silio Italico, in the poem Punica. A poem dating back to the first century b.C.

The town had a flourishing life during the Medieval period. When the Aragonese and the Angevins arrived, the old town came back to life, especially with the depopulation of Aegua and the construction of the walls, inside which the cathedral and the castle were then built. The great development that definitively consecrated the town, arrived in the 19th century, when there was a total urban reorganization, which saw the demolition of the walls and the construction of the road connecting Castellammare di Stabia to Sorrento. The strong tourist vocation of the town began, especially during the summer period, both as a seaside and thermal place, thanks to the presence of the Scrajo thermal complex.

If there is a universal dish, it is not the hamburger but the pizza, because it is limited to a common base - the dough - on which everyone can arrange, organise and express their difference.
Jacques Attali 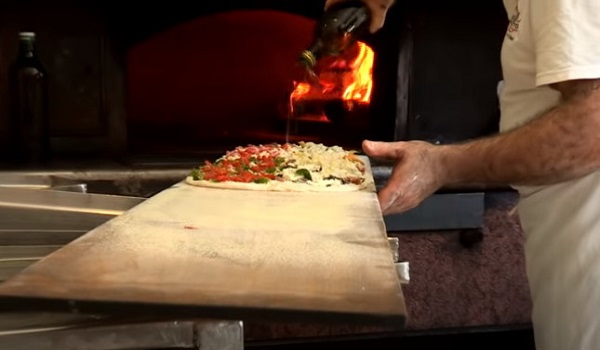 When one speaks of the town of Vico Equense, the mind is projected directly to one thought: the Pizza a metro, a speciality of the house. The Pizza a metro, a pizza up to 2 metres long, is topped with different ingredients, which can vary according to customers' tastes. It is served on a long pan which is transported to the table on trolleys. One metre of pizza is a delicacy that deserves to be enjoyed at least once in a lifetime. This is why many tourists, both Italian and foreign, visit the town of Vico Equense to taste this local speciality.

The whole process of making Pizza a metro follows the traditional canons of Neapolitan pizza preparation but differs in the way it is topped and baked. The father creator of this delicacy is Luigi Dell'Amura, also called Gigino.

The birth and characteristics of Pizza a metro The Pizza a metro was born out of the need to satisfy several people at the same time through a shareable meal. In this way, the demands of several people can be satisfied with a single pizza, instead of making many. You save money and time by serving a pizza with several different toppings and different flavours on one long pan. Instead of making four different pizzas for four people, you can bake a single one-metre of pizza but with different ingredients, satisfying several requests at once. Thanks to this invention, Luigi Dell'Amura became famous and well known in the Sorrento Peninsula and throughout Italy, so much so that the original recipe became a cult, later repeated by many other pizza makers. The recipe was perfected and patented in the 1960s and then repeated. The dough for Pizza a metro is made from a mix of different, refined flours. The size of a Pizza a metro, totally different from the classic round pizza, can measure from a minimum of 30 centimetres to 2 metres, to be precise: 180 centimetres! The ingredients can be laid on the pizza forming portions that can be divided according to the customer's taste. The only big difference between Pizza a metro and the classic round pizza we all know is the rising time of the dough, which in the case of pizza a metro is 6-8 hours, compared to 12 for round pizza.

CLICK HERE TO HAVE FURTHER INFO ABOUT VICO EQUENSE ❯