Wines of Naples and Campania: tips for the Neapolitan wine world

The importance of wine in Neapolitan cuisine: the Campania's grape

In its vast and content territory, Campania contains over one hundred species of grapes, which even exceeds the number of varieties, which has one of the world famous wine producers, the whole France.

Every year innumerable varieties of wines are produced on Campania soil, for a number equal to the 1500 labels that are distributed all over the world. From the slopes of Vesuvius to the hills of Vomero, from the Phlegraean fields to Caserta until the Sannio, the Irpinia, the islands and Sorrento peninsula, all these territories have decided to be due to grapes of their native lands to guarantee taste, tradition and originality.

Naples... and the wine: the vineyards of Campania 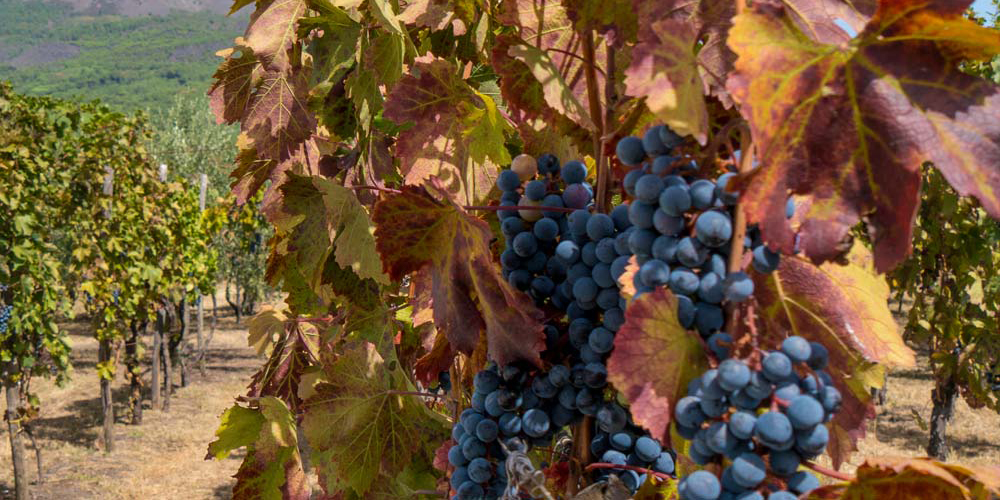 The lands around Naples preserve and produce some of the most ancient and inimitable vineyards. The Neapolitan wine tradition has very ancient origins; from the Greeks to the Romans to the present day, these lands have given birth to one of the most famous and tasty wines in Italy.

The secret of this success is not due, only to the earth, tufaceous and volcanic, that does not need to be watered copiously, thanks to its porosity  and the underground release of humidity, but also to the constancy of the winemakers to preserve from the tradition, the name, and also the original techniques and ingredients in the production of their nectar.

Thanks to the wise minds of the peasants of these lands, remained faithful to the grapes of the territory: piedirosso, aglianico, falanghina, greco, coda di volpe, biancolella, etc., that for centuries Naples has been one of the most famous cities on the production of local wine.

Let's find out which are the most famous wines locally to taste in the territories of Campania.

Tips on the best wines in the shadow of Vesuvius: Aglianico, Piedirosso, and Caprettone

there are from Aglianico, one of the last to bear fruit under Vesuvius, from its elegant and refined taste, with its supporting element the Piedirosso, more acid and rich in minerals, which are among the most famous black grapes spread throughout the territory , followed by the lesser known Olivella, a vine characterized by the bitter and not very fruity taste, to those with white grapes, such as the Coda di Volpe, known as a Caprettone on the territory for its pointed shape, famous for its freshness and its inimitable softness, or like Falanghina, much more acid and full-bodied.

From these vineyards are born fine wines, which are requested all over the world, such as: Falanghina del Sannio, Fiano, Greco di Tufo, Aglianico del Taburno, Lacryma Christi, etc., all vary in intensity of flavors and colors, based on the region in which they were produced.

The best wines of Naples always at your home: how to do it?

How many flavors our earth offers you, which often makes you miss it even at the table. The flavors are known throughout the world, but if you miss Campania, you can now buy online the wines of Campania even if you are away. In fact one of the leading companies in the sector in Campania, precisely in Trecase, the Cantina del Vesuvio, producers with years of decades of history in the wine making sector, through its website offers the possibility of being able to order wines of own production, even those limited edition, in particular the very famous Lacryma Christi.

And what are you waiting for? Quench your drought with the wines of Campania.