They are the pride of Italian confectionery, and, although for centuries they have been prepared on 19 March in central and southern Italy for Father's Day and Carnival, zeppole di San Giuseppe are still deeply rooted in the Neapolitan tradition. If you haven't tried them yet, then hurry up.

The traditional recipe of the zeppola di San Giuseppe

A few simple ingredients, carefully prepared by skilled pastry chefs with passion and always respecting tradition, are transformed into a delicacy that no one can resist. Water, flour, eggs, butter, milk, sugar, sour cherries in syrup and lots of love... Fried or baked, the zeppola di San Giuseppe is a mouth-watering dessert, authentic excellence of Neapolitan confectionery. A choux pastry encloses a rich, fragrant cream in the hollow part. You will experience a contrast of flavours ranging from the neutrality of the pastry, the sweetness of the filling finely decorated in the form of a curl, and the bitter taste of the sour cherry, which completes the recipe at an aesthetic level.

The official birth certificate of the Zeppole

As is often the case, the origins of the zeppole di San Giuseppe are also debated. It seems that they have been around for a long time and that, in the 15th century, they were the favourite dessert of the Viceroy of Naples, Juan II de Ribagorza. However, this time it would seem that history itself attributes the paternity to Naples. It is no coincidence that Ippolito Cavalcanti, the famous gastronome and man of letters, wrote the first recipe in the Neapolitan language. Officially included in 1837 in his Trattato di Cucina Teorico-Pratica (or Treatise on Theoretical and Practical Cuisine), the zeppola boasts an authentic birth certificate in the following description, which illustrates its preparation step by step.

«Put a saucepan containing half a jug of fresh water and a glass of white wine on the stove. When the first bubbles appear, and it is about to boil, add little by little half a roll (approx. 450 g), or two-thirds of the fine flour, constantly stirring with a rolling pin. The dough will be ready as it comes away from the pan, so you can remove it and place it on the cutting board with a bit of oil. Therefore once it has cooled and is malleable, you can roll it out with your hands if there are lumps of flour. You can make as many small pieces of dough as there are zeppole; then fry them, preferably in oil or lard, taking care not to burn the pan. Then you will stick a small pointed iron into them to empty them from the inside, and finally, you will fill them with sugar and honey. To make the zeppole more tender, making the dough a day in advance is advisable».

A few simple ingredients, including flour, water, aniseed liqueur, marsala or white wine, salt, sugar and oil for frying, are the key elements of the classic recipe, which has been revised over time.

The legend of St Joseph the fried pastry maker

Several legends have been handed down to further envelop the mystery of the origin of this delicacy. One of them places the zeppole in a religious context, namely the famous biblical episode of the flight into Egypt. For reasons of necessity, it is said that St Joseph had to make ends meet by becoming a fried pastry maker or fritter seller. In Naples, street food style fried pastry maker spread, probably in honour of the Saint. During one of his stays at the end of the eighteenth century, the German writer Goethe speaks of zeppole still hot, just fried, in great detail.

«Today was also the feast of St Joseph, the patron saint of all fry-makers, i.e. sellers of fried dough... On the doorsteps of the houses, large frying pans were placed on improvised hearths. One apprentice worked the dough, another handled it and made doughnuts which he threw into the boiling oil, and a third, near the frying pan, used a small spit to pull out the doughnuts as they were cooked and, using another spit, passed them on to a fourth apprentice who offered them to people passing by...».

The Queen of Neapolitan pastry shops and tables 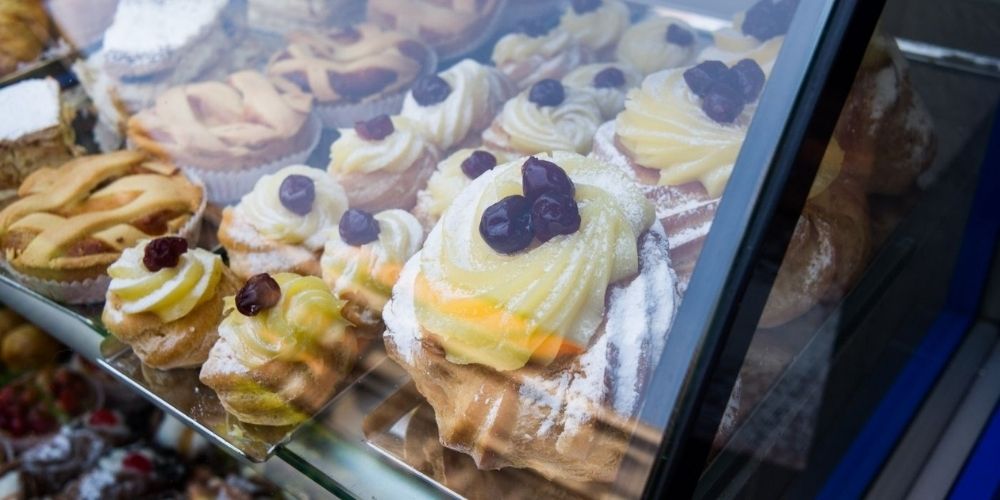 Colourful and superbly assorted shop windows show the zeppole in various sizes, including "extra" family sizes and fried or baked versions. Of course, if you have to try it, you must choose the classic fried version (certainly less dietetic) from one of the many bakeries of the city. The hard part is resisting opening the packet before arriving home and waiting until the fateful moment of dessert, after an interminable and sumptuous meal. As per ritual, the box is stripped by first removing the outer wrapping, then the cardboard bridge that preserves the integrity of the sweets. In the meantime, the aroma invades the table and enchants the diners. Finally, we can bite into the fresh, soft dough and savour a delicate cream in a combination of flavours that is impossible to describe: it just has to be tried.

Although we can find it throughout the rest of the year in pastry shops in Naples, March is the "official" month dedicated to the zeppola di San Giuseppe (or zeppola of Saint Joseph). In fact, this delicious sweet is linked to Father's Day, which is deeply rooted in the Neapolitan tradition. On 19 March, the feast day of St Joseph, father of Jesus and symbol of fatherhood in general, no self-respecting Neapolitan family does not "honour" this figure with gifts, presents and, above all, with the typical cake of this occasion: the zeppola. You won't find a single Neapolitan pastry shop that doesn't offer this delicacy, and that isn't crowded with loyal gourmets competing for it. In wishing everyone a happy St Joseph's Day and Father's Day, remember to pop into the pastry shop to enjoy your zeppola.