Did you know that the Dracula's tomb, the legendary and infamous Conte Vlad III, could reside right in the lively and colourful historic centre of Naples? Some studies in place since 2014 locate it inside the precious Monumental Complex of Santa Maria La Nova. The esoteric and alchemical symbolism present on the fifteenth-century tomb of the Ferillo family, set precisely in the minor cloister of St. Giacomo della Marca, seems to direct the research towards the enigmatic figure of Count Dracula. Wall inscriptions with their encrypted codes, still to be decrypted, overwhelm the mystery and fuel the charm of this place rich in art and religiosity. 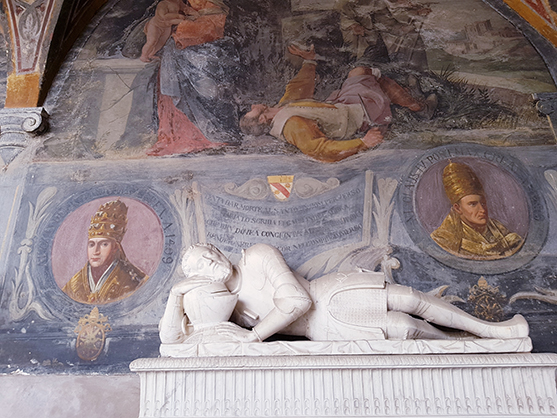 The Church of Santa Maria la Nova is called “Nova” to differentiate it from that of Santa Maria ad Palatium, erected in the place where the Maschio Angioino was later built, occupied by a monastery of minor friars. Charles I of Anjou demolished it to build the castle, giving in exchange to the friars the space where the present church stands, in 1279. Santa Maria la Nova developed in the Gothic style, but the earthquakes and fires that occurred in the following centuries led to a series of remodelling, including that of 1596: after the miraculous healing of a cripple, attributed to Our Lady of Grace, the faithful offered generous offers for new jobs.

Coexistence in the Complex of different styles and sensitivities, linked to the historical requirements and the aesthetic aptitude that inspired them, creates a striking impact that enlivens in the visitors the desire to discovery. You will be attracted by the mystery that lurks over the Dracula's tomb. The church's current  external with two-facades resembles the kind spread to Naples in the sixteenth century. It is preceded by a staircase with marble balustrade. Within the silent church, what is most wonderful is the wood-carved ceiling, decorated in gold-plated with Stories of Virgin's Life, Saints, Prophets, Virtues, and Old Testament figures. A sublime music accompanies the visitor's footsteps along the floor crossed by tombstones while the main altar, designed by Cosimo Fanzago, changes color due to the colorful lights that illuminate it.

Sixteen chapels reveal a triumph of precious frescoes, sepulchres and sculptures of religious subjects, next to the exhibition of cribs, the fruit of overwhelming and unique craftsmanship. This is a recent path that exalts the perennial actuality of the local tradition. It is harmoniously inserted into the visitor's journey along the double track of the Christian gospel and the mysterious struggle between good and evil.

The Monumental Complex has two cloisters. The largest is scenically verdant, while the smallest is frescoed with episodes of the life of St. Giacomo della Marca, attributed to Simone Papa. It houses numerous four-fifteenth-century funerary monuments from the church, including the enigmatic and charming sepulcher corresponding to the presumed Dracula's tomb.

From the side of the small cloister you can reach the environments of the rich Sacristy and the Old Refectory, embellished by a fresco of Bramantino entitled  "La salita al Calvario" (The Ascent to Calvary).

The museum features a "parade" of mysterious and fascinating works, boasting of contemporary art expression. Beside the works of indisputable historical-artistic value which, beginning with the wonderful golden ceiling of the Church, enhance the greatness of the Complex, you can admire those made by 89 contemporary artists. Starting in 1949, today the museum collects 136 works, in a spectrum of varied emotions and forms that celebrate contemporary religious art.

The fact that Dracula's tomb is in the historic center of Naples seems to become more and more concrete, thanks to the discovery of a sarcophagus and the presence of the name of the voivode of Romania at the place of the tomb. The small cloister of Santa Maria la Nova, one of the most visited churches in the city, would thus give hospitality to the eternal rest of the historical character on which the Irish writer Bram Stoker designed his Gothic novel. It is curious that Stoker himself lived in Naples in 1875, along with his father. Dracula's tomb - Cloister of St. Giacomo della MarcaFrom an historical point of view, it was believed that the corpse of Vlades Tepes III Dracula, beheaded, was buried in a monastery on the island of Snagov, near Bucharest. But the headstone in question does not contain mortal remains of the count, but only animal bones. So the case still remains unresolved.

The theory that Dracula's remains are in Naples evolves thanks to the researcher Raffaello Glinni. From the analysis of Italian manuscripts from the fifteenth and sixteenth centuries, he came to hypothesize that Maria Balsa, an aristocratic transplanter in the Kingdom of Naples, could be the secret daughter of Voivoda Vlad Tepes, escaped as a child to the persecution of the Turks. It is claimed that the princess of Slavic origin would have found asylum in the Kingdom thanks to the mediation of Ferdinand I and that her name was changed to avoid that her real lineage might frighten future claimants. The remains of the father, dead in battle, would have been taken by Mary to bury them in the city of Naples. Other clues have been provided from the thesis of the PhD candidate Erika Stella, who analyzed the tomb present in the cloister of the Complex of Santa Maria la Nova. It is a large marble tomb, before inserted into the church, revealing several symbols actually extraneous to the subject officially buried inside, the noble Mattia Ferrillo. On the tomb stands a gigantic knight helmet surmounted by a dragon head and placed between two opposing sphinxes. Also Glinni, at the sight of those images, came to argue that the marble tomb should belong to a knight of the Order of the Dragon, of which was part Dracula's father. The Dragon is the seal of the Order of the Dragon, while the two opposite sphinxes probably refer to the name of the Egyptian city of Tebe, also associated with "Tepes" and thus recalling the name of Vlad Tepes or Vlad Dracul.

Another connection with the land of which Vald Dracula was prince, is the coat of arms present on the tomb of Naples and the crypt of Acerenza: two paired up dolphins, coat of arms of the Dobruja,  a region of Romania adjacent to Valacchia, governed by Vlad Tepes. It was also the place where he won the battle against the Turks. The coat of arms may thus have a celebratory value of this victory, as would also be highlighted by the warrior represented on the top of the tomb, with the symbol of the Order of the Dragon.

Dracula's tomb - detailAnother mystery wraps the encrypted epigraph discovered by prof. Reale from the Istituto Orientale of Naples. It is positioned behind the marble tomb and its decryption is still evolving. There are only two words currently decoded: "Blad" (read as Vlad) and "Balkan". It is also enigmatic tha fact that an area of the tomb radiates warmth inexplicably, as detects the thermal imaging camera.