Ancient musical instruments of the music of the Naples tradition

The relationship between music and the city of Naples has a history stretching back thousands of years and is deeply rooted in the city's culture. Many musicians, lyricists, and singers have delighted audiences in squares, opera houses, and every stage in Italy and Europe since the 19th century.

From the popular music to the Neapolitan opera school of the 18th century, songs and melodies have always accompanied the Neapolitan people at practically all moments of history. But what are the ancient musical instruments of Naples? Discover them with us!

The great oral tradition and instruments for the Neapolitan tammuriata

In Naples, music has often been an instrument for celebrating a feeling, from sentimental to passionate love for one's homeland.

These were ancient times; people played, sang, and danced, at festivals, religious celebrations or even just selling.

Fortunately, we can still appreciate these traditional dances today during major religious festivals. Just think of the famous tammurriata, a term that originally designated a singing and instrumental repertoire.

Today instead it represents a family of popular dances featuring many percussion instruments, practiced not only in Naples but generally throughout the Campania region.

It almost makes one smile that this very classical repertoire was originally banned, the ecclesiastical institutions considered music made with the tammorra 'pagan' and therefore the church prohibited it. Today, however, the tammorra is considered a traditional instrument of Neapolitan music, as is the Neapolitan tambourine, both percussion instruments made of animal skin, with the latter slightly smaller and flattened, and with brass cymbals.

These two instruments are undisputed protagonists of Neapolitan and southern Italian folk music. 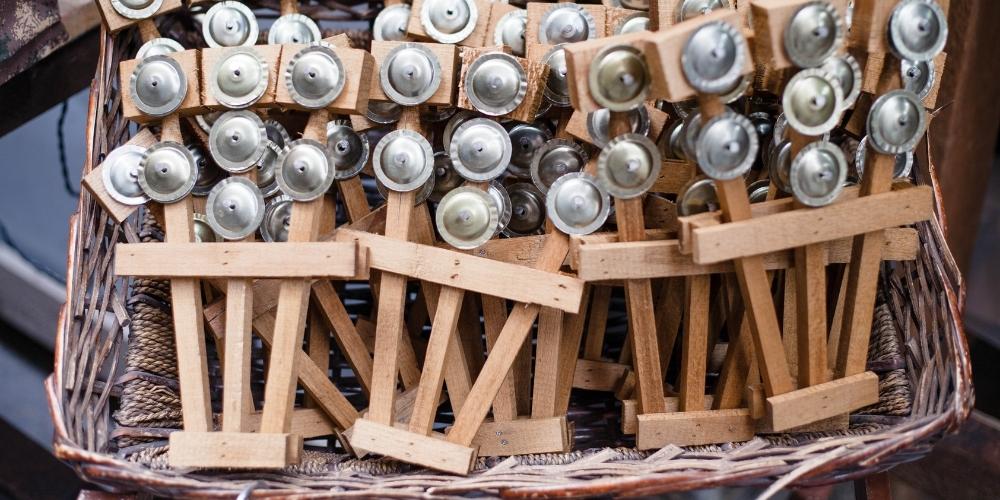 Another instrument often found in this type of music was the Neapolitan castanet, similar to spanish castanets but with a slightly different shape, capable of emitting a different sound between left and right, or different types of flutes, including the double flute recognizable in several paintings from ancient times.

In addition to this, instruments that have become part of the collective imagination, characteristic of Naples and protagonists of southern Italy, were widespread. We are talking about the Putipù, an instrument composed of an animal skin membrane, a wooden reed and a resonance chamber.

Then there is the so-called scetavajasse which consists of two wooden sticks, one smooth and the other notched, whose typical sound comes from the rubbing of the two. Impossible to forget!

Finally, there is the so-called triccabballacche, a percussive instrument consisting of three wooden hammers tied together by a frame. The three hammers are parallel while the two wooden frames are perpendicular to the hammers, it can also have tin saucers.

A much-loved instrument, especially in the more folkloristic circles of Campania, and much used in ancient and modern square festivals