Ghost and love stories in Naples: the legend of Maria D'Avalos

The story of Maria D’Avalos and her ghost goes back to 1590, when she and her lover Fabrizio Carafa were found together in one of the rooms of San Severo Palace by Carlo Gesualdo, Prince of Venosa and legitimate husband of Maria.

The relationship between the two lovers started because of the rushing personality of Maria who, after four years of marriage, was tired of her husband, defined as an  indifferent, less attractive and obsessive (in the manners) man, interested only in his passion for music and not in her as a wife, from whom had had a son named Emanuele.

During a party of the Neapolitan aristocracy, in fact, Maria met Fabrizio, who belonged to the family of the Dukes of Andria; he was also known as L’Arcangelo, due to his charm and to the fact that at the time he was married to Maria Carafa, an aristocratic woman, from whom had had four children.

From that time on, rumours about their adulterous relationship took place, spreading over the city and increasing more and more, until the tragic death happened on the 17th of October 1590,  by the murdering hand of the Prince of Venosa who, full of jealousy, killed both the lovers with a dagger and then ordered to expose the naked bodies the following morning in the middle of San Severo Palace’s stairs, under the look of the entire city. The setting of this dramatic event is San Severo Palace, in San Domenico Maggiore Square, which was built around the 16th century by Paolo di Sangro.

It is said that, from that day on, and every single night, those who lived near the Palace could clearly hear Maria’s voice until the end of time.

Also, those who lived in it were victims of a curse lasted about seven generations.

But in 1889 one of the wings of the palace fell down, bringing out the room where the tragic epilogue happened, and giving the birth to the legend according to which Maria D’Avalos’s ghost is still walking by night through the square, wearing scanty dresses and still looking for her lost love.

That’s why San Severo Palace is considered one of the most beautiful pages of Naples’history: in it it is possible to find beauty, art, science and a kind of mistery. 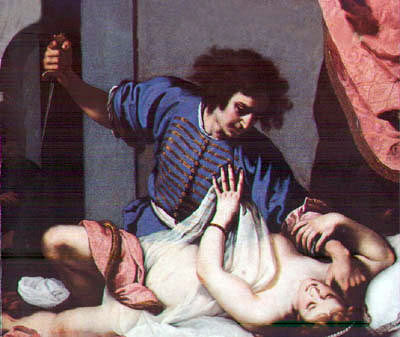