Napoli and football: strong bond between sacred and profane 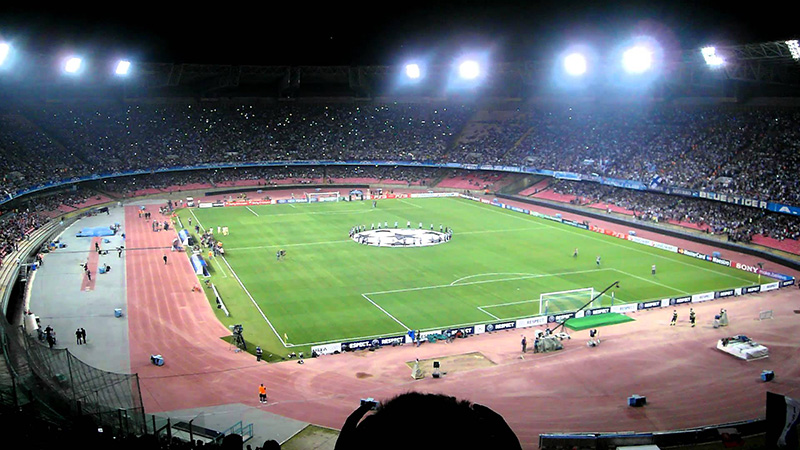 "SSC Napoli is not just a football team. It’s the city’s state of mind". This is the most widespread quotation among footbal-addicted in Naples.

Footbal is in Naples like worship and devotion. All the Divine Liturgy that goes on during football matches fully represents the behaviour of the southern state capital. The temple and church of the passionate light blue fans is the San Paolo Stadium, placed in the neighborhood Fuorigrotta: the name “Fuorigrotta” comes from the fact that, in order to reach the area, people used one or more tunnels (grotte).
The Stadium hosts SSC Napoli matches from 1959 and was renewed for FIFA World Cup in 1990. San Paolo hosted both third class teams, as well as Champions Leauge, and it was also the perfect stage for the strongest football player in the world. 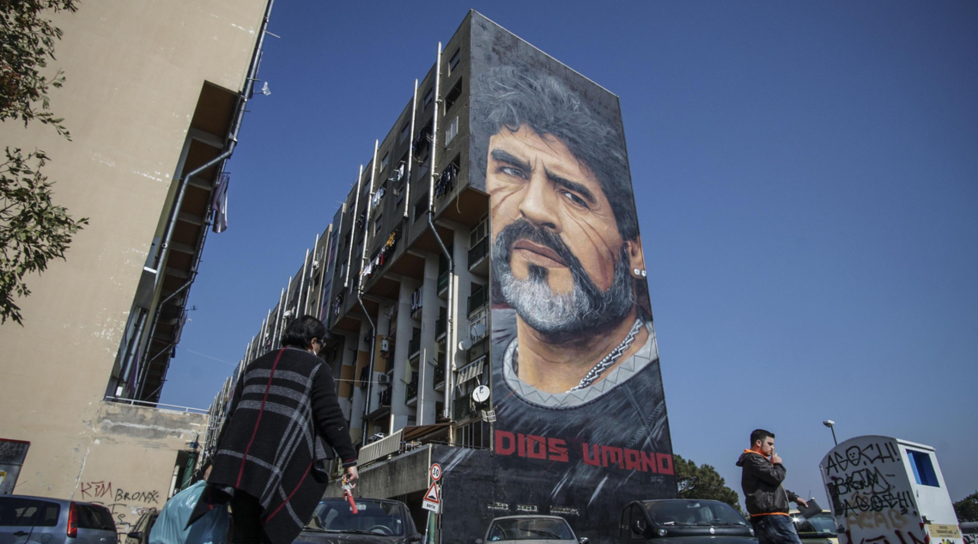 Diego Armando Maradona, a neapolitan born in Argentina due to a mistake, played in the team from 1984 to 1991; this was the period when the most prizes were won.
Maradona is worshipped as the football prophet, the god of the ball. The citizens expressed their devotion to the Argentinian champions multiple times through niches (really popular in southern Italy and used to worship the Virgin Mary or the Saints), theatre performances and dozens of graffiti portraying the D10S Umano, the “human God”. The photo on the left portrays the most recent graffiti painted in the working-class area of San Giovanni a Teduccio. The graffiti was made by Jorit, an artist of both Dutch and Neapolitan origins.
Under the leadership of Maradona SSC Napoli won a national cup, Supercoppa, UEFA Europe League, and two Italian cups scudetti. Napoli recently celebrated the 30th anniversary of the first scudetto won in 1987: the Team has organized multiple events culminating in a commemorative match between two teams made out of all the campions playing in the 1980s team.

The light blue team had luckily many idols during its history, but none of them was as loved as Maradona. The only thing, which could be compared to him, is the symbol of SSC Napoli: 'o Ciuccio (the donkey). During the foundation of the team, directors chose the letter N as the logo of Napoli: the N was associated both with the first letter in the surname of the leader Napoleon, and with a strong and fierce horse. The team did not reach good results during the first matches, so Neapolitans ironically chose to replace the fierce horse symbol with a more modest donkey. The team often hosted a real donkey in San Paolo Stadium as a lucky charm during the hardest and most heart-felt matches for fans. Strong rivalries are to be found against Juventus FC and AS Roma. The latter was Napoli sister city in the ‘80s: during that period SSC Napoli and AS Roma founded and played the Derby del Sole, a match supported by the high rankings of both teams in the ‘80s.