Italians take their saints seriously. Whether it’s Saint Ambrogio in Milan, or Saint Rosalia in Palermo, you don’t mess with the patron of your city. Nowhere is this more the case than in Naples, and no saint is as untouchable as San Gennaro. Every year on September 19th, Neapolitans gather at the Duomo church in the center of Naples to witness the miracle of San Gennaro.  Gennaro was the archbishop of Benevento (a city not far from Naples) in the fourth century, and was beheaded for his Christianity. Legend has it that a woman collected an ampoule of his blood and conserved it as a relic to be worshipped. The blood solidified (or rather gooified), but didn’t remain so: three times almost every year for centuries, a miracle occurs— the blood in the vial liquefies.

On those rare occasions when the blood has stayed solid, disaster has struck the city of Naples—or so it seems to Neapolitans. They will point out that after San Gennaro’s blood failed to liquefy in 1980, an earthquake struck Naples and killed nearly three thousand people. Another solid-blood year was 1528, when plague devastated the city. If the blood stays solid, Naples could be prey to any catastrophe from the eruption of Vesuvius to international terrorism.

So it’s no wonder that women stay in the church the day and night before praying to San Gennaro to liquefy his blood and thus protect the city. These faithful signore don’t take their eyes off the statue of the saint, which is displayed next to the altar. He has a pointy red hat, a red cape, and a pose that is serene and Buddha-like.

The women flatter him. “San Gennà, comme si bbello,” how handsome you are! And “Tu si ’o primmo santo nuosto,” you are our first, our most important saint! (As the competition between the saints is ferocious, the women have to reassure him that he’s their guy.)

I’ve lived in Italy for twenty years, and although I’m married to a Neapolitan and love Italian culture with a passion, I have reservations about the relics and miracles. So it was with a bit of Anglo-Saxon skepticism that I decided to go to the Duomo to witness the miracle for myself. I expected superstition and melodrama. I didn’t expect to be profoundly moved. 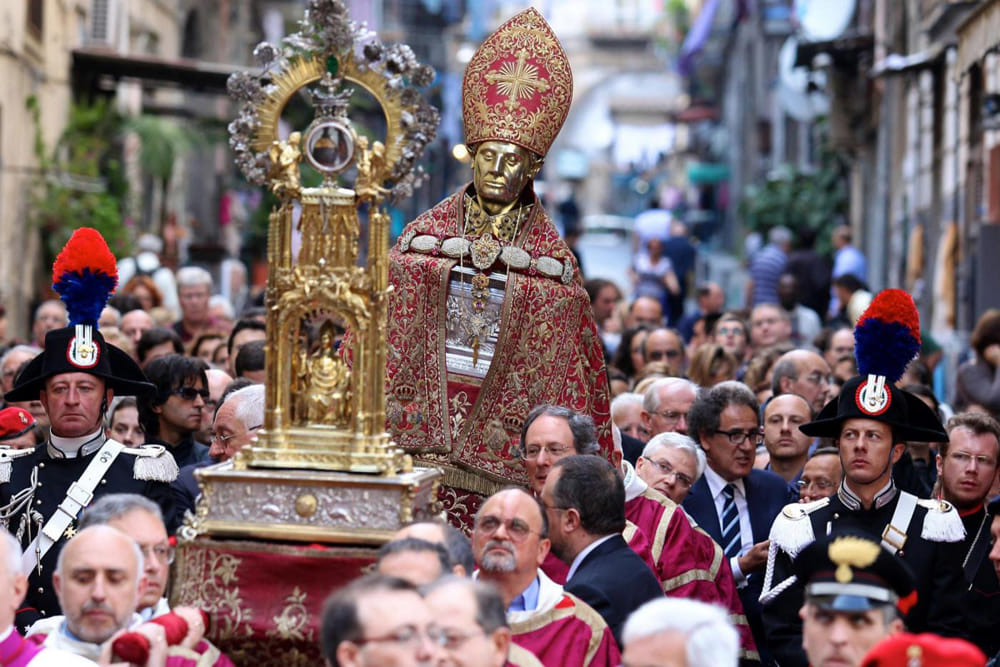 The church was a great pulsing mass of humanity. I pushed my way into the side chapel, where the bishop would open the safe that contained San Gennaro’s blood. Would it liquefy again this year? Tension was high. An elderly gentleman next to me was murmuring softly “San Gennaro loves us. He protects us. Ci ama. Ci ama . . .” He kept repeating “he loves us, he loves us,” almost inaudibly. The ornate, frescoed chamber smelled of incense mixed with BO. I rested my arm on what I thought was a pedestal but soon realized was a lady’s shelf-like hip – we were that close.

When the archbishop arrived with the key to the safe, people started pushing and standing on their tippy-toes in a futile attempt to see whether the blood was liquid. “Si vede?” Can you see? they started asking each other. “È liquido?” Is it liquid? And then, “He’s closing the safe! He has the blood!”

The man next to me had begun to cry quietly. He was wiping his nose. He saw me looking at him. “Signurí, lloro ’o ssanno! Lloro sì e noi no!” They already know! They know and we don’t. It was almost unbearable that the priests knew whether the blood had liquefied and we would have to wait.

Thankfully we didn’t have to wait for long. We followed the procession, led by the vial of blood (held in a golden reliquary high above the head of the bishop) to the altar where the statue of San Gennaro watched over the proceedings. The bishop positioned the reliquary near the altar—ceremoniously, calmly, God! he was taking forever!—and we tried to distinguish whether the black that we saw in the ampoule was liquid or solid. It was impossible to tell.

Then the bishop raised a white handkerchief, the symbol that the blood had liquefied.
At that precise moment, San Gennaro, with his red cape and pointy hat, became a rock star. He was the Beatles, he was Elvis, he was Madonna at Madison Square Garden. The crowd gave it up, cheering and clapping and crying. Outside, fireworks started popping. The bishop announced, bellowing over the crowd, that when he opened the safe, the blood was already liquid. “People of Naples!” he paused, waiting for the commotion to quiet down. “San Gennaro loves us! San Gennaro will protect us!” The crowd answered with shouts of Evviva San Gennaro! Long live San Gennaro! Then he repeated, “Cari Napoletani, dear people of Naples, the blood was already liquid.”

There was one last, explosive Evviva San Gennaro!, followed by applause, before everyone left the Duomo, exhausted but renewed. Confident of the protection and love of the supreme saint – the one and only San Gennaro.

This article is written by Katherine Wilson, an American writer who has been living in Naples for years, capturing the most particular and profound aspects, and describing them in her books through her very own personal and "american" point of view.
In Katherine Wilson works you will discover all that curious things that can happen only in Naples.