The history of Palazzo Spinelli 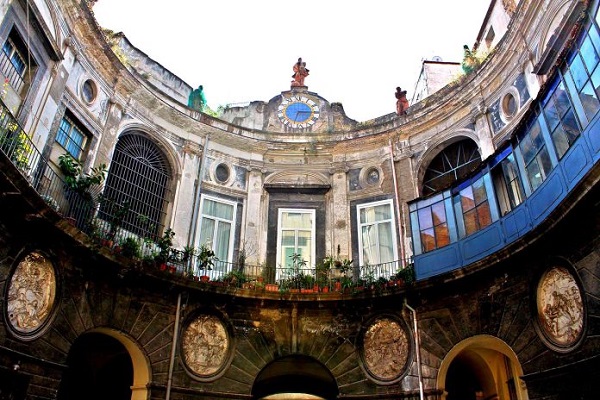 Palazzo Spinelli di Laurino is one of the oldest and most enigmatic monumental buildings in Naples. It is a palace that belonged to Troiano Spinelli, an important Italian philosopher, economist and historian, Duke of Aquara, born in Laurino in 1712. The duke belonged to the noble Neapolitan Spinelli family.

Palazzo Spinelli is located at number 362 of Via dei Tribunali, on the Decumanus Major of Naples. To better clarify the ideas to the inexperienced, it is located exactly in front of the historic pizzeria Sorbillo and is easily recognizable thanks to the presence, on the main door of the palace, of an eagle with its wings spread out on whose chest there is the coat of arms of Laurino and Tuttavilla di Calabritto, family to which belonged the wife of Troiano Spinelli.

The palace dates back to the Xlll century. It was born from the union of two pre-existing buildings. It seems that before belonging to the Spinelli family, the famous humanist Gaetano Pontano lived in the palace many years before. From the union of the two buildings was born what we know today as Palazzo Spinelli, in 1767. At the time it represented a real pearl of architecture in that it possessed, and still possesses today, a circular/elliptical inner courtyard, the only one of its kind in Naples. The inner courtyard is adorned with stuccoes, terracottas of remarkable beauty and twelve allegorical statues bearing the signature of Jacopo Cestaro. In the middle of the courtyard you can see a clock, the statue of a virgin and two Roman busts, located inside niches, which act as sentries, to watch over the palace. Ferdinando Fuga and the architect Ferdinando Sanfelice took part in the restoration works - which made the building as it is today. What makes the palace known, however, is its imposing internal double flight staircase, the protagonist of a very special event.

Despite the grandeur and majesty of the palace's interior, its façade is, unfortunately, in a state of apparent dilapidation, damaged in several places due to the detachment of the stuccoes that lay bare the base of tuff that forms the body of the structure. The palace has a double entrance, in addition to the one located in Via dei Tribunali, there is a second one on vico Fico in Purgatorio, where there is the Spinelli family chapel.

Spinelli Palace of Laurino in Naples

Naples, hides stories and legends, sources of inspiration and obligatory stops for tourists visiting the city. When we talk about stories, we cannot fail to mention the legend of the ghost of Bianca, who haunts Palazzo Spinelli di Laurino.

The legend of Bianca's ghost at Palazzo Spinelli di Laurino

Like every self-respecting historical building, Palazzo Spinelli is also famous for the presence of a ghost that wanders among the internal halls of the structure. Numerous are the sightings of an evanescent figure that often stops on the huge internal staircase, at the intersection of the two staircases. Legend has it that it is the ghost of Bianca, a young bridesmaid in the service of the Spinelli family. Bianca was a young orphan of upper middle-class origin who was 'adopted' by Duke Spinelli, the master of the house. The story goes that Bianca was walled up alive in one of the palace's many rooms. This was decided by Troiano Spinelli's wife, Lorenza, who was jealous of the young girl who won the Duke's heart. Lorenza Spinelli was a cynical, cruel woman who her husband was quick to betray. When the Duke, before leaving for the war, went to his wife for a last farewell, she did not pay him the slightest attention and, while he was leaving the room furiously, he met the sweet and innocent look of compassion of the young girl. That look caught the attention of the Duchess who, in jealousy, ordered Bianca's life to end by walling her up alive.

The innocent bridesmaid, once she had accepted her vile destiny, before dying would cast a curse, which would still burden the house today. Bianca could not defend herself in any way, but she had the strength to pronounce these words: "Famme pure mura' viva, ma in allegrezza o in grannezza tu me vidarraje", literally "Let me be walled up alive but in joy or despair you'll see me again". A curse that still hovers over the family and in the rooms of the Spinelli palace. From that day on, it is said that the young Bianca would appear to the family 3 days before an event, whether mild or tragic. Dressed in white if what was about to happen was happy, in black instead, if a tragedy was about to befall the family.