Naples is a city that has always inspired creative people: for better or for worse, its untamable chaos combined with its unique charm have made it the perfect location for many fictional works, including Maurizio De Giovanni's The Bastards of Pizzofalcone. The Neapolitan writer, first with the famous Inspector Ricciardi saga and later with the Bastards, has created his own Neapolitan mythology showing lights and shadows of the Neapolitan capital, thanks to detective stories become nationally famous. It was therefore only a matter of time before the comic medium became involved in what is now a full-fledged franchise, which has also given rise to TV series. And that’s how in 2019 the comic book version of the Bastards of Pizzofalcone has been published, with the peculiarity of presenting anthropomorphic dogs as protagonists, to underline their identity as bastards. The adaptation, with cover art by Daniele Bigliardo, is written by Claudio Falco and Paolo Terracciano, drawn by Fabiana Fiengo and published by Sergio Bonelli. The artists belong to the stable of Mario Punzo's Scuola Italiana di Comix, another important Neapolitan reality. Below are some of the places "photographed" by Fiengo, all places loved by De Giovanni and used as a backdrop for his fervid imagination. 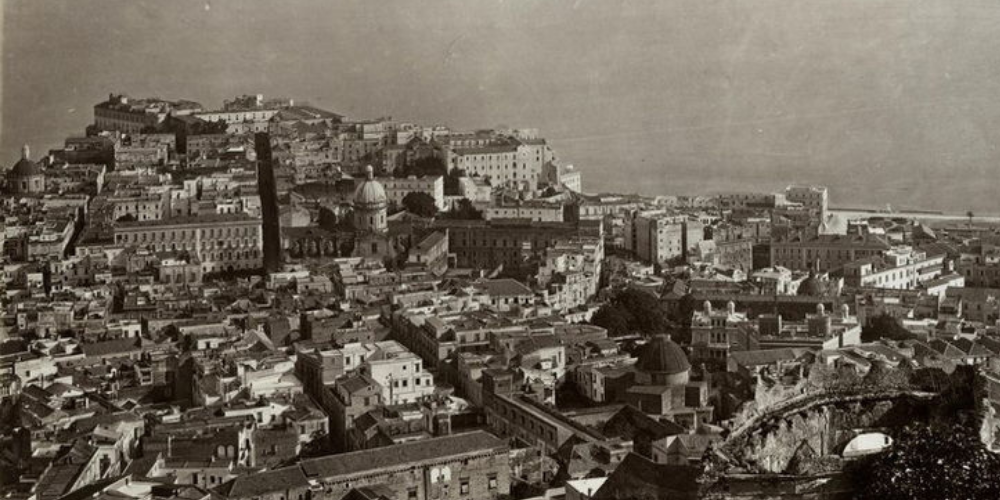 The hill of Pizzofalcone (60 metres high) is also known as Monte di Dio and is part of the San Ferdinando district. The origin of the name Pizzofalcone is very old, as it dates back to the time of the King of Naples Charles I of Anjou (around mid-13th century), who used to hunt falcons in this area, with a falconry built on top of the hill. Monte di Dio, on the other hand, was a church of the same name that no longer exists.

Pizzofalcone, although it cannot boast a large extension, sees the presence of many places linked to the art and history of Naples. Just to name a few: the archaeological site of Monte Echia, Villa Ebe (by architect Lamont Young), Palazzo Carafa di Santa Severina and the Church of the Immacolatella in Pizzofalcone, the Church of Santa Maria Egiziaca in Pizzofalcone (by Cosimo Fanzago) and Palazzo Serra di Cassano, home to the prestigious Italian Institute for Philosophical Studies. This palace is not the only one in the area to have been built between the 17th and 18th centuries, there is i.e. the Politeama Theatre.

Via Chiaia: luxury shopping and the birthplace of Margherita Via Chiaia - totally pedestrianised - is one of the best-known streets in Naples' historic centre, renowned for luxury shopping, halfway between the San Ferdinando and Chiaia districts. There are many well-known businesses in the area, and legend has it that an alleyway is also the place where the now legendary Margherita pizza is believed to have been invented. Other churches and historic buildings add to the charm of the walk along this beautiful and characteristic street of Naples.

From Piazza dei Martiri, where Via Chiaia officially ends, you can access the Riviera di Chiaia. If you turn right after the Cellamare palace, you will find yourself on Via dei Mille which, together with Via Chiaia, is another street known for its designer shops. It's interesting how Via Chiaia is so intrinsically linked to the Quartieri Spagnoli, running alongside it.

Spanish Quarter: a unique area for the characteristics of its streets and buildings Quartieri Spagnoli is one of the most characteristic and discussed areas of Naples, located in the historic centre and comprising the Montecalvario district, together with lower portions of the San Ferdinando and Avvocata districts. The Quartieri have a military origin: in the 16th century, Viceroy Pedro de Toledo needed a place to station the Spanish garrisons, or as temporary accommodation for soldiers passing through the Neapolitan capital.

Unfortunately, perhaps because the area was intended for foreign soldiers who cared little for the city, from the very beginning the Quartieri Spagnoli saw the birth of sad phenomena, with the spread of prostitution, crime and gambling. Although several workshops were later opened, the problems of this area remained unsolved for a long time.

Today, the Quartieri Spagnoli is an important tourist site, both for its artistic and historical importance and for the presence of unique craft workshops, attracting foreign tourists as well as Neapolitans themselves. From the point of view of folklore and "typicality", the Quartieri are truly representative of the Neapolitan way of life in the world, with their "bassi" and typical shops, the old-fashioned trattorias and that noisy human warmth that, although it may seem like a stereotype, is really hard to find elsewhere.