Naples from above: the Capodimonte's hill

The Capodimonte hill has always overlooked and protected the city of Naples since its foundation. A real naturalistic and cultural center just a stone's throw from the center of Naples. A green lung, a royal residence, masterpieces of any age and then again Churches, cemeteries, catacombs and contemporary architecture that make the Capodimonte district a pearl for the city of Naples.

Capodimonte contains in its strip of land beauties that you can hardly find elsewhere. Here are 5 places that you absolutely must see.

The Capodimonte museum between art and events The Capodimonte Museum - Located inside the homonymous palace, it has housed works by national and international artists since the 18th century. Currently it contains two collections that boast artists such as Raffaello, Tiziano, Parmigianino, Simone Martini, Caravaggio, Francesco Solimena, Andy Warhol, etc. Every year, especially during the summer, cultural events are also organized, as aperitifs and exhibitions.

Green in Naples: the Royal wood of Capodimonte 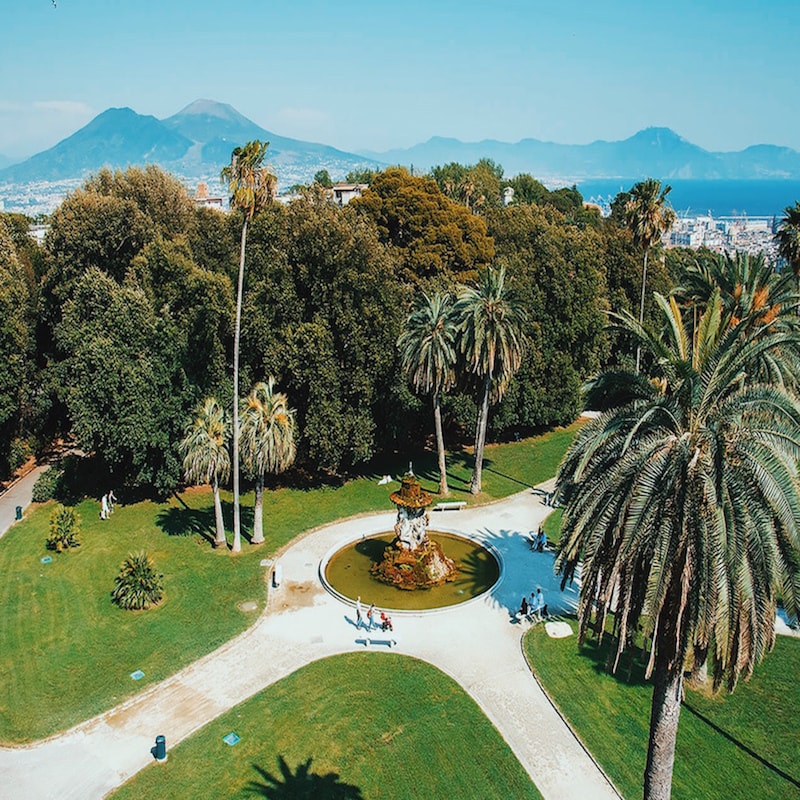 The Real wood of Capodimonte - The royal palace of Capodimonte is situated inside the forest of Capodimonte, the real green lung of the city. It extends almost all over the hill and contains in itself architecture and sculptures of every kind that had been there since the time of the royalty. Open almost all year round, it is a real royal park opened to the public.

A square rich in art and greenery: the Capodimonte tondo

The round of Capodimonte and the gardens of Princess Iolanda - Built in the late nineteenth century to create a more immediate connection between the city and the royal palace of Capodimonte, the round and the gardens host paths and terraces full of greenery from which it is possible to have a breathtaking view of the city . Designed by Antonio Niccolini, the gardens, named after Princess Iolanda Margherita di Savoia, dug out of the tuff and finished with piperno, contain indigenous herbaceous species and a large staircase that connects the round with the Capodimonte forest and the homonymous royal palace.

Sacred and profane in Naples: the catacombs of San Gennaro

The catacombs of San Gennaro - Naples is rich in secrets hidden in the subsoil and Capodimonte also contains in its subsoil a unique beauty. The catacombs of San Gennaro, in fact, are a spiritual itinerary carved entirely into the tuff of the hill and which hide treasures, intact, from an era that has not existed for over ten centuries. From the relics of San Gennaro and Sant'Agrippino to frescoes, furnishings and relics that have completely different stories to tell, underground paths that let us rediscover moments and atmospheres of a past, now, remote.

Scientific poles in Naples: the astronomical observatory of Capodimonte

The astronomical observatory - Established by Giuseppe Bonaparte in 1807 is the oldest scientific center of Naples. The Naples Observatory is committed to the research of modern astrophysics and is located on the hill of Miradois, a hill near the palace of Capodimonte. The building, designed by Federico Zuccari and Stefano Gasse, is in a wonderful location on 150 meters above sea level, towering above the splendid panorama of the city and the Gulf of Naples.

Capodimonte boasts other beauties that deserve to be visited and it is easily reachable from the city center, it is a place where you can stay if you want to spend your holidays surrounded by greenery and culture. Right here is a perfect place to stay amidst the greenery and culture of the hill, the Culture Hotel Villa Capodimonte, situated in a large park overlooking the Gulf of Naples, is a perfect place to spend your holidays. And what are you waiting for? Come and enjoy the beauties of Naples all year round!