Castel dell’Ovo: history and magic between land and sea

Castel dell’Ovo is the oldest castle of Naples. It is the “Golfo’s keeper”.
Its aspect has changed through the centuries after many wars: in fact the castle was originally built by the Normans, restaured by the Angioinians first and then Aragonese.
Its name means “Egg’s Castle”. According to the legend, the ancient Roman poet Virgil hid a magic egg in the castle dungeon. This egg had the power to protect the entire fortress. If it broke, Castle and Naples would have been destroyed.
Actually, its etymology comes from its oval shape.
Now in the Castle there are the offices of the Regional Directorate for Cultural and Landscape Heritage of Campania Region. Castel dell’Ovo is not only a tourist spot, but also a place for events, meetings, exhibitions and photographic sets.

Where is Castel dell'Ovo: the position

It is very simple to reach the Castel dell’Ovo from the city center.
The castle is in the beautiful via Partenope, the promenade of Naples. A street famous for its history and surrounding natural beauty.
From the towers and terraces of the castle you can enjoy a charming sight of the Gulf of Naples.

What to visit in Castel dell'Ovo

Castel dell’Ovo is divided in two parts: inside and outside. The blank spaces are filled in occasion of exhibitions and banquets. The terraces are the setting for photo-shoots and nightlife events.
Let’s see in detail...

The outside of Castel dell'Ovo

By simply crossing the Castle’s pier you can appreciate its beauty. The Ramaglietto pier was built on the “edge of the sun”, where there were the windmills. In 2016 it became the runway for the fashion event organized by Dolce&Gabbana.

Inside the walls you can see the Normandia Tower. This tower is built on arches in piperno (igneous rock, very common in Campania). It shows battlements in Guelph style which were added in a second step.
After the tower you meet San Salvatore’s Church. This is built on granite columns with Roman capitels. Inside there are late Byzantine frescoes.
Cannons Terrace is the highest Castle’s area and the view from there will leave you out of breath, especially at sunset.
The view of the Gulf of Naples is offered by two terraces: West Arcade, with the view on the city and East Arcade straight on the gulf.

The interior rooms of the castle 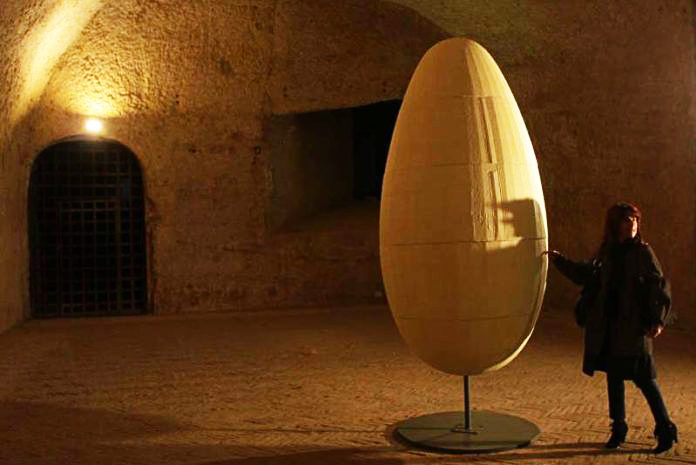 On the inner walls, if you look carefully, you will see some frescoes. Unfortunately, these have been dameged by the time and become unreadable.
The castle has got six halls, each with its own characteristics.:

Its terraces and halls can be used for meetings and exhibitions. Organisers can freely choose which company recruit to prepare their event.
About coffee-breaks and buffets (standing), it is strictly forbidden to use storage highly flammable. During buffets, both concerts and shows are prohibited.
In the Castle film and photo shootings can be made, but only for strictly personal use (ex. Weddings, First Communins, ect.).
For renting its terraces and halls you need to submit official documentation, detailing the kind of event and service. Material available is on Comune di Napoli website.

The Castle is always amazing! In every moment of the year it’s enjoyable to visit. In my opinion, the best period is Spring/Summer: considering the wind and the sea, during the warmer seasons it’s nicer to visit outside and walk on the terraces.

Are you wondering about the best hour too? Well, maybe in the early evening (5pm – 7pm) on weekdays, ending your visit in the highest area of the Castle. There, you will be fascinated by the marvelous sunset’s view. A good idea for your anniversary or one of the best moments of your honeymoon in Naples: sunset kiss on the top of Castel dell’Ovo…that’s Amore!