Discovering the underground Naples in the Galleria Borbonica: history and adventure in raft

History and construction of the Galleria Borbonica (Bourbon tunnel) For a better discovering of this dark and enchanting place, surrounded by mistery and centuries full of history, and situated between Monte di Dio and Via Domenico Morelli, you need to travel back in time.

Are you ready? The Bourbon Tunnel's history dates back to the 19th February 1853, when Ferdinand II of Bourbon assigned, with a decree signed by himself, to the commissioned architect Enrico Alvino, an escape route project which could bring both the monarchs to escape through an underground viaduct linking the Royal Palace with Victoria Square.

The historical and political situation of the time determined so many delays of the works, to be interrupted just two years later, in 1855: in that period, Alvino himself found out a lot of problems during the excavations, in order to bring to light two caves made of tuff, called "Carafa Caves", from which some other tuff was extracted for the Nunziatella Church's building, where currently is situated the Military School.

With the outbreak of World War II, from 1939 to 1945, the Tunnel was used as an air-raid shelter for more than 10.000 Neapolitans who had been losing their houses during the bombings.

It was right here that most of their daily lives went on: it is possible to find, in fact, a lot of testimonies, such as: toys, buggies, meds, jugs, pots and also stretchers and beds, shared with everybody. On this tragic occasion, there were made many other entrances which let people access from Monte Echia area, just like, for example, a staircase currently situated in Vico del Grottone, dating back to 1700 and used by the "pozzari" for the maintenance of the cisterns.

Among them, there are some old cisterns of the seventeenth-century, where, all the "pozzari"  drew the water through the "mummarelle", used not to lose it.

Later, these environmentes were used as Police Car Pound because of all the things that were dug out from the ruins, such as, cars and Vespas dating back to the early 50s.Today, the Bourbon Tunnel is composed by a forth environment situated near Serra di Cassano Palace, where the ex Italian President Napolitano found refuge.

A walk in the underground Naples: the standard route

On the staircase found out under tons of debris and dating back to the 18th century, the Standard Tour takes place. From Vico del Grottone n.4, near Carolina Square, visitors have the chance to get down in the underground environments at a depth of 25 m and to start this travel in time through cisternes, aqueducts, bathrooms, cars, motorbikes and old furnishings.

Back to Trieste e Trento Square, it is possible to acceed to the other entrance situated in Via Domenico Morelli, where there are recollected big statues' fragments, vintage cars and motorbikes still in perfect conditions, which made the Tunnel a Police Car Pound. On the bridge realized for the Bourbon's escape, it is possible to visit all the several cisterns and to know more about their functions; besides, it is possible to pass through all the environments used as war shelters, of which were found several different objects.

Accessibility: entrance for disabled people who can take parto to the 60% of the guided tour, from via Morelli.

A walk in the underground Naples ... In the Way of the Memories

During the War period, also the ex Italian President Giorgio Napolitano found refuge into one of the Tunnel's environments, and more preccisely, into the one situaetd under Serra di Cassano Palace, brought to light after about three years of excavations.

Inside of this space, properly called "Via delle Memorie" it is possible to visit the places where tuff used of the building of the Palace had been dug out, as well as the underneath acqueduct, where it has been collocated a wonderful cistern full of water. From here it is possible to proceed with the visit of the Tunnel, then to reach the Morelli Parking.

Accessibility: the tour is NOT accessible for everybody, because of the staircase. 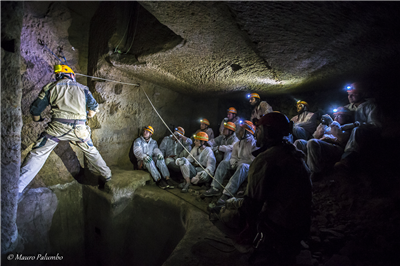 As real speleologists, with the Speleo Tour Light you'll be able to look around among the several tunnels of the ancient underground acqueduct, with still all the cisterns, partially containing water and decorated with mysterious symbols.

From here it is possible to have a long walk among the narrow tunnels of the acqueduct system of the Bolla (one of the oldest acqueducts in the Tunnel, dating back to 1600) and reach all the environments on which walls are still visible the signs left by the pozzari. Besides, with this type of tour you can have the chance to visit the brand new environments brought to light after the escavations activitiy by many volunteers.

Accessibility: the tour is NOT allowed to those who suffer of claustrophobia or have disability.

A walk in the underground Naples: an adventure path on a raft

From the Adventure Tour you'll be able to enjoy every type of different emotion: from wearing helmets and torchs to sailing on a raft. With the help of expert guides, you'll have the chance to canalize yourself into a cistern dating back to the end of the 15th century, inside of which it is possible to see the hydraulic works and all the cross carved into the mault and made by the pozzaro; to walk until the second cistern where it is the ground water; to walk the ex LTR tunnel and, most of all, to come to the ending of the 17th century escavation where, on the walls, there are carved all the names and thoughts of those who got down into the shelter during the War period.

Accessibility: NOT recommended to people who suffer of claustrophobia or have a disability.

How to reach the Bourbon Tunnel by pubblic transport

From the Harbour: with the Municipio Square metro (line 1), get off to Toledo station; from here go towards Trieste e Trento Square. Following Plebiscito Square, just move on the right, climbing towards Carolina Square. From here, just proceed towards Gennaro Serra Street, direction Monte di Dio: on the second street on the left side, you will get to Vico del Grottone.

From the Station: to reach the entrance in Vico del Grottone, just take the bus or the metro towards Trieste e Trento Square and proceeding along the previous indications.

From the Airport: from the Napoli International Airport, in Capodichino, you will get to Municipio Square and to Molo Beverello through a shuttle bus called Alibus which will take 20 minutes.

From the Harbour: as for the entrance in Vico del Grottone, also for the one in Morelli Street it is possible to reach Municipio Square and go towards Victoria Square in a few minutes. Here, after having walked along the tunnel in Acton Street, at only 100 m away on the right, in Domenico Morelli Street, it is possible to acceed to the Bourbon Tunnel through the Morelli Car Parking.

From the Station: it is possible to reach the entrance in Morelli Street with tram or buses in Vittoria Square.

From the Airport: it is possible to reach the entrance in Morelli Street with the shuttle-bus Alibus which, from the Napoli International Airport, in just 20 minutes will take you to Victoria Square: a few metres away, you will find yourselves at the entrance of the Morelli Car Parking.

From the Harbour: from the port it is possible to reach Municipio Square to move then towards Trieste e Trento Square, direction Plebiscito Square. From here, as for Vico del Grottone, just climb back to  Gennaro Serra Street from the right side of the Square itself. Just keep the left side and 80 m away you will get to Serra di Cassano Palace.

From the Station: Catch a tram or a bus to Municipio Square and follow the directions as indicated in the previous point.

From the Airport: From the Napoli International Airport catch the Alibus (a shuttle-bus) and, in about 20 minutes, you will reach the port in Municipio Square – then, follow the directions as indicated in the first point.