Night of San Lorenzo: what do you do in Naples and surroundings

The tradition of San Lorenzo has ancient roots, mixing the sacred and the profane, the tears of San Lorenzo or the meteor shower if you prefer, it becomes even more magical in Naples. These are just some of the events and places to enjoy the rain of stars, so come to Naples and enjoy the magic of San Lorenzo.

The night of San Lorenzo in the sky of Naples 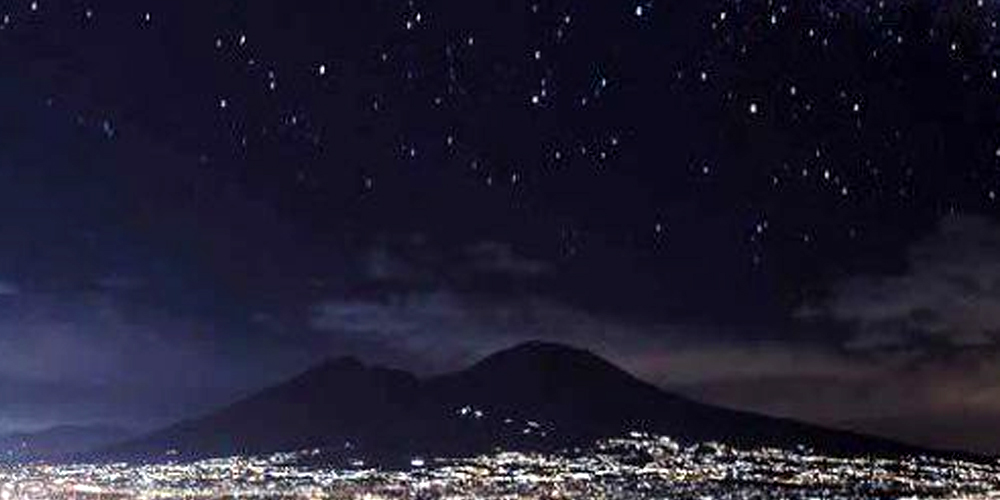 The night between 10 August and 11 August is one of the most romantic of the year, it is the night of San Lorenzo, the night of the rain of shooting stars. During the summer, the earth passes through the meteor shower of the Perseids which transforms the summer sky into a real enchantment, and in Naples, it becomes even more special.

Naples is full of enchanting places and unique beauty where you can not only experience the thrill of shooting stars but also participate in unmissable events. Let's find out together where to spend the night of San Lorenzo in Naples.

Night of San Lorenzo by the sea in Naples

On summer nights, especially that of San Lorenzo, you cannot miss the suggestion of getting lost in the beauty of the shooting stars, spending the night with your nose upon the seashore. There are many locations that we can recommend to you by the sea. Naples offers kilometres of beaches, each one more beautiful than the other, but the peculiarity of this night is that you have to privilege darker places than others to fully enjoy the starry sky.

The Phlegraean coast is also one of the favourite places to enjoy the Perseid rain. From Pozzuoli to Monte di Procida, passing through Bacoli and Baia, there are dozens of beaches where you can look at the stars, above all, D'Averno lake, the gates of the inferno for the ancient Greeks, where dozens of people are positioned to spend the night of San Lorenzo, suspended between sky and legend.

Furthermore, not far from Lake Averno, there is one of the most evocative events for the night of San Lorenzo, the Bonfire of San Lorenzo. Proposed and organized by Travelers and the City in collaboration with Visit Naples, which at Nabilah near Bacoli, offers one of the most evocative and magical events of the year. The event recalls one of the oldest traditions of the peoples who inhabited these areas, namely that of lighting a bonfire to propitiate the meteor shower of the constellation of Perseus. Founding history, legend, astronomy and antiquity that have been blended for centuries in this magical night.

The event, scheduled during the night between the 9th and the 10th of August on Nabilah beach, will see various activities from the ritual of the "Blessing of Fire" which will mark the beginning of the event including music, stars, artistic installations, up to the usual midnight swim.

In addition to the beauty of the gulf and its beaches, Naples also offers countless places inside the city where you can scan the sky. Let's find out where to spend San Lorenzo in the city. Above all, there is the viewpoint of the Capodimonte wood near the Astronomical Observatory where in addition to a look over the whole city of Naples you can observe the sky lying on the soft lawn of the garden of the Capodimonte Palace. Among the other unmissable places in the city, there are undoubtedly the viewpoint of San Martino on Vomero and the beautiful panorama that the Posillipo hill offers, especially along the Coroglio descent, one of the darkest places in the area to look at the sky.
Finally, if you want to get away from Naples, I can't help but mention the starry nights among the ruins of the city of Pompeii, in particular in the Roman amphitheatre where events are organized between music and art, and the beauty of the Amalfi coast where the Path of the Gods comes alive even at night to offer you a walk with breathtaking views suspended between sky and sea. 9 August at the Nabilah with Visit Naples.

The tradition of this night has Tribal origins: the ancients calculated that every year on this day, the Earth passes through the PERSEIDS meteor shower, coming from the PERSEUS constellation and that on the night of 9 August, through the lighting of a FALÒ, a magic happens that makes everything possible.

Fire, astronomy and magic have come together for thousands of years on this night, through a very precise ritual, that of the "Blessing of the Sacred Fire".

The ancient tribal ceremony will take place on 9 August on the Nabilah beach, where from 8.30 p.m. until late at night, among embers, food, music, stars, international performers and artistic installations, it will seem like being on the set of a surreal film.

The dress code of the event is: WILD tribe style

FIND OUT FOR FURTHER INFO❯