One of the dark sides of Naples: the Bourbon Tunnel

Everybody knows that Naples is famous for its light and colours, but it is important to underline also its "dark" sides. One of these is the Bourbon Gallery, a long tunnel built in 1853 by Ferdinand II of Bourbon, then used - during World War II - as a refuge for citizens. Let's discover this wonderful place together.

History of the Bourbon Tunnel 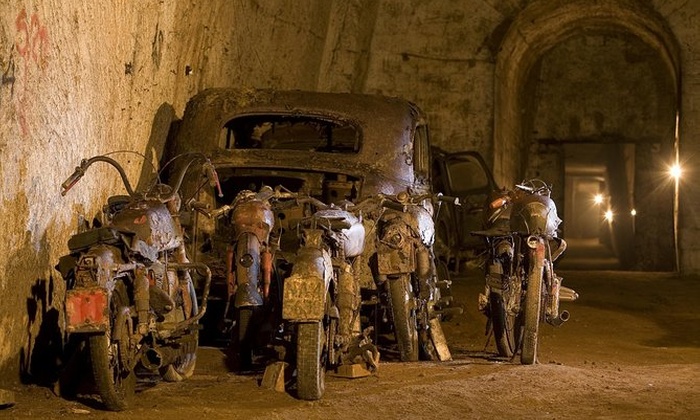 The history of the Bourbon Tunnel dates back to 1853, when Ferdinand II of Bourbon ordered his architect Enrico Alvino to design an underground escape route, which would allow the monarchs to escape after the uprisings of 1848. It was also used as a military passage for all the troops who had acqaurtiated in Via Pace (now Via Domenico Morelli), in defence of the Royal Palace. But the works were interrupted only two years later, in 1855, because of the political events that culminated in the end of the Kingdom of the Two Sicilies and the consequent expulsion of the Bourbons. However, it was completed on 25 May of that same year, the day of its inauguration. The initial project consisted of an excavation of the tuff mountain, from which two galleries would be extended for about 84 m and would culminate in two quarries called "Cave Carafa". At that point, however, the passage was blocked by the ancient aqueduct of Bolla, where the tunnel was finally completed with masonry and brick works, without destroying all the wells and tanks that were later separated by masonry viaducts. During the Second World War, the Bourbon Tunnel was used as a refuge for all citizens who lost their homes in the period between 1939 and 1945; the tanks were, in fact, used as a refuge for more than 10,000 people who tried to save themselves running through the staircase of 90 steps, which is still located in Piazza Carolina. The UNPA (National Union for Anti-Aircraft Protection) provided the rooms with an electrical system and bathrooms; moreover, most of the walls and vaults were covered with hydraulic mortar to guarantee the brightness of the spaces. In 1970 it became a Judicial Depot, where all the old vehicles and "new" motorcycles (such as Vespas) were stored, and which are now visible to many tourists. But it was only in 2005 that, with the help of two geologists (who founded the Underground Bourbon Cultural Association), the current Bourbon Gallery saw the light. Today, it is one of the most attractive places in Naples, which offers the possibility of choosing between 4 routes.

The 4 routes of the Bourbon Gallery

The Standard Route: An extraordinary tour under the cavities and tanks used as shelters during World War II.
The Memories' Way: The latest discovery located at Palazzo Serra di Cassano, where you can find objects that belonged to people hidden during the bombing.
Adventure Route: The 'Adventure Route' is one of the most enjoyable routes in the Bourbon Gallery. With the help of an expert guide, you can walk through the aqueduct, even on board a raft.
Speleo route: In this route you will have the opportunity to explore all the tunnels of the ancient aqueduct of the fifteenth century. It is also possible to visit an anti-aircraft shelter from the Second World War.
You can find more information on the official website of the Bourbon Gallery.
Seguici sulla nostra
pagina Facebook