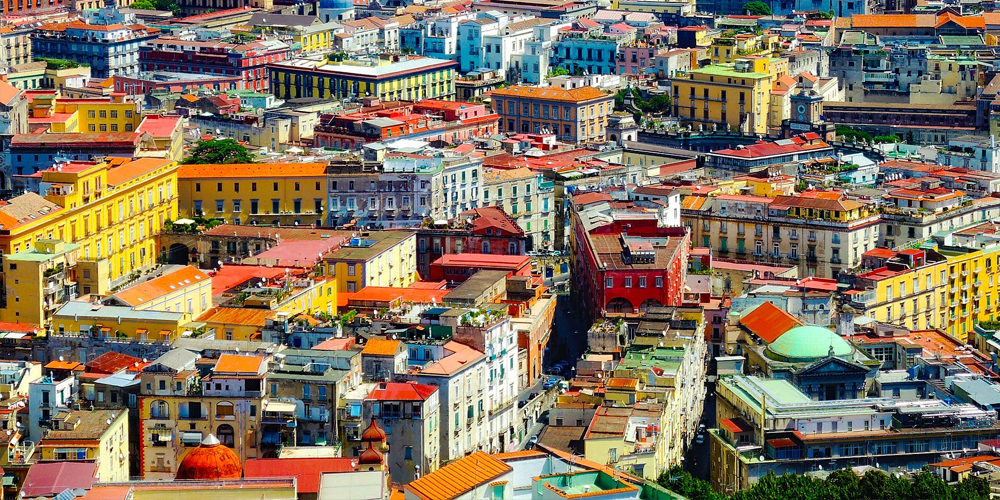 The urban plan of Naples has been well structured for two millennia, but, over the centuries, it has undergone several that have changed the conformations of some places in the city. This is the case of the winding and long roads built during the Middle Ages in the city limits or as a normal non-straight continuation of the original Hippodamian plan.

The medieval streets of Naples

The first medieval layouts of the city of Naples overlook the neighbouring area of ​​the ancient centre in contact with the old Greek-Roman layout, in particular, ​​Santa Maria la Nova square. In this area, the winding medieval streets intersect in two forks that create different open spaces (Largo Ecce Homo and Santa Maria la Nova) overlooked by various architectural episodes of the city. It is the case of the complex of Santa Maria la Nova, Palazzo Penne, the church of Santi Demetrio e Bonifacio, the square of Palazzo Giusso all'Orientale and, many others that seem almost descended from above in these winding streets that intersect and they climb between the buildings of the city.

As for medieval architecture, it has left only a few traces along these streets. Palazzo Penne remains an intact example of a Catalan house, but it is the survivor of an artistic current that the Baroque has swept away in the rest of the city.

In addition, medieval architecture captures the Neapolitan passion for the landscape, as is the case of the sixteenth century Palazzo Casamassima with its terraces and stairways open to the sea.

Development and connections of roads in Naples

Among the medieval streets, going up towards the ancient centre, we meet calata Trinità Maggiore and Vico Pallonetto in Santa Chiara. Both have an oblique trend that suggests that they were facing the entrance doors to the city (Port'Alba). Both roads lead to the monastery of Santa Chiara and its enclosure.

The outlet of calata Trinità Maggiore is a more successful result than Vico Pallonetto as it leads to a widening which is the result of several subtractions from the factories that were located in Piazza del Gesù.
What results from this square is a non-symmetrical place where the obelisk is also somewhat decentralized, ideally closing the aforementioned descent.
Moving onto Monteoliveto, Palazzo Gravina also had an open space which was then lost with the gutting on the occasion of the construction of the new post office building during the Twenties. Behind Palazzo Gravina is vico Carrozzieri alla posta which today still maintains the character of those "professional" streets, usually in the city of a few centuries ago.
Among the important medieval streets one cannot forget via San Giovanni Maggiore Pignatelli and vico San Geronimo. Both host remarkable Renaissance and Baroque palaces but Vico S. Geronimo hosts the backs of these noble palaces with often their floral gardens that populate this characteristic alley in the centre of Naples.

The grid plan of the city

Usually, the growth of a city with a grid plan occurs with the straight extension of its main streets. But this was not always possible. In fact, in Naples, the city path encountered various obstacles in its completion such as the perimeter walls of the city which were demolished only in the nineteenth century. So the newly built roads took on the appearance of twisted medieval streets, in particular those that headed towards the port of Arcina, which involved a considerable difference in height filled with ramps and terraces or roads that gently followed the course of the ground.

On the other hand, the city also extended to the west with the expansion of the major decuman up to Constantinople when it was built. Almost all the decumans and cardoons found obstacles along their way, except the lower one, the so-called Spaccanapoli. Along this place, Palazzo Maddaloni, one of the most sumptuous in the centre of Naples, was erected, as well as other buildings such as Palazzo Venezia, Palazzo Donadio and churches of considerable architectural and historical value and importance.