You can't go to Naples and not see these 3 alleys!

The alley - 'o vico in Neapolitan - from the Latin vicus, in the collective imagination it’s represented by a narrow street or path, usually secondary, bordered by houses and palaces. However, neapolitan people give a whole new meaning to the word alley which has become more than a simple secondary road.

The city has more than 100 alleys which intertwine from the old town to the outskirts. Throughout the centuries, these alleys have been given strangest and unusual names and each one reflects a piece of the city’s history; walking in the heart of Naples it will be easy to find the Alley of the Sun, the Alley of Giants, the Alley of Purgatory's Fig, the Alley of Bakers, the Alley of Peace, the Alley of Spinsters and many more.

The vico is the most recognizable symbol of city, after Saint Gennaro, the pizza and the sea. For a tourist, it will be amazing to walk along these historic streets, in which rainbows of laundry wave in the wind. There are bustling crowds, pungent aromas and shouting merchants offer fellini-esque slices of life. It’s a streaming, reverberating minestrone in which everything seems to be a backdrop for an opera not yet composed.
If you are in Naples, you cannot miss these three alleys:

1)Vico Scassacocchi (The Alley of Carriage-Breaker) is located in the historic center of Naples, between Via dei Tribunali and Spaccanapoli. There are two theories on the origin of its name: the former is that it was once the street of the carriage-breaker (scassa-cocchi) who sold hubs, wheels, and all that could be recycled from the carriages. The latter sees the origin of the name linked to the fact that its amplitude - less than two meters - would have in the past caused the breakdown of the wheels of wagons and carriages.
This alley is also quoted in the film "Napoli Milionaria" by Eduardo De Filippo, in which the character of Pasqualino Miele (played by Totò) lives on the fifth floor of number 17 of Vico Scassacocchi.

2)Vico Fresco a Rua Catalana (The Cold Alley) is located in the port area of the city. It's called "cold" because the wind rises across the sea and keeps the alley's temperature low even in warmer summers. The story of this vico started in 1343: the Queen of Naples Giovanna I d'Angiò, in order to stimulate trades, called in the city merchants and workers of different nationalities, assigning to each a neighborhood where they could live. Rua Catalana was, of course, assigned to the Catalan; it was the street of tinworker, and corkworker. Today it’s still a lab-block where you can find highly skilled artisans in the production of tin. Since 1997, Rua Catalana has returned to its former glory, thanks to the artist Riccardo Dalisi who brought together all the artisans in the area to create an open-air museum of contemporary art.

3) The vico of San Gregorio Armeno is famous all over the world because it’s the street of the nativity scene makers. Its crib tradition actually comes from Roman times: in this alley there was a temple dedicated to Cerere, the Roman goddess of fertility, to which the citizens offered, as ex-voto, small terracotta statues, produced in the nearby shops. The birth of the Neapolitan crib is naturally far later and dates back to the late '700.
In San Gregorio you can find yourself in a old-world charm, where traditional trades and forgotten lifestyles come to life in the perfect craftsmen figurines. Besides the baby Jesus, the Wise Men, and the donkey you will also find caricatures of politicians, football players, singers, actors, pop stars and many other famous characters for an original nativity scene.
In 2016, the alley of San Gregorio Armeno was transformed into a runway by Dolce&Gabbana who presented their Alta Moda collection, dedicated to Naples and Sofia Loren. 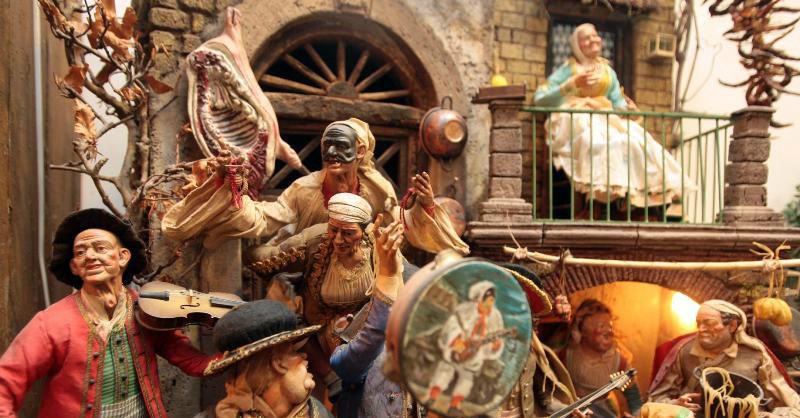