Let's discover the beauty of Caserta: beyond the Royal Palace 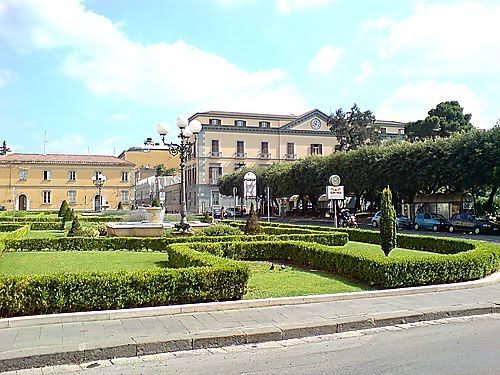 Caserta, as site of the Royal Palace, must be a luxurious and refined city. The city center, even today, has a very elegant and nice aspect, full of shops, cafés, bars, hotels and banks.

Corso Trieste is the main street of Caserta's city center. It is long 1130 metres. It starts in Piazza IV Novembre, site of the War Memorial (or Arch of Triumph): it's a white marble Arch of Triumph topped with a statue that represents Freedom and Victory. It was built during the Fascist era to celebrate the heros of the First World War.

Continuing straight through Corso Trieste, we meet Piazza Dante (or Piazza Margherita), one of the oldest squares of Caserta, considered the "city's living room". It has a symmetric shape, made of four buildings with nice arcades all equal that host an old cafè and the offices of Social and National Club.

The street ends up in Piazza Carlo III, where is the Royal Palace. It is one of the largest square of Europe, larger than piazza San Pietro in Rome. Before the square was intersecting by roads open to vehicular traffic. But in the last few years, it has undergone several renovations, in order to make it come back to the original Vanvitelli's project.

Another main square of the city is named in his honor: Piazza Vanvitelli, indeed, where is Palazzo Vecchio or Palazzo Acquaviva, the old house of Caserta's Counts and Lords. Also Carlo III Borbone lived provisionally in this house, till the finishing of his Royal Palace. Today it is the headquarter for the prefecture and the police offices of Caserta. Also notable in the square is the Italian Bank's Palace: a building characterized by a triangular pediment containg a big watch on the top. Piazza Vanvitelli is formed mainly by a large municipal villa with at the center a monument in honor of Luigi Vanvitelli and a big fountain. The Luigi Vanvitelli Monument was made by the sculptor Onofrio Buccini and inaugurated in 1879: it represents Vanvitelli indicating the Royal Palace with his right hand and holding his projects with the left one.

In Caserta there is the Vanvitelli's house too. It's called Palazzo delle Quattro Colonne (Four Columns' Palace), on a stretch of corso Trieste. It was built in the 18th century and owns the name to its facede with four columns (two on each side). Vanvitelli lived here for over twenty years until his death.

Duomo and the Cathedral of Saint Michele Arcangelo in Caserta

The arrival of Bourbons certainly changed the logic of the city. Today Caserta's two most important churches are dedicated to the Archangel St. Michele: the Duomo of Casertavecchia and the New Cathedral.

The Duomo of Saint Michele Arcangelo is the most important worship place of Casertavecchia, till 1841 the cathedral of the diocese of Caserta. Undoubtedly, it's the most beautiful and important building of the city. It has been built in 1113 by Bishop Rainulfo and finished in 1153. It represents one of the best Romanic architectural work in Campania. It has a great artistical and historical value because it was built in different styles: Sicilian, Norman, Arabic and Romanic stlyle. The sloping facade has three large portals with zoomorphic sculptures. The southern facade is decoreted with marble lozenges, while the other side with elliptical shapes. Between 1206 and 1216 the transept with three spans was added. The cupola was erected after one century, around the half of XIII century, and has Sicilian-Muslim influences that are common to the Salerno's Cathedral of the same era. The Church's inside has a Latin-cross plan where three naves are separeted by 18 columns of perusal topped by round arches. You can access in the transept through a pointed arch, the apse area is articuleted in three apses. Upon the altar there is a wooden crocifix from the sixteenth century. The columns capitals are all different from each other, because they come from different previous Roman buildings. Inside the little fourteenth Chapel the frescos still intact and in an alcove on the perimeter wall of the church there is the polychrome sculpture of Maria Santissima Regina. Between the nave and transept there is also an intact Sienese fresco of the fifteenth century that represents the Virgin and Child.

The Cathedral of San Michele Arcangelo, known also as duomo, is the current bishopric of Caserta. The cathedral is in the irregular Piazza Duomo in Caserta. The building was built on a previous church dedicated to Annunziata (1300), that used to be part of the Convent of the Carmine. In the centuries it has been renovated many times: now it has a merely baroque style. The main facade has a large stone staircase from Bellona and is articuleted in two orders. The two alcoves in the high part of facade there are the plaster statues of St. Michele Arcangelo on the left and St. Sebastiano on the right. The three doorways lead to a three-aisled nave separeted by columns. The main nave's cover consists of drawers decoreted in stucco. Between the nave and transept there are many paintings from 16th century. Instead, the apse's area is frescoed with the table of Twelve Apostles and some biblical episodes. Just below the apse there are the crypts: a system of old and modern spaces, recently redesigned and restored, where there are archaelogical remains, artwork of contemporary artists, dicesan bishops' tombs and, in particular, in a large metal ark, a terracotta tile engraved with the sign of the cross by Pope Giovanni Paolo II, that signed it during his first apostolic visit in the Caserta's cathedral. The underground path of the crypts ends up in a small garden with pergola where people stop and pray.

Casertavecchia: power center before the Bourbons

Casertavecchia is a medieval village on the sloples of Monti Tifatini, a few miles away from Caserta. Its origins are still uncertain. We only have a few information about it by some notes of a Benedictine monk: already in 861 A.D. there is talk of an urban core called Casa Hirta (from Latin: "village on the top").

Throughout the Middle Age till the half of the 15th century, Casertavecchia was the center of the political power and citylife. At the times of Saracen raids, it used to be a place of refuge for the inhabitants and clergy of the surrounding area.

In the centuries there were many rulers. The town was at its maximum splendor during the Norman domination with the construction of the Duomo. Contrary, during the Aragonese domination, the town starts its long and progressive decadence: only the bishop and the seminary remained in Casertavecchia, while political and city life moved to Caserta.

With the Bourbons' arrival and the construction of their Royal Palace, Caserta became the new center of all activities at the expense of Casertavecchia, that in 1842 also lost the bishopric.

In 1960, Casertavecchia was designated an Italian National Monument. From that moment the village became a tourist attraction. Duomo, bell-tower, remains of the castle and streets of the village remember the splendor of a time that was.

Often center of folk events, in Casertavecchia there is a legend abaut fairies and its Cathedral. It's told that the fairies of mountains helped to finish the construction of the church.

Proof of the fascist regime in Caserta, in addition to the War Memorial, is the Casa del Fascio. It was built in 1937 and in a first moment designed to host the Fascist Confederation of Agricultural Workers. Then it became officially Casa del Fascio, hosting the offices of the regime.

In 1945 we have the Surrender of Caserta, the written agreement that formalized the surrender of German forces in Italy, ending the Italian Campaign of Second World War. In this period, Caserta is one of the cities decoreted with the military value for the war of liberation. It was awarded the gold medal for civil merit and the bronze medal for military value for the sacrifices of its population and the activity during the partisan struggle.

During the last years, the Ex Casa del Fascio has been restyled. Now the building hosts a restaurant, a beauty farm and a design center on the ground floor, while on the upper floor some offices.

What to see in Caserta: beyond the Royal Palace there is more

Caserta is located 36 km from Naples. The city is mainly known for its 18th-Century Royal Palace that is a UNESCO World Heritage Site. But Caserta, called Versailles of Italy, also has other places and monuments of which it's worth to speak about and know their history, if you go to visit the city.