Naples metro: the wonders of the art metro station

The most beautiful underground stations in Naples

Among its wonders, Naples has one of the largest free and public access museums around the world: the stations of line 1 of the underground. The result is the so-called art Metro line (together with some stops on line 6) in which stations, designed by great architects, and installations by world artists coexist daily. Most of these works are accessible every day as we move through the city. The art metro stations are currently 15 and collect about two hundred works of art.

The underground network that connects the city centre and the neighbouring suburbs is still being expanded through new stations but has already received numerous international awards. Let's find out together the most beautiful stations to visit.

Vanvitelli station on the edge of the Vomero district 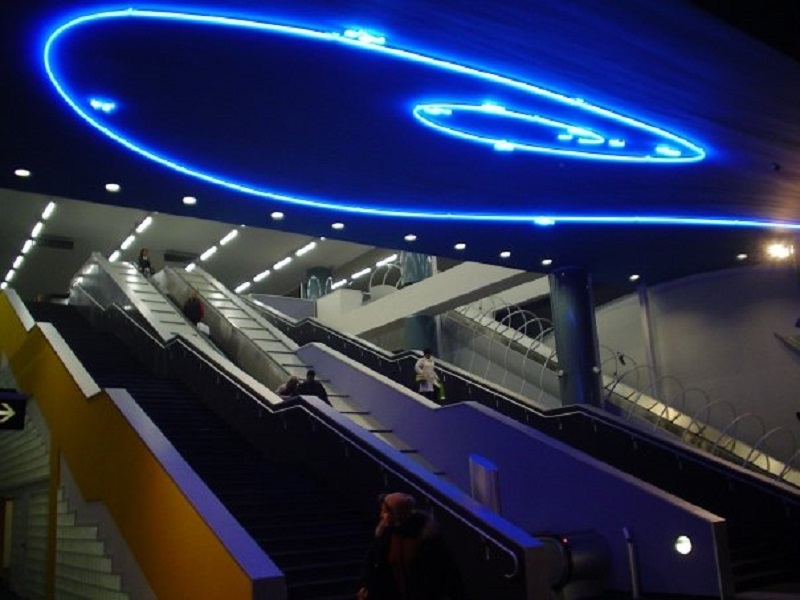 The Vanvitelli station was completed in 1993 on a project by the well-known Neapolitan architect Michele Capobianco. In 2004 it underwent a restyling by Capobianco with the artistic support of Achille Bonito Oliva.

The hilly subway stop has the entrances in all four corners of the homonymous Piazza Vanvitelli. Various installations characterize entrance space. What strikes our attention most is the boulder that creates the illusion of breaking the glass enclosure that holds it by Giulio Paolini, followed by the magnificent luminous spiral by Mario Merz, which recalls the succession of the Fibonacci series that accompanies us to the quay, where you find two mosaic artwork by Isabella Ducrot.

The Quattro Giornate station dedicated to the Neapolitan revolution

Quattro giornate is the subway station dedicated to the days of the rebellion of the Neapolitan people against the Nazi occupation. Initially, the name of the architect D. Orlacchio's project was "Cilea" but since 2004 the name was changed to honour these days of revolution that started the liberation of Italy from the fascist regime. After this choice, the entire structure was decorated with installations and photographs that recall those glorious days.

Among these artworks, you will find the Sequenze di guerra e di caccia by Sergio Fermariello, a well-known Neapolitan painter and sculptor, together with the bas-reliefs and paintings by Nino Longobardi. It is the only station that has two well-separated platforms for the two directions to be taken, so be careful not to let yourself be confused by the other artworks such as one of Betty Bee, Baldo Diodato, Umberto Manzo and Anna Sargenti who deal with themes universal compared to those of the aforementioned war.

The Materdei station, by Atelier Mendini, until the construction of the Toledo metro, was probably the most beautiful of the Neapolitan metro stops. Alessandro Mendini was one of the most respected architects in Italy and the world such as the Daily Telegraph included his station among the top 20 most beautiful metro stations in Europe.

The station is in a less known area of ​​the city, within the homonymous district of Materdei. It became a focal point, thanks also to the redevelopment of the square above, in which the mastodontic pyramid of glass and steel by Mendini himself stands out. The pyramid serves as a skylight for the station's artwork. There are works of famous artists such as a mosaic by Sandro Chia, a high-relief by Luigi Ontani and works by Solomon LeWitt under the marvellous light of Mendini's pyramid.

A metro stop in the historic centre: the Museo station

The Museo station is an important hub of the Neapolitan railway line, but it is also a hub for the historical memory of this line. The Museo station recalls in style and colours (Pompeian red) the National Archaeological Museum of Naples (MANN) under which it is. The project was carried out by Gae Aulenti, an Italian architect, very famous so much so that she won the prestigious Tokyo Imperial Prize.

The station opened in 2000. Gae Aulenti was an architect very sensitive to architectural restoration and the historical memory of an artefact, creating entrance pavilions in concrete and steel that house some copies of the artworks in the MANN.

Historical memory is a fundamental element of this stop so much so that from the upper entrance, after passing the copy of the Laocoon and the photographic reproductions of Mimmo Jodice, you will find the Neapolis Station, an exhibition that collects all the relics found during the metro throughout Naples.

Dante Station: the redevelopment of a historic square 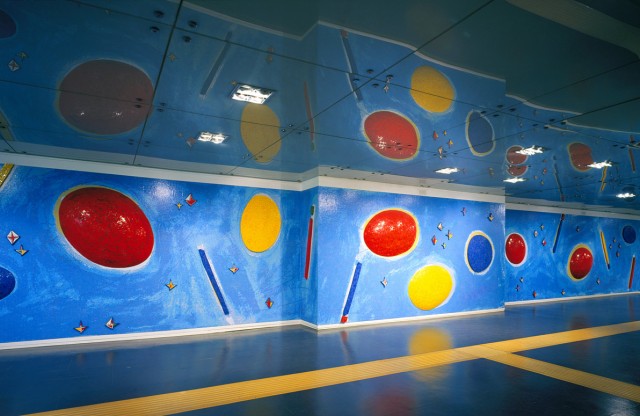 The Dante station is part of the redevelopment process of the entire Piazza Dante. The station looks like two corner pavilions in glass and steel that frame the gigantic statue of Dante.

Important Neapolitan, Italian and foreign artists exhibited some artworks under the street level. They include Jannis Kounellis, author of Senza Titolo, an installation with small beams behind which is placed among other things shoes, a coat, a hat, and Joseph Kosuth that installed a long neon with a piece from Dante's Convivio entitled Queste cose visibili.

Among the other artists stand out Nicola De Maria, Carlo Alfano and Michelangelo Pistoletto, author of Intermediterraneo, a work in which the profile of the Mediterranean basin is traced.

Toledo Station: one of the most beautiful metro stations in the world

Usually, the dulcis arrives in fundo but this time no. After the Dante station, we meet the Toledo station is the most beautiful station in Naples and beyond. In fact, since its opening in 2013, it has received awards and prizes all over the world, so much so that it has been named the most beautiful metro in Europe and the world according to the Daily Telegraph and CNN.

Designed by the architect Oscar Tusquets, it manifests its presence on the outside with three polygonal structures covered with blue (sea) and ocher (tuff) tiles that act as a skylight. Inside, the structure is characterized by large mosaic surfaces from the inspiration of William Kentridge and Costantino Aureliano Buccolieri. The mosaics often represent scenes of Neapolitan life, full of people, including San Gennaro, scenes of Pompeian life and Vesuvius.

Immediately after the first room dominated by the ocher colour of the mosaic covering you pass into the sea gallery by Bob Wilson. The first room is completely mosaic with marine motifs. Other rooms are decorated with photographs taken by Oliviero Toscani depicting the faces of Neapolitan citizens who wanted to participate in the initiative.

The Municipio station from the archaeological excavations in Piazza Municipio

The Municipio station is one of the last to be built in Naples and is not yet fully completed. The entire urban layout is designed by two world-famous architects Alvaro Siza and Eduardo Souto Souto de Moura.

Inside the station, in the connecting corridor parallel to the Maschio Angioino that will connect Piazza Municipio to the Beverello dock, a permanent museum area will be set up with part of the archaeological discoveries found in Piazza Municipio.

The structure is in the style of the two architects with large white surfaces alternating with the use of living stone, which through its pattern gives the space a naturally historic atmosphere.

Most of the archaeological discoveries will be restored and left in the place where they were found, among these, there are 5 roman ships creating a real archaeological park in the city. The discoveries were on the agenda so much that the project was changed 27 times.

Colours and three-dimensional effects: the beauty of the University Station

The Università station was built by the same architect as the Materdei station, Alessandro Mendini with the support of the designer Karim Rashid. The entrances are located in Piazza Bovio, the seat of the Palazzo Della Borsa in Naples and already by entering it you will notice its first peculiarity, being covered with white tiles with the words that have been invented in recent years.

Inside it is presented in Rashid's digipop style, very eclectic and who prefers very bright colours. In fact, at the University stop the most used colours are fuchsia and acid green.

Even the sculptures designed by the same designer are very suggestive like Synapsi which wants to remember the neural network of the human being. Another work is the conversational profile, which are pillars decorated with an infinite profile by Rashid himself.

In other areas of the station, optical games and three-dimensional stereoscopic effects decorate the station.

Garibaldi station was designed by the French architect and urban planner Dominique Perrault and inaugurated in 2013. The focal point of this stop is the large underground shopping arcade.

A long steel pergola made a roof with perforated Teflon panels that create a sort of artificial forest. The long steel pillars recall the trees while the Teflon sheets allude to the tree crowns.

Upon entering the station you will notice a deep pit where escalators cross suspended in the void. Almost at the level of the docks, there are two artistic installations by Michelangelo Pistoletto.