The Rione Sanità between history, films and the essence of the tradition of Naples

The Rione Sanità in Naples

For years excluded from the traditional tourist itineraries. In Rione Sanità we will find an authentic heritage of "Neapolitan spirit". It represents all contradictions of Naples.

It is part of Stella quarter. It is located North of viceregal walls of Naples and precisely in North of Borgo dei Vergini at the foot of the Capodimonte hill. It starts from Piazza Vergini and includes the area of Via Sanità, Piazza Sanità, to the area of Saint Gennaro Hospital called of Poor.

Rione Sanità, before its current viability, was a place of meeting between life and death. Since Greek and Roman Times its valley used to be a burial place: stood Hellenistic Ipogeos and early Christian catacombs. So from the very beginning there is a close link between man and death, a link that will last forever. A proof is the Cimitero delle Fontanelle, used to host the victims of Great Plague in 1656.

Its name is due to the excellent quality of air in 1500 that used to make it one of the most uncontaminated areas of Naples with its "salubritas" (fresh air), because of the surrounding countyside and the catacombs where miraculous cures occured. There were also an hangmen's lazaret, widely used during the plague in 1652, that is now the Saint Gennaro dei Poveri Hospital.

Rione Sanità is currently one of the working-class areas of the city, but at the beginning the target was to built a noble and bourgeois district. Architectural examples are the elegant Palazzo dello Spagnolo and Palazzo San Felice.

In 18th century the streets of Rione Sanità became the Royal Family's route. It used to start from the city center to Reggia di Capodimonte. Because the route was particularly tortous, it was considered necessary to build a direct connection via a bridge. In a way, it caused the isolation of the area by giving a sense of "outskirts in the Center of Naples".

I was born in Rione Sanità, the most famous of Naples.
Totò - Antonio De Curtis

The Sanità's Bridge contains the "spirt" of the whole Rione: apparently suburb but in truth Center of Naples. There could not be a bigger contrast!

The Sanita Bridge, also known as Maddalena Cerasuolo Bridge, is the first thing that you see when you arrive in Rione Sanità: it passes on all the surrounding houses and buildings. The works for its construction started at the beginning of 19th century with Giuseppe Bonaparte and went on with Gioacchino Murat.

The result was remarkable for the road traffic, but terrible for the borough that day by day became increasingly shut out from the city life and known, for the Neapolitans themselves, as dangerous area of the Mob.

So during the years we have worked to redevelop the artistic and human heritage of the area. In a way the isolation has helped to preserve typical traditions and spontaneity of Rione, not contaminated by the busy city life.

Walking on Rione Sanità means: people around at any time, music that can be heard in the alleys, smells of meat sauce and aubergines. Put aside worries and doubt, and trust to Suburb, you will be welcome!

What to see in Rione Sanità

Rione Sanità is an open-air museum and rush of pure Naples. Only driving around the neighborhood without a real tour, you will discover fascinating spots. But the things to see are a lot and all of them are worthy.

Borgo dei Vergini in the Sanità district in Naples

Borgo dei Vergini (the quarter of the Vergini), also known borgo barocco (baroque hamlet) for its architectural style, is the first place that you will meet (coming from via Foria) before entering the proper Sanità.

It is a very lively area of the city, composed of via dei Vergini, location of one of the most popoular open-air markets of the city, where it is possible to buy various things.

The Borgo's name originetes from the Greek religious brotherhood that used to live in the quarter: Eunostidi (a community of "virgin" men devoted to temperance and chastity).

Walking inside the Borgo you can see some of the most important palazzi and baroque churches.

The palazzi of Rione Sanità 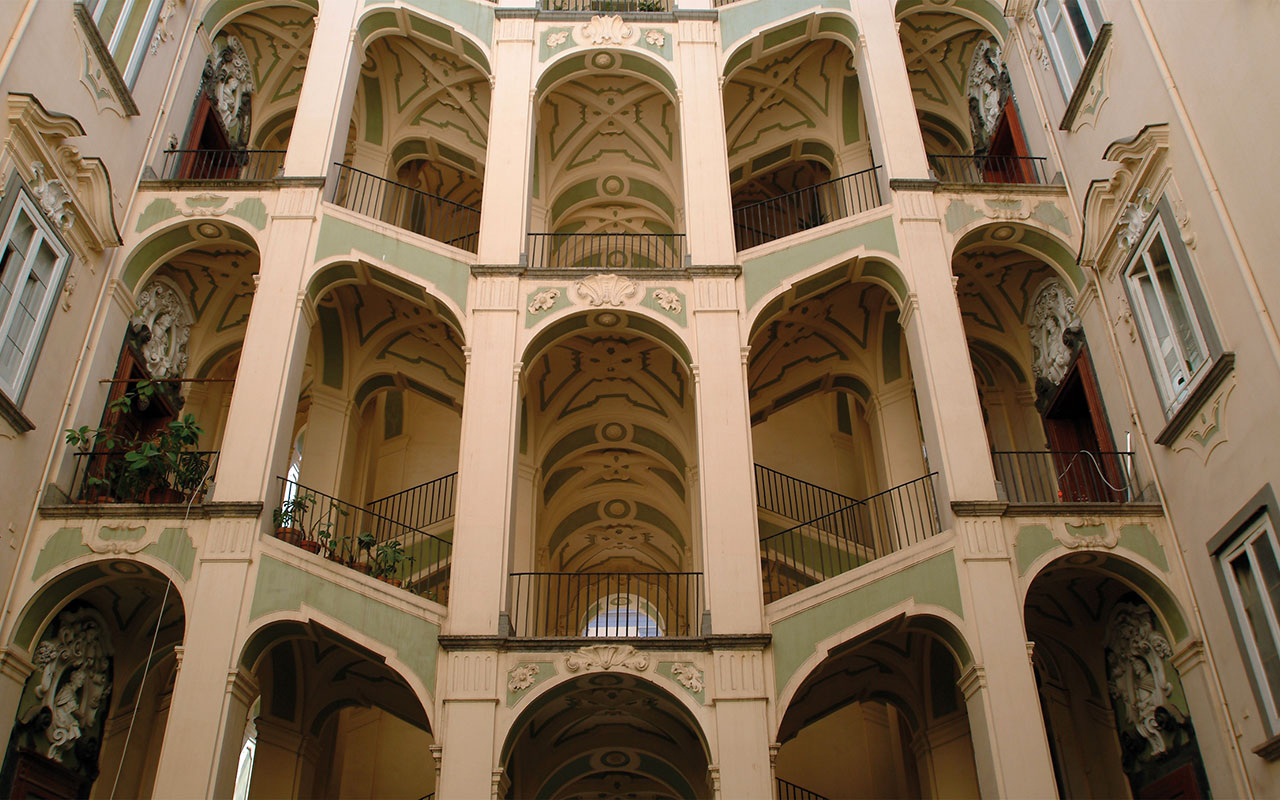 In the square of Borgo dei Vergini, hidden among the market stalls, there is the famous and beautiful Palazzo dello Spagnolo (Spanish Palace).

At the beginning it was property of Moscati family that, after going bankrupt, sold the building to Tommaso Atienza, known as "the Spanish man". That is why the name!

Now the building is private and you may not access it, but if you ask politely to take a picture, they won't deny permission.

It was built in 1738 by Ferdinando Sanfelice, the same of the near Palazzo Sanfelice, very similar to Palazzo dello Spagnolo, but less rich.

Palazzo Sanfelice is famous for its stairwells, rich of arches and architectural innovation that give a feeling of lightness. The point of view changes at every staircase, so I suggest to not limit yourself at just looking from the court.

The undergrounds of the Rione Sanità: the catacombs 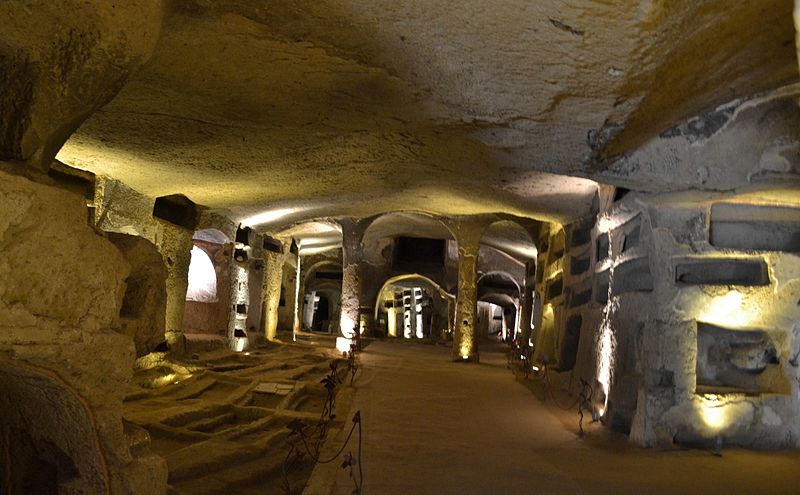 From the catacombs we enter in the "subterranean rione". A few metres below street level there is a real underground city.

The Catacombs of Saint Gennaro and Saint Gaudioso and smaller Saint Severo are proof of the link between the city and Christianity. They are real underground cemeteries, where East meets West and the sacred and the profane.

In Saint Gennaro's Catacombs you don't find only history and beauty, but also the willpower of Naples. These catacombs were abandoned, then in 2006 the kids of the neighborhood, under the guidance of the parish priest, father Antonio Loffredo, have cleaned, re-arranged and trasformed them in an excellent tourist spot.

Differently by Roman Catacombs, Neapolitans Catacombs are spacious and with large rooms. There is a good ventilation and the ride is easy for the children too. The temperature is around 15-22 degrees. The tour is divided on two levels: there are around three-thousand tombs, including Saint Gennaro's tomb.

The Churchs of Rione Sanità 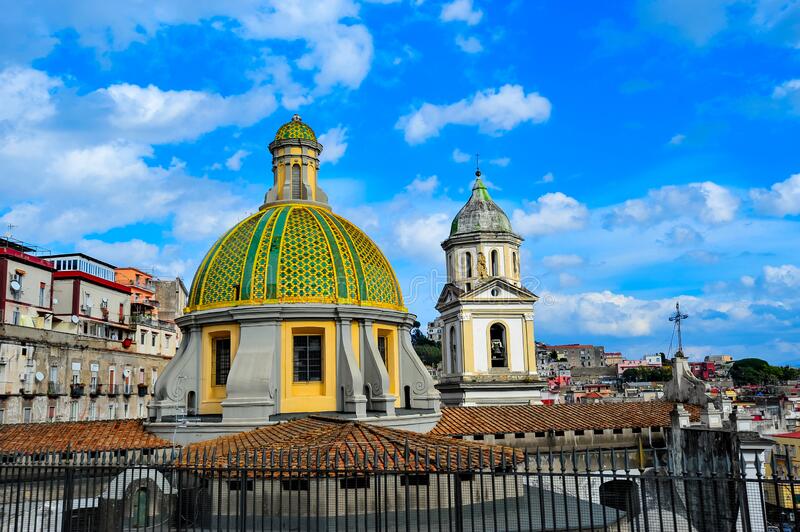 Conjunction between terranean and subterranean Rione are its churches, entrance to the catacombs.

We start from the paleochristian basilica of San Gennaro Extra Moenia. After years of neglect, it is back to be available to catacombs' visitors and cultural events.

The Rione's heart is undoubtedly the baroque basilica of Santa Maria della Sanità, access to San Gaudioso's. It is recognizable by its dome with yellow and green majolica, visible from Sanità's Bridge.

Inside the church you can admire works of great interest. Wonderful is its pulpit: quite central in the cathedral, with an eye-catching Broque monumental staircase that leads to the apse area where there is a crypt, first original center of the holy place.

The church is dedicated to Saint Vincenzo, also known as the Angel of the Apocalypse, depicted with wings, trumpet and the Biblecal book. In the central nave of the Saint there is a statue with real wings, highly venerated by believers.

In a chapel next to the altar there is the Madonna of Sanità too, the oldest representation of the Virgin in Campania (5th - 6th century).

We leave the catacombs to go to the Fontanelle cemetery. It is famous for the huge quantity of bones. Originally, it wasn't a burial place but a tuff quarry that, after extraction, was abandoned in 1600. The name "Fontanelle" (fontains) comes from the past, when in this area there were many natural fonts.

After the plague in 1656 and the cholera in 1826, all the cemeteries of Naples were full. So they exhumed some bones that were relocated and shelved here in Fontanelle.

Transmuted in cemetery, this huge ossuary began to attract many believers that arrived to pay respect to the ancestors. The strong superstition of local culture developed the "capuzzelle" belief, which is about how the skulls of the deceased could bring good luck to the person who would take care of it.

And thus, the cult of "anime pezzentelle"  was born. It involved the adoption and care of one of the "abandoned skulls" in exchange for graces. Once you choose the skull to adopt, you had to clean and take it in a case or box. The soul of the chosen skull and who adopted it communicated through dreams: the dead asked prayers in exchange for graces or Lotto numbers.

Some of these skulls have even become famous. That is the case with: the couple, that lay in the same glass covered coffin; the Crying Concetta, a skull that often is full of water droplets, interpretated as her sweat for the stress to please all the prayers; in the end the Capitain with his eccentric exploits.

I suggest to visit the Fontanelle Cemetery with a guide. This way you will know more about the events and the history of the place.

Rione Sanità, as the rest of Naples, is strongly connected with the artistic and cinematographic world. Here were filmed some of the most famous Italian movies, as: L'Oro di Napoli (The Gold of Naples); Ieri, oggi e domani (Yesterday, Today and Tomorrow), and some scenes from season 3 of Gomorra.

In Sanità "the prince of laughter" Totò was born. He lived here until he was 24, than moved with his family in Rome. The house is in number 109 of via Santa Maria Antesaecula. For some time already, the building has been private property, but even just to walk by is a great emotion.

About Totò, we can't forget the Nuovo Teatro Sanità, a theatre made inside an eighteenth-century church abandoned for years. This theatre, besides its beauty, is an important meeting point for the youth of the neighborhood.

In Rione Sanità it's possible to feel the "real Naples" and at the same time a strong internationalism. It's a suburb that believes in its human resources and with a desire of redemption and beauty. For example, its graffiti, that are increasing day by day, are a signal of value and hope.

In coclusion, Rione is basically "a city into the city". A set of realities that you shouldn't miss, if you decide to visit Naples.