The 16 municipalities of the Amalfi Coast: beauty from the mountains to the sea

Here nature and history mix themselves and give rise to a combination as unique as precious. In 1997, UNESCO has included this stretch of coast in its List of World Heritage Sites, because it is an example of the Mediterranean landscape of great cultural and scenic value resulting from its topography and historical evolution.

The variety and beauty of this Campania's peninsular tract leave people astonished and keen to better know its villages. Every one of these has something of special. The landscape is characterised by sea and mountains, full of bays and inlets often accessible only by the sea.

Amalfi Coast: history of one of Maritime Republics 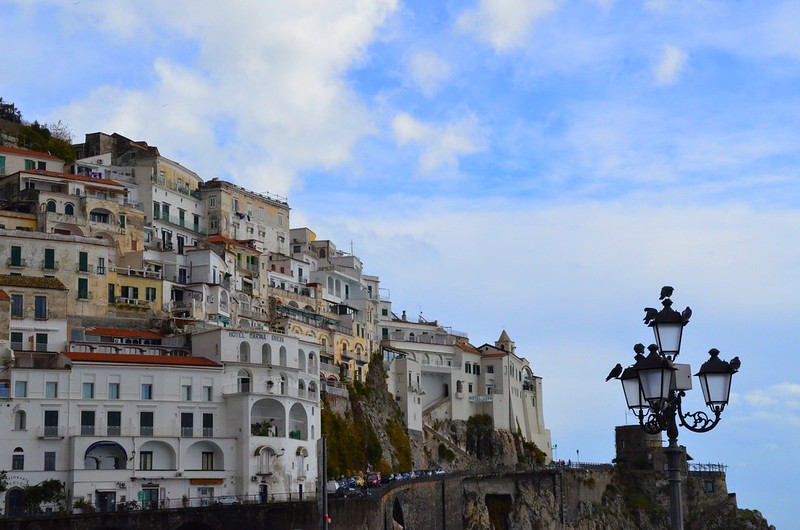 In the beginning, Amalfi Coast was a poor place because of its location and geology. It was an area well protected by the mountains and with the only outlet to the sea. Through its trade and the making of terracing used to cultivate, there were the first residential areas.

In the Early Middle Ages (IV century), Amalfi was founded. It was contended among Byzantium, Benevento's Longobard and Naples' Duke. Amalfi developed till to become independent Maritim Republic in 839 A.D.

Amalfi will play an important role, particularly in maritime traffic. It will be the first among the Maritim Republics to have contacts contemporary with Spain, Egipt, Assyrian-Palestinian Coast, Bisanzio Empire and the Romanesque-Germanic West. It was the first one to import paper and spice in Europe.

Evidence of Amalfi's glorious cultural and artistic past

The glorious Maritim Republic of Amalfi has bequeathed historical monuments that have characterized indistinguishably the local art.

One of the most famous monuments in Amalfi is the Cathedral of St. Andrea. It arises at the end of a steep staircase and overlooking Piazza Del Duomo, at the centre of which the 18th-century Fontana Del Popolo.

The church is the result of a complex and stratified building with an earlier Romantic style and a later Islamic-Byzantine style. The front is covered by 19th-century polychrome majolica, which makes it similar to Cordoba's Mosque. It is no coincidence, because of the many Republic of Amalfi's trade with the Arabic of Spain. Instead, the interior is in Barocco style but remodelled several times.

From the Duomo's inside, you reach the Chiostro Del Paradiso: a delicious Arabic-style building, the centre of which a lovely inner garden. This continuous fusion of architectural elements from different people and ethnic groups creates an own style, called the Amalfi style.

Another architectural heritage of the sea power of Amalfi is the Arsenale: a big building with suggestive stone salons with a pointed barrel vault. The left shipyard is about half of what used to be in the Middle Ages.

In the Arsenale, there are the Tavole Amalfitane, a code where is collected the sea right that used to be acted during the Middle Ages.  Here we find also the first compass that appeared in Europe and was improved by the Amalfitan Flavio Gioia.

Why Ravello is the city of music

Ravello is a wonderful village composed of alleys, gardens and historic villas. It's known as the City of the Music because every year there is a prestigious international music festival that made it famous all over the world.

The heart of Ravello is Piazza del Vescovato, the square where there is the Duomo, full of precious artworks, and the entry tower of the wonderful Villa Rufolo. The villa dates back to the 5th century and was a property of the powerful Rufolo family and since the 19th century of the Scottish Francis Nevile Reid. Around the villa, there is the magic Garden of Klingsor that was beloved by the musician Richard Wagner.

Positano: a place for celebrity holidays

Positano with its white houses that sloping down to the sea is a pleasant place.

Since the post-war, with the arrival of celebrities, it has become a famous luxury holiday place. The discovery of ancient Roman Villas attested to a "leisure" conception already at that time.

It is typical for its little streets full of workshops where you can buy local handmade products and its "stairways" that from the town arrive in the beach.

The art of majolica in Vietri sul Mare

Vietri Sul Mare is a characteristic small town that seems to be confused with its rocky landscapes. It is a group of houses clinging to limestone ramparts falling over the sea, that make Vietri an amazing country.

Vietri Sul Mare is particularly famous for its art of ceramics, the typical majolica. There are many small artisanal factories in every corner of the little town. They enrich with colours a landscape already wonderful itself. The majolica decors the domes of the most important churches of Amalfi Coast.