Esoteric tour of Naples: places and legends to know

Naples is not just about the sea, breathtaking views and delicious food. As is well known, the city is also a burrow of history from every era and timeless charm.

Shrouded in mystery and full of secrets to discover, Naples is known worldwide for its esoteric appeal.

Stories and legends that challenge the popular imagination, fascinating places that tease the distrust of skeptics, if you love mystery in Naples you will meet your match.

Today we want to offer you a little tour of esoteric Naples by introducing you to places and tales (have you ever heard about the "Munaciello," a two-faced legend with an all-Neapolitan flavor?) that will leave you breathless.

We will start our journey precisely with the legend of the Munaciello. We will continue with an in-depth look at the famous Neapolitan alchemist Raimondo di Sangro. We will end the journey with a visit to the underground of Naples, passing through the Naples Underground.

The many faces of the Munaciello: the Pozzaro of the undergrounds of Naples

O' Munaciello in Naples is a legendary and mystical figure in the city's tradition, whose profile would correspond precisely to a small monk with a habit, sandals and silver buckles.
Of course, there is more besides the ecclesiastical aspect.

Around the origins of the Munaciello, as many as three theories hover, one different from the other. However, our focus is only on one of them, namely that of the "pozzaro." The Munaciello would in fact have been the ancient manager of the city's water wells, hence the name, and thanks to his being small in stature he was able to penetrate into houses by crossing the canals whose function was to lower the bucket.
However, when as was often the case the pozzari were not paid by their patrons, the latter rebelled in their own way. In fact, their revenge consisted in entering the homes of powerful lords by going and stealing and making their own the many precious objects they found. Such rich relics that the pozzari cunningly went to take, then were given as gifts to their mistresses. And that is why the Munaciello is said to "sometimes give, sometimes steal."
According to belief, the Munaciello would continue to wander underground passing through the city's ancient buildings, causing misfortune and misfortune. One of the buildings allegedly haunted by his spirit is Villa Gallo, a 15th-century historic building located in the Colli Aminei area.

Prince Raimondo di Sangro and the Chapel of San Severo 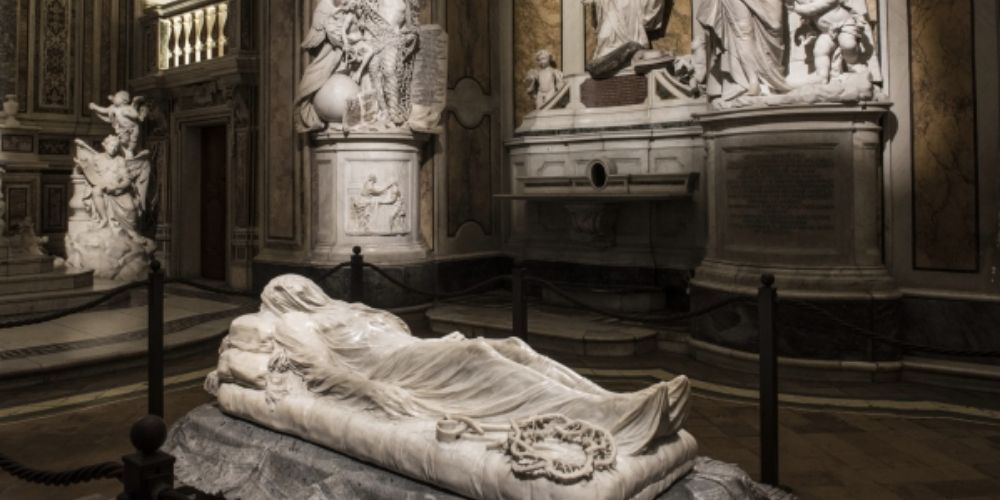 The tour to discover esoteric Naples cannot fail to stop at the San Severo Chapel.

The Chapel of San Severo, among the most important museums in Naples, is and will forever be linked to the figure of Prince Raimondo di Sangro, a mysterious character of 18th-century Naples.

About him, who was among others an alchemist, man of letters, inventor, writer, anatomist and whatnot, there are so many rumors and legends, fantasy stories of irresistible fascination.

Around his mystical palace traveled through the air intermittent flames and infernal lights, while at night it was heard like the beating of an anvil taken vehemently by hammering. Surrounding the figure of Ramon is indeed a black legend with macabre and dark implications. In fact, the Prince allegedly killed seven cardinals in order to build seven chairs with their bones, while their skin served to cover the seats.
It was said of him that he knew how to reduce marbles and metals to dust, and thanks to this skill the alchemical process of "petrifying" the veil of Christ in the Veiled Christ (Cristo Velato) takes shape. He also allegedly blinded the author of the masterpiece, namely Giuseppe Sanmartino, so that he would never replicate for others a work of such magnificence.
Finally, how can we fail to mention what would lie behind the fantastic and evocative work of the "anatomical machines," where we see our Prince as the protagonist once again. According to legend, the two bodies used for the work would have been two of his servants. They would be a man and a pregnant woman, killed to experiment with new methods for embalming. On the corpses careful anatomical studies would then be made by Ramon and a doctor, with special attention to the circulatory system.

Naples Underground to be experienced and discovered The last stop on the esoteric tour of Naples is, as anticipated, Napoli Sotterranea, a unique place in the world that will allow you to visit "the other Naples", the one that literally lived (and still lives) on the underground.

The history of the underground passages of Napoli Sotterranea is very ancient. The first to dig underground to extract tuff for construction were the Greeks, who thus generated the first underground environments. Later the Romans, taking advantage of the work already done, continued to dig the tunnels, mainly for hydraulic purposes.

Throughout the history of Naples, the underground passages and tunnels were exploited for various purposes, such as air-raid shelters during the bombings of World War II for instance.

Napoli Sotterranea is also linked to many legends and mysteries, including the one already mentioned of the Monaciello, who allegedly used these tunnels for his mischievous "pozzaro" work.

There is no doubt, then, that this underground place that capillary winds under the entire city, reaching almost everywhere, has also served anyone in the history of Naples who needed to hide something or themselves.

Napoli Sotterranea is therefore a definitely mandatory destination for anyone who wants to delve into the city's most obscure history, while also discovering numerous traces of esotericism and mystery surrounding it.

There is only one official authorized route for the tour and it starts from Piazza San Gaetano 68, a location located on Via dei Tribunali. The excursion through the fascinating Greco-Roman history of Naples will last about an hour and a half.
Seguici sulla nostra
pagina Facebook