The historic centre of Naples: a UNESCO World Heritage Site since 1995

In Naples, the largest historical centre in Europe

The historical center of Naples is the largest in Europe. It contains within it treasures, artistic, architectural and historical beauties that range from the Greek era, the Roman era. Up to the Spanish period of the reign of the Bourbons. Stories and traditions that date back to the seventh century BC. The beauty and grandeur of the historic center of Naples earned it recognition as a UNESCO World Heritage Site in 1995. The air that is considered a UNESCO World Heritage Site covers 1021 hectares and contains a number of: Avvocata, Stella, Montecalvario, Porto, Pendino, Mercato, Chiaia, San Giuseppe, San Lorenzo, San Carlo all'Arena, Vicaria and San Ferdinando. To this we ask ourselves, but what is a Unesco World Heritage Site?

World Heritage Sites are all those particular sites that deserve to be protected by the World Heritage Convention. The Convention on the World Heritage of Humanity has drawn up a list, which in its English exception is World Heritage List, within which are included all the particular sites that deserve special protection. The World Heritage Convention in order to identify all those particular sites of the world that are characterized by a particular exceptionality from a natural or cultural point of view and that consequently deserve a specific protection is a specific recognition. The General Conference of UNESCO, the body that adopted the World Heritage Convention, has drawn up a list of criteria to be followed for the inclusion of sites within the convention, so that they can be recognized as World Heritage Sites. According to the last update made in 2019, there are currently 1121 UNESCO sites that are part of the World Heritage Sites. Italy and China are the only two nations in the world to have more sites included within the World Heritage list: both with 55. There are two criteria for the selection of UNESCO sites: natural criteria and cultural criteria. Therefore can be included in the list of UNESCO heritage sites both entire historical centers such as Naples, and individual monuments, or architectural or artistic works such as paintings or sculptures. The historic center of Naples officially became part of the World Heritage Sites in 1995 thanks to its unique characteristics. In fact, we can find ancient churches, basilicas, archaeological excavations, universities scattered throughout the center, ancient stores, alleys and narrow streets dating back to the Greek era. The historic center of Naples is a place where time seems to stand still. A place where you can breathe a magical air. A place that deserves to be seen at least once in a lifetime by anyone who decides to make a stop in the Neapolitan city.

The historical center of Naples and the decumani

The historical center of Naples is very articulated but very easy to travel because it recalls the classic checkerboard style. Naples is in fact divided into three Decumani: the Upper Decumanus that goes from Via Sapienza to Via Anticaglia; the Greater Decumanus that goes from Piazza Miraglia to Via dei Tribunali; the Lower Decumanus that goes from Piazza del Gesù to Via San Biagio dei Librai. Three streets that horizontally divide the city from west to east that meet with the hinges that go from north to south. Among the most important places of the city, both for tradition and for tourist attraction, we certainly find Via Duomo, the place where the cathedral of Naples is located, Via San Gregorio Armeno, the now most famous street of the shepherds, visited every year by thousands of tourists from all over the world, Via Costantinopoli, Piazza Bellini, Piazza Dante, Piazza del Gesù, Piazza San Domenico Maggiore. The decumani are real arteries of the city of Naples, although the word decumani is a term of Roman origin, the urban layout of the city dates back to a typically Greek road layout. The upper decumanus is the one located higher up and over the years it is perhaps the one that has been most exposed to the changes that have been dictated by time. The Decumanus Major, which coincides with the current Via dei Tribunali, is perhaps the busiest street in the entire historical center of Naples. The street is much wider than the other two and in fact in ancient times this was the street of commerce, one of the main meeting points for Neapolitan citizens. The Decumano Inferiore, on the other hand, is the best known street of the entire city at a worldwide level, why? Because it is also commonly known as Spaccanapoli. When seen from the hill of San Martino Spaccanapoli divides the Neapolitan city in half with surgical precision, cutting Naples from north to south. All three decumans are now obviously part of the unesco-declared world heritage site. In this regard, in 2017 the American BBC defined the city of Naples as the city with too much history to handle. Yes, because one of the peculiarities of the city of Naples and in particular of its historical center is the almost total preservation of the ancient layout of the Greek era. 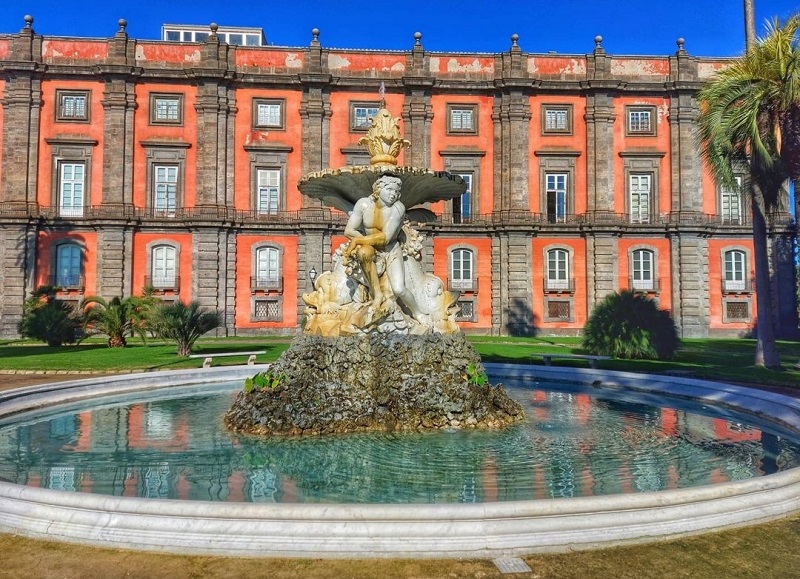 UNESCO has recognized the historic center of Naples as a World Heritage Site. This is also thanks to the vast amount of monuments present in the Neapolitan center. Naples is in fact one of the cities with the highest density of cultural, artistic and monumental resources in the world. Just think of the Royal Palace located in Piazza del Plebiscito and the Reggia di Capodimonte, royal residences dating back to the Bourbon period. It is enough to think about the three castles present in the Neapolitan city and which the Neapolitans themselves often forget to have. Castel dell'Ovo located along Via Caracciolo. The Maschio Angioino or Castel Nuovo, located near the Neapolitan city hall and dating back to the medieval and renaissance period. Ancient residence wanted by Charles of Anjou l in 1200. Among the historical commanders we also find Charles II of Naples, Alfonso V of Aragon, Charles III of Spain, Ferdinand l of the two Sicilies. To finish, the castle that stands high on the hill of San Martino, Vomero district: Castel Sant'Elmo. Positioned in a strategic place to observe the attacks from the sea by possible invaders. The castle stands where today there is also the Certosa di San Martino, one of the most beautiful and successful religious monumental complexes of the entire city of Naples, so much so that it has even been recognized as a national monument, in fact inside it houses the National Museum of San Martino. Among the monuments of Naples that deserve to be visited at least once in a lifetime are also the church of Girolamini, the beautiful tondo of Capodimonte, with its staircase that reaches the beginning of Santa Teresa degli scalzi. The Real albergo dei poveri and Piazza della Vittoria.